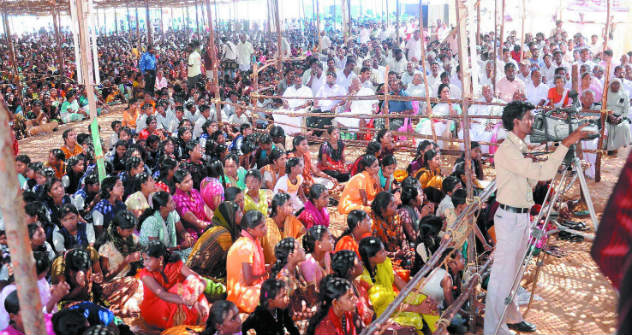 Armenians and Lithuanians are among those most surprised at an unwarranted flare-up of anti-nuclear protests in the Indian state of Tamil Nadu. Although it was in Armenia that the population suffered for six years from power shortages, and in Lithuania two problem-free power units were shut down for no apparent reason.

The ancient town of Metsamor in the Caucasus, near the site of the active Armenian Nuclear Power Plant, lies thousands of miles away from the construction site of the Kunadkulam Nuclear Power Plant in the Indian state of Tamil Nadu. But it’s with bewilderment and sympathy that the residents of Metsamor, just like many others in Armenia, Belarus, Lithuania, Russia, and Ukraine, have learned that the almost finished energy facility, badly needed for the region’s development, has become hostage to environmentalist politicking and to gullible yet misinformed locals.

Instead of celebrating the successful completion of a Russian-Indian project in this hi-tech field, attempts at sinking it have been made under the guise of populist slogans, burying years of efforts by thousands of Indian and Russian construction workers, engineers, designers, and scientists, to say nothing of billions of rupees invested in this promising venture.

“I wouldn’t try to second-guess why this is happening and who stands to benefit from it,” said Vladimir Grachev, a prominent environmental expert who spent years as head of the Ecology Committee of the Lower Chamber of Russia’s Parliament. “But all of this is very reminiscent of the political passions that swept across the former Soviet republics in the late 1980s. The Armenian NPP was shut down in 1989 for political reasons...”

Keep in mind that this is the plant that had withstood the magnitude 7 Spitak earthquake a year before, with its operability remaining fully intact. Yet it was unable to withstand political campaigning, falling victim to power struggles and electioneering.

“For six years the population of Armenia and the entire post-Soviet Trans-Caucasus region suffered from power shortages,” continues Grachev. “ They ended up cutting trees in the streets and breaking up furniture for firewood, like during the Leningrad blockade in wartime.” Eventually, a majority of people voted to restart the power plant. It was brought back online in 1995 with assistance from Russian nuclear experts, and is now generating around 40% of Armenia’s total electricity output. This past June, after the Fukushima, IAEA experts conducted a thorough inspection of the Armenian NPP and recommended extending its service life.

Unfortunately, the anti-nuclear rallies of the 1980s have made their mark on Russia itself. Construction of several nuclear power and heat plants was suspended or discontinued altogether. Bringing them back to life 10 or 15 years after required a lot of additional public spending. Thankfully, Russia has proved capable of doing this. But take the Bulgarian government, which to this day hasn’t been able to raise financing to resume construction of the Belene NPP, which was sabotaged at a very early stage. However, they are determined to see this project through.

At another Bulgarian NPP, the Kozlodui, built by the Russians, political pressure has led to premature shutdown and withdrawal from service of two perfectly operable VVER-440 power generation units. Similar units have been running problem-free at the Paks NPP in Hungary and at nuclear power plants in the Czech Republic. Two exactly similar units at Finland’s Loviisa NPP are considered to hold the record in both the length of accident-free service and economic efficiency.

Sensible politicians in Vilnius are also speaking today of the need to learn from others’ mistakes. There’s a sincere feeling of regret there over succumbing to pressure from the European Union and shutting down two problem-free power units at the Ignalina NPP without any apparent reason. Now Lithuania has to buy much more expensive electricity from the EU and has been begging them in vain for an affordable loan... to build a new nuclear power plant at home. It already has a site and a name – the Visarginas; what’s unclear is who, when, and under which design – Japanese, American, or French – will build it or how to pay for it.

According to the World Nuclear Association, “it’s perfectly clear now that long before that time, the Baltic NPP, already under construction in Russia’s Kaliningrad Region, will come online in this energy-hungry part of Europe.”

Both the Baltic and the Kudankulam NPPs are totally different in terms in their design and execution from the generation of nuclear power plants that include the natural disaster-ravaged Fukushima. The Russian project enjoys the unquestionable advantage of a fitting combination of active safety systems and advanced technical solutions based on “passive” protection principles. These solutions that have already been implemented in the first two power units of the Kudankulam bring them as close as possible to fourth-generation projects in terms of the “overall likelihood of a significant damage to the active zone.”

What’s more, the Kudankulam project takes the region’s specifics into account as much as possible. It uses time-tested technology, components, and systems and draws upon the experience of designing, manufacturing, and operating other power plants with water-to-water reactors. It also makes an allowance for the peculiarities of the local tropical ocean waters that contain large quantities of sea plants, shellfish, and marine fauna. The Kudankulam’s hydro technical facilities perform a rather wide range of functions and comprise custom-developed fish protection systems.

Last but not least, the Nuclear Power Corporation of India decided that, given the arid climate and the needs of the local developed agriculture, the plant wouldn’t be consuming water from the local lakes but would rather be self-sufficient in terms of fresh water supply. The Kudankulam design thus comprises a seawater desalination system.

By the way, “big waters” from the Indian Ocean once came dangerously close to the shore where the power plant is located. It was behind the Kudankulam’s dependable breakwaters that the local population was hiding back then. Is the human memory span really that short?