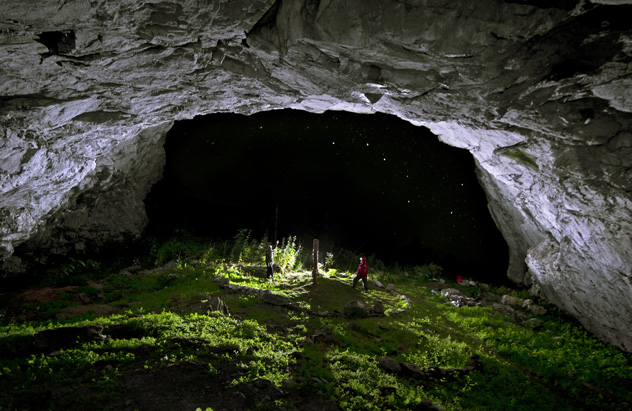 EXCLUSIVE Three expedition members exploring the Kungur Caves in the Ural Mountains in Ural, Russia. Welcome to the place of legend that is one of Russia's oldest and biggest known caves. From incredible rock formations caused by ice to lush vegetation that decorates star studded cave openings the Kungur caves are truly a sight to behold. In local folk myths the two mile-long Kungur caves of the Ural mountains were feared as a place of the underworld and a home to demons. And the cave is not only famed for its haunting past - but is also regarded by scientists as having a near-unique micro climate of ice as well as temperate zones. Top Russian photographer, Victor Lyagushkin, 40, plunged into the depths of the 12,000 year-old network of underground tunnels and sensational rock formations. His mission was to record the work of a team of scientists studying pollution levels in the cave from nearby mines. In the middle ages the spooky maze-like tunnels were believed to have been a refuge for Russia's last pagans who fled Christianity and performed their ancient rituals underground. It is one of the largest gypsum caves in the country. Gypsum is a calcium-based mineral used for plaster of Paris.