The best circuit is in India 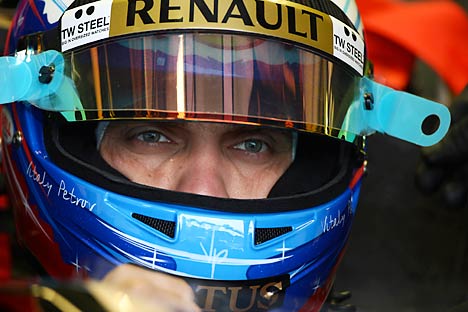 320 kilometers per hour. This speed racer can gather at newly opened Buddh International Circuit in India.

One of the fastest circuit on the planet will welcome its first Formula 1 Airtel Grand Prix  at the end of this month. The audience of more than 150 thousands people will be able to see the rally. Investments were 300 million dollars. However Gran Prix organizers are confident: costs will be repaid very soon.

Russian driver «Lotus-Renault» Vitaly Petrov shared his expectations of coming Grand Prix of India. He also figured out his plans for further races:

«Grand Prix of India is a new circuit – so it's a new challenge. But it’s always not easy. Rivals have sim racing in their teams that has basic settings. This is definite advantage. Truly speaking, I also studied configuration – run Play Station a bit. The main goal for me now is to get in the top ten at three final Gran Prix. I can say it’s quite difficult. It’s not happen to talk about competing with Mercedes this year. They made the car perfect, second half of season it runs very fast. So we are concentrated on getting points – one or two – but regularly. We should keep our 5th place of Constructors' Championship. We must do our best every weekend, minimize mistakes and prepare for the next season.»

Just opened Buddh International Circuit is the fastest on the planet. Source: formula1.com