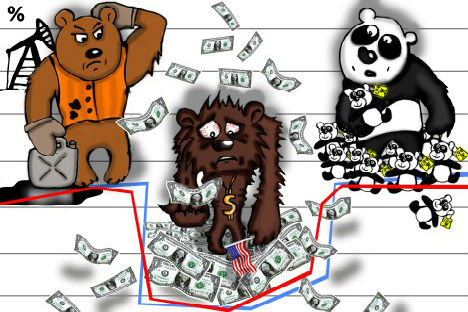 In the 1990s, many economists in the U.S. and Europe predicted that the euro would fail. Y et precious few pointed to the West’s huge debt in the late 1990s - or forecast that even higher debt after 2000 would not only lay low the euro, but also the U.S. and indeed the global economy.

On the contrary: Central bankers closed their eyes to burgeoning debt due to their focus on inflation, while the financial sector not only played along, but benefited greatly.

One exception was Peter Warburton, a British financial analyst whose 1999 book “Debt and Delusion. Central Bank Follies That Threaten Economic Disaster” is bursting with prescient sound bites and warnings. On Warburton’s reading, debt makes the West’s prosperity of the last 20–30 years illusory, despite all the new products around, such as plasma TVs, smart phones and tablet computers.

But government debt levels are actually much higher than usually quoted since they don’t include the huge unfunded liabilities in health and pensions, a problem which will only get worse in the near future as the baby boomers age and the working population falls. If Western economies are in for a long period of stagnation, the problem will be even worse.

The current fears of a double-dip recession are hardly surprising. Despite the promising start by the G20 and periodic bouts of market optimism in recent years, the underlying structural problems of debt and huge trade imbalances remain unsolved. The financial sector is now looking to the U.S. and Europe to fix this colossal collective mess because economists have no new model — hardly surprising after confusing genuine growth with purchases made on debt and the scholasticism of their econometric models. And if Joe Public is clever, he will not only deleverage, but remain deleveraged. That means a higher savings rate, but also lower demand and growth.

So, the market’s answer is to look to the emerging markets for growth — including the credit-financed consumer booms that have been so disastrous in the West. Ironically, it was the Marxists who maintained that capitalism constantly needs new markets.

The West has still not grasped the depth of its problems. Whether S&P’s credit rating downgrade was justified, the wider issue is that the West has been here before, but is still stumbling.

In a recent CNBC roundtable called “Meeting of the Minds: The Future of Capitalism,” former G.E. C.E.O. Jack Welch claimed that as the U.S. saw off the Japanese challenge, it would meet China’s.

Well, yes, Japan’s economy has seen little growth for 20 years due to bad policy decisions, but this island, with just 125 million people and no oil, gas or coal has huge reserves, huge savings, huge monthly trade surpluses, excellent engineers and global leadership in a series of high-tech areas. The Japanese approach of going for market share rather than profit wiped out one sector after another in the U.S. and Europe — and yet it’s hardly mentioned in business school textbooks.

The West, on the other hand, has “squandered its resistance on a pocket full of mumbles such are promises” since World War II with sliding educational standards in the humanities, mathematics and the sciences and, more recently, massive grade inflation at our best universities.

India and China are now catching up fast. There is certainly no guarantee that the Asian giants can escape the low-income trap, let alone reach the sunlit uplands of Western development, but with around 1.3 billion people each, their sheer magnitude puts their challenge to the West on a totally different level than the earlier one from Japan.

Can the West in general afford to wait and see if the “rising tide lifts all boats” theory really works? Or will it be submerged by The Rest long before that happens?

China’s far-sighted, long-term and rational strategy in particular stands in marked contrast to America’s anarchic “no one’s in charge” approach — just as the Founding Fathers intended. Europe is difficult simply because a continent of many nations finds it hard to reach agreement.

But in an increasingly competitive world where The Rest have cottoned to part of the West’s success, amateurism and political grandstanding is simply not good enough. If its elite cannot come together, the West’s future looks bleak indeed.