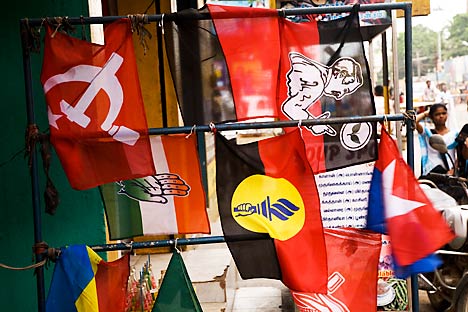 Evaluating opportunities of the political parties in Russia, we should take into account the history of one of the oldest parties in the world. Source: Alamy/Legion-Media

As Russia braces for the Dec 4 elections, it’s time to look at the experience of India and the West in evolving a multi-party system and forging a dynamic opposition, says Andrei Volodin.

On December 4, Russia will hold its parliamentary elections, which will undoubtedly impact on the future of the country. Frankly, I do not pretend to be an astrologer. My task is to tell Indian readers of the challenges that the Russian society is facing, and to evaluate its present condition and prospects from the point of view of the world and Indian political experience.

At the moment, only lazy people do not criticize the situation in the country. Prime Minister Vladimir Putin recently admitted that over the past two decades Russia has developed along the path “inexplicit for the people”, whilst President Dmitri Medvedev called for a radical overhaul of Russia’s public administration. It’s easy to understand that the December 4 polls will place on record both the public’s dissatisfaction with its present-day “miserable” standing and the society’s hope for changes for the better.

This year has witnessed a “global wave” of social and political unrest and social instability, writes American economist Nouriel Roubini. The common characteristic of these protests is that “they express in different ways the serious concerns of the world’s working and middle classes about their prospects in the face of the growing concentration of power among economic, financial, and political elites”.

In Russia, the society is becoming ever more insistent in its demands for concrete action on the part of the government for the country’s modernisation and a sharp strategy of mid-and long-term development. Understandably, the strategy should facilitate Russia’s progressive upward movement and the ascent of its society to a higher level of economic and political equilibrium.

The basic load-carrying structure of predictable development, both in the West and in the East, including India, is the middle class, which, as Eric Hobsbawm once noted, should comprise at least 50% of the economically active population. (In India this figure is slightly lower, just over 30%. However, the impressive absolute value of this stratum – over 300 million people – makes the national political system that much more predictable, and the powers that be do not suffer “acute headache” at pre-election periods.)

During the Soviet era in Russia, the middle class was formed under influence of the industrial development of the country, especially in the 1970s and 1980s. In particular, this section of the Soviet society came to embody the ideas and practices of the democratic and political transformations. Later, this “Soviet-made” middle class, with its extraordinary intellectual and spiritual potential, was subject to “decomposition” caused by “liberal reforms” and expatriation of a considerable part of conscious people. Unfortunately, this situation, i.e. actual loss of the middle class, the main proponents of the civil society,  makes the future behaviour of the Russian political system hard to predict.

While evaluating the current position and opportunities of the political parties in Russia, we should adequately take into account both western and Indian experience, and the history of one of the oldest parties in the world – the Indian National Congress (INC). The Congress is more than just one of India’s leading parties. The INC evolved from a “debating society” for the colonial elite to a party for the masses supported by the people from all socio-political groups of Indian society, largely thanks to the national movement leaders and, first of all, to Mahatma Gandhi. The compelling strategy that Gandhi introduced during the struggle for independence – the tactic of “pressure-compromise-pressure” did not just bring the cherished sovereignty nearer, it also nurtured democratic traditions, such as tolerance and insistence on truth, in the minds of the Indian masses. It is hard to say whether the “Gandhi phenomenon” could ever have taken root on the Russian soil, as Tolstoy and, later, Sakharov never really entered the mainstream. Over the last two decades greed has squeezed out any remnants of the concept of service to society, and in “Yeltsin’s era” people were more likely to talk about the “class of property owners” than the middle class.

Both Indian and Western experience has shown that sustainable and “organic” democracy is achieved by diversifying the economy which we should undertake after two decades of liberal reforms. Unlike India, Russian politics has a weakness in that an opposition, in the modern sense of the word, i.e. a responsible and forward-thinking political force, is yet to be formed. Of course, the Russian left have already come a long way from their rock-bottom image in the 1990s (culminating in rallies which brandished slogans such as “Put Yeltsin’s Gang on Trial”) to putting forward ideas for re-modernizing and re-industrializing the country. Although not everyone understands the tools of the country’s transformation, I am sure the future of Russia lies beyond a left-of-center policy, in the way this is manifested in India and Western Europe. In my opinion, the Russian left should conceptually define their attitudes towards such persistent economic and political phenomena as “Austrian/Scandinavian socialism” or “Nehru’s policy” and weigh in the balance not only the role of the government in the life of society but also the relationships between a “planned economy” and “market forces”, the fine line between intervention and initiatives, and so on. Then the social demand for the ideas of the left will be more constant and consistent.

The positional relationship of socio-political forces in the Russian society is known for volatility; the political parties will also alter. I firmly believe that not one political party in Russia is currently able to single-handedly cope with the socio-economic problems afflicting our country even as these problems are complicated by external circumstances (the world crisis.) This is why, even as we speak, we need to elaborate tools for cooperation between the parties that will be transparent for the society and clear to the people. In India such inter-party cooperation on the national level originated in the 1970s. This work is all the more essential since - as the Indian experience shows - the lower segments of the social “pyramid” shall move from passivity to the state of organized activity and then the “Russian system” shall not be in a position to stop them from turning into a mighty and independent political force.

The Indian experience shows that it is possible to avoid political risks through timely transition from “reforms” to development, i.e. to economic growth based on industrial-scale production, to maximum possible employment and relatively equal, i.e. politically safe, distribution of the national income. These will make possible transition to a two-coalition political system generic not only for India, but also for such highly developed countries like Germany, Italy and Austria. However, it is important to remember that such complex multiparty system is not going to be created by orders from above – it comes as a result of patient compromise and unforced historical development.