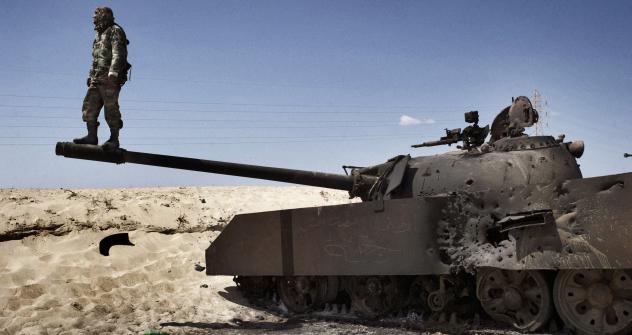 Fearless and fiercely talented, the Russian photographer Yuri Kozyrev recently swept the top Bayeux Calvados awards after winning the Visa d’or News Award for his coverage of the Arab Spring. Colleagues say Kozyrev is well on his way to joining the ranks of the greatest war photographers.

In December 2010, the Russian photographer Yuri Kozyrev arrived in Yemen and found the country on the brink of collapse. He landed in Sana’a, the capital, without a “fixer,” the term that reporters use for a local assistant and interpreter. Wandering the streets, unable to understand the language, Kozyrev said he worked “on the constant verge of failure.” He was a strange and suspicious-looking tourist. Yet his images – groups of gloomy men chewing khat at dusk, veiled women swimming and a sad man carrying a giant fish on his shoulders, foreshadow the arrival of civil war.

The following February, Kozyrev’s editors at "Time" magazine told the photojournalist to move quickly to Cairo to document demonstrations on Tahrir Square. By March, he had been in Libya for nearly two months following the rebels who eventually toppled Muammar Gadaffi. Kozyrev has become one of the most faithful chroniclers of the turmoil in the Middle East. His reportage captured the ferment of the last year in Yemen, Bahrain, Egypt and Libya.

This month, Kozyrev swept the awards at this year’s prestigious Bayeux Calvados Awards, including the War Photographer and Public Choice awards at a ceremony in Bayeux, France. Last month, the Russian photographer was presented with the prestigious Visa d’or News award at the annual Visa pour l’image photography festival in Perpignan, France. There are several exhibits of Kozyrev’s work this season in Europe, including upcoming shows in France and
Spain Britain. His new book, documenting the Iraq war, will be published next year.

“Awards and gallery shows mean nothing,” Kozyrev said in a recent interview. “The profession is about your opportunity to allow people to have a voice. You take a photo, you name the person, you document the historic events of our time. Everybody can be a photographer these days, but ‘I am on Tahrir Square’ is a different story from the story about the people of Egypt on Tahrir Square, which requires much more responsibility.”

Roaming the world non-stop, Kozyrev is well-known as a an intuitive witness to human stories and events. Just days before the Arab Spring, he was shooting a story about people escaping big cities to live in Siberian settlements. His ever-lit cigarette, big lively eyes, tactful and sensitive stories, told over cups of tea, traveled from home to home, leaving memories with the friends he makes on his trips. It is this sensitivity, as well as pure skill, that come through in his work.

Kozyrev’s colleague at the NOOR photo agency, Stanley Greene, said “Yuri has raised the bar on the reporting of conflicts; he made all of us rethink how we cover stories.” Greene said. ”He is a poetic war photographer. His images are full of lyrics and poetry that I had not seen before…. Yuri could become one of the greatest war photographers.”

Portrait of the Photographer as a Young Man

Kozyrev’s photographs have depth and a surprising sense of composition –especially considering the conditions he works under. His first teacher, Valiko Arutyonov, was a member of an underground community of photographers in the Soviet Union described in Vasily Aksyonov’s novel, “Say Cheese,” about Soviet dissidents.

Arutyunov mentored Kozyrev. Then, Kozyrev was chronicling people in small apartments and squats and portraying the creative hum of dissident life in Leningrad, now St. Petersburg. “That was a happy time, when my wife, Regina, a talented designer, and I enjoyed our life in the bubble of wonderful underground artists,” Kozyrev recalled.

But after the Soviet Union collapsed, Kozyrev moved away from his circle and started photographing a succession of post-Soviet conflicts in Armenia, Moldova, Tajikistan and Georgia. Since then he has not stopped moving from conflict to conflict. At that time, he said, he was lucky to meet another mentor, Yevgeny Khaldey, a former Red Army photographer who was famous for his iconic image of a Russian soldier raising a Soviet flag above the Reichstag in Berlin, signifying the defeat of Nazi Germany.

“Khaldey gave me the most important knowledge about our profession, Kozyrev said. “No university can teach you the importance of returning to the same places again and again and documenting the history — to me, that is why we are doing this.”

Kozyrev has been a photojournalist now for more than 20 years. He has covered every major conflict in the former Soviet Union, including two Chechen wars.  He documented the fall of the Taliban 10 years ago, and then lived in Baghdad for nearly eight years before moving back to Moscow in 2009.

Journalists who covered the second Chechen war remember Yusup Magomadov, a 13-year-old boy heavily wounded in a bombardment of his home village of Novy-Sharoi. Both of Yusup’s legs had to be amputated.  Yuri Kozyrev, along with a Dutch writer, Wierd Duk, brought the boy and his mother to Moscow for treatment. Photographs published in a Dutch magazine helped raise money for prostheses. “It was the first and only time I saw tears in Yuri’s eyes, when he was photographing Chechens saying goodbye to Yusup,” Duk said. “They were afraid that Russians would kill the boy.”

A freelance Danish photographer, Mari Bastashevski, described Kozyrev’s work ethic during their reporting together in the Libyan desert last spring: “He’s under fire until 9 p.m. and then editing until midnight. And it is like that every day. ”

The prize-winning photographer is also now mentoring younger photographers. Among his students are Maria Morina, Olga Kravets and Oksana Yushko, who are working together on a documentary project called “Nine Cities,” which returns to a forgotten Chechnya. Kravets said: “Apart from being a great photographer, he has a great eye for the work of others.”

Kozyrev is known as a photojournalist willing to cover the front lines. His photos have appeared in a number of publications, including "Newsweek" magazine and "Russia Beyond The Headlines." Covering the anti-government protests in Arab countries for "Time" magazine was among his most dangerous assignments. In Libya he was shot at and police beat him. He was detained in Bahrain and Saudi Arabia.

He has lost colleagues, including his friends Chris Hondros and Tim Hetherington, two photographers killed in April while on assignment in Misrata, Libya. One might wonder why the 47-year-old would want to go on risking his life. The chief photo editor of the Moscow-based "Russian Reporter" magazine, Andrei Polikanov, is a longtime friend. He said that it is Kozyrev’s “unconditional, fantastic self-sacrifice and faithfulness to journalism,” that keeps him motivated to cover conflicts, and keeps him walking on the Revolution Road.

Anna Nemtsova is a Moscow correspondent for "Newsweek" and "The Daily Beast." Nemtsova has worked in a team with Kozyrev on a number of assignments.