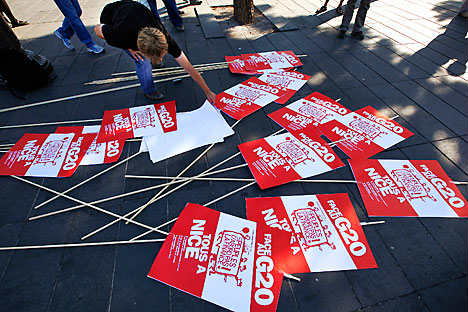 With the eurozone reeling under a festering crisis, all eyes are on the G20 summit in Cannes early November. Can this grouping of developed and developing economies help avert a gathering global economic tsunami?

Want to earn $400,000? Here’s what you need to do – find an exit policy for countries wishing to leave the European Monetary Union. That’s it. If your idea is accepted, the money will be wired into your account by Simon Wolfson, the CEO of British retailer Next Group.

For the moment Wolfson’s money looks safe. No matter what solution economists may come up with, politicians are guaranteed to spike it. Quite simply, the deep divide that runs between the old rich and the emerging countries precludes an agreement on fixing the global economy. In fact, the G20 Cannes summit in November will be watched with interest for the posturing and power play of rival blocs than any constructive brainstorming.

The trouble with finding a solution to what remains primarily a political issue is that what is good economics is bad policy. The G20 is being described as the economic steering committee of a new world order where emerging economic powers have a major say but in reality its very membership is an indication of the status quo. Besides the US, Russia, China, India and Brazil, the G20 also includes the European Union, France, Germany, Italy and the UK. Of its 20 members, 12 belong to the Western axis.

So when headlines scream of the G20 delivering a virtual demarche, asking the Europeans to sort out the euro mess, just who is it really wagging its finger at? Does Nicolas Sarkozy, the G20’s current chair, issue an ultimatum and find it on his desk next morning as the president of France?

The theatre of the absurd continues. The BRICS – the much talked about club of emerging economies of Brazil, Russia, India, China and South Africa – are part of the G20 summit. Less wealthy than the Europeans but flush with cash, the BRICS have offered a bailout plan – recapitalise the International Monetary Fund which can then offer loans to the desperately seeking PIGS – Portugal, Ireland, Greece and Spain.

However, this has been summarily dismissed by the US, fearing a further dilution in Western stakes in the IMF.

Indeed, this is one of the major irreconcilables that blocks consensus. Recapitalisation of the Fund will lead to demands for IMF reforms. Translation: the BRICS’ influence will rise at Europe’s expense. Imagine Russia’s Vladimir Putin controlling the Bretton Woods sisters. Shock! Horror!

There are, of course, some internal differences over how much help the BRICS should offer the West. South Africa is quite clear – do nothing, given that the West’s problems are of its own making. Brazil’s view is that if they help, they want some benefits or at least some recognition.

The Financial Times couldn’t have summed it up better, “The BRICS offer has been rebutted because it’s not in the short-term political interest of the leaders of the US, UK, Australia and Canada to suggest to European leaders that an exogenous bailout is possible. If it were just the BRICS cash, that would be one thing, but in order to maintain influence in the IMF, the English-speaking quarter would have to follow suit. And there’s no desire to do that right now.”

Another contradiction lies at the very heart of the eurozone. It may look like a homogeneous bunch but in reality the eurozone is a rich club with several poor underlings. At one end of the scale you have the powerhouse German economy cranking out a vast array of uber-quality goods. On the other end the underbelly, comprising chiefly the PIGS, is really a tourist economy.

The upshot: every year Germany runs up an annual trade surplus of around $270 billion with these countries. This German surplus is the PIGS’ debt. So the poor eurozone countries are increasingly in debt to Germany.

Before it joined the EU, life was simple for Greece. All it had to do was devalue its drachma, and its economy would become competitive again. Now trapped in the eurozone, Greek central bankers can’t do a thing – except wait for bailouts.

And this is where it really starts hurting. Unless Greece becomes as efficient a producer as Germany it will continue to be in debt. That looks unlikely. Greeks – like the Irish or the Portuguese – are not known for producing Volkswagens or Leicas.

So why don’t the Germans cut adrift the PIGS? Or why don’t Greece and Spain quit the eurozone, go back to the good old days, and enjoy tourism-driven economic bliss? Well, because Germany doesn’t want to lose its captive markets. For the German leadership it’s also a matter of prestige because Germany is Europe’s engine. Germany and France have also been mulling over a European military alliance built around their militaries. If the eurozone collapses, that alliance will be stillborn. You can’t talk practical economics when you factor in such politics. In fact, Luxembourg’s foreign minister Jean Asselborn remarked last year: “I can only warn Germany and France against a claim to power that shows a certain overbearingness and arrogance.”

But why are the BRICS bailing out the rich? It is not because, as some believe, their largest export markets are in the West. On the contrary, they are trading more among themselves, slowly edging out the West from the world's fastest growing markets. The BRICS also share common goals. It is in their interests to reform the global financial system, which has been ruined by corruption in Western markets. Inflation, which has resulted from the currency manipulations practiced by the West, has impacted almost all BRICS countries.

Banking secrecy is yet another of the irreconcilables. Switzerland and the UK lead the way in sheltering tax cheats which has led to the growth in unaccounted wealth.

Currently, Athens only has cash to operate until mid-November. Despite a 159 billion euro bailout awarded last year, its debt is a staggering 162 percent of GDP. And, therefore, staggering amounts of cash will be needed to service Greece’s debt as also that of Portugal, Spain and Ireland. The bailouts will not achieve anything on their own except lead to more bailouts because the basic problems won’t go away.

In fact, this lend-n-pray approach may quickly lead to the exit of weaker members. A collapse of the euro will send shock waves through the global financial system. At a time when growth is close to zero or negative in the West, China’s GDP growth is slowing, and Indian manufacturing growth has stalled, that would only deepen the recession.

Meanwhile, as the euro slips closer to the cliff, European finance ministers fiddle, France and Germany duel verbally, and the rest of the world’s leaders kick the can down the road.

So, take your bet. Wolfson’s money is safe. Your money is not.