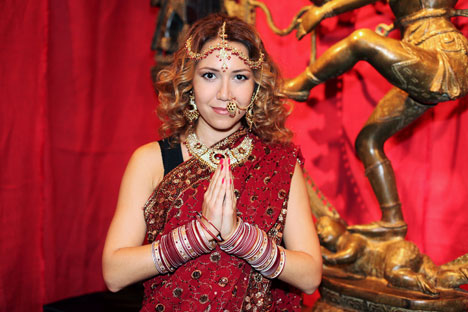 It’s not so easy to imagine an appropriate blending of ancient culture and modern technology yet this is exactly what “Magic India” is about.

Indian exhibition titled “Magic India”, which was launched in Moscow October 15, at the Vetoshny art-centre, completely justifies its name. Its creator Georgy Aistov definitely put a lot of care and effort to transform a several-room space in the building in the very heart of Moscow (with Red Square and the Kremlin only a stone’s throw from it) into a truly Indian area. On entering, a guest of the exhibition is carried centuries back to the India of ancient times, as if with the help of a magic wand.

The ancient Indian history is portrayed through historical objects, but the impression is enhanced multiple times by the means of applying modern technologies using 3D effects and audio-visual media to narrate legends and convey the monumental scenes of Indian epics.

The exhibition takes viewers to a fascinating tour around episodes of Indian history, educates them about Ramayana and Mahabharata scenes and plunges them in the Indian everyday reality. Visitors to the exhibition find themselves enchanted by sweet musky scents of Indian fragrances mixed with almost hypnotizing rhythms of the Indian musical instruments.

I got the impression that not only the exhibits but also the very structure of the exhibition was meant to convey the ambience of India to a Russian viewer. The exhibition was located in several adjoining scarcely lit rooms with doorways often half-hidden with curtains. Each room was adorned with varying decorations and there was a different musical accompaniment. But those changes of decorations and transitions from solemn measured music rhythms perfect for meditation to breezy and vivacious instrumental tunes was smooth and natural, so symbolic of Indian view of the world, multifaceted and nurtured with different non-conflicting cultural influences merging one into another. No sharp angles, no annoyingly bright lights. Instead there was soft semi-light and muffled sounds.

Entering the first room, I found myself in almost complete darkness and even felt a little lost, surrounded by all-engulfing sounds of the Indian music.  When my eyes felt a bit used to the somberness around me, I headed to the slide film stands where photos depicting Indian life were shown in a slide-show regime, giving a viewer a chance to enjoy the ensemble of stories, faces, emotions that those black-and-white photographs depicted. The solemn musical background contributed to the wistful state and attenuated the effect of the pictures creating an even greater illusion of immersion into the depth of times in this Indian microcosm.

Next room acquainted viewers with paintings and statues of Indian gods. The famous statue of Shiva was certainly the main attention drawer. In this room one could hear the story told in a soft voice with the source of the voice unknown, which made the whole impression even more mystifying.

I passed several more rooms admiring chairs, carpets, musical instruments, clothing items vividly reminding of the historical epochs India went through and inseparable attributes of the time. The combined effect of mosaics, changing colours, beautiful illumination and of course a rich variety of music that accompanied all this created an indelible impression on me.

When I walked out into the Moscow side street enveloped by twilight, I felt a little dizzy and engrossed in thought, and experienced a slightly nostalgic feeling, akin to tearing oneself away from a bright summer dream on a bleak autumn morning. But it was a pleasurable experience immersing myself into the fairy-tale like reality of the Magic India.