A warm climate for investors 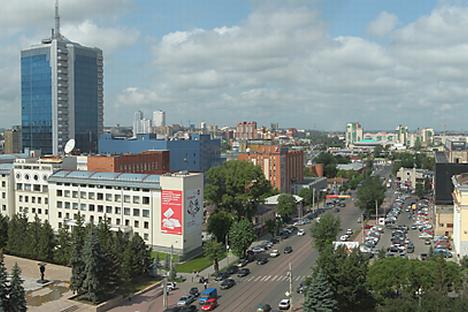 Chelyabinsk is in need of a new type of industrial production.

Recently, a delegation for the Chelyabinsk region, which included representatives of 20 leading companies in the area, made its first official visit to the United States. The group held negotiations with major U.S. corporations in Chicago, visited Silicon Valley and met with representatives of Google and Bank of America. The delegation, headed by Mikhail Yurevich, governor of the Chelyabinsk region, urged American companies to invest in production in the Southern Urals.

Recently, a delegation for the Chelyabinsk region, which included representatives of 20 leading companies in the area, made its first official visit to the United States. The group held negotiations with major U.S. corporations in Chicago, visited Silicon Valley and met with representatives of Google and Bank of America. The delegation, headed by Mikhail Yurevich, governor of the Chelyabinsk region, urged American companies to invest in production in the Southern Urals.

Several important agreements were reached. The company Caterpillar, for example, decided to look into the possibility of expanding its production to the Chelyabinsk Region. This would be the joint-production of engines for railway locomotives based in the Chelyabinsk Tractor Plant. The legendary facility, which, incidentally, is one of the biggest in the world, was created during the era of Soviet industrialization at the beginning of the 1930s with the participation of American specialists. It was redesigned during the Second World War to manufacture T-34 tanks. A total of 18,000 vehicles were produced during the war, which is about one fifth of all combat vehicles rolled out in the Soviet Union. But the factory has fallen on hard times in recent years. Outdated equipment and insufficient funding for modernization have led to the manufacture of inferior products. The factory’s new owners have decided to correct the situation with the aid of the famous American company.

“Chelyabinsk is in need of a new type of industrial production. We need to attract investment and create modern production facilities. I mean not only the construction of new plants, but also the modernization of existing production facilities, because we need to catch up with advanced economies,” Governor Mikhail Yurevich explained.“I can say one thing for sure about the cooperation between the Chelyabinsk Tractor Plant and Caterpillar - there is no single technological operation which cannot be done in Chelyabinsk.”

Before traveling to the United States, the governor visited Germany, Italy and China, where he was faced with the same task - to convince local entrepreneurs of the Chelyabinsk region’s favorable investment climate. And the governor’s international activities were successful.

“Trade between the Chelyabinsk region and the United States is still relatively small, amounting to a little more than $100 million,” Deputy Governor Yuri Klepov said. “But America is of interest to us because it’s one of the largest economies in the world, and its leading companies, as a rule, are leaders in their industries.” The region’s leadership has set itself the task of directing U.S. technology and investment to the Chelyabinsk region, which is competing with other emerging markets.

In Chicago, the Chelyabinsk regional delegation took part in the 19th annual meeting of the U.S.-Russia Business Council (USRBC).

Governor Mikhail Yurevich explained to the members of the USRBC why he believes the market in the Southern Urals is promising for American investors. Many enterprises in the region are developing dynamically, and the region itself is demonstrating positive industrial growth. If the projected figure for the year end in the whole of Russia is around 4 percent, it is expected to reach 7.5 percent in the Chelyabinsk region. Another factor that works in the region’s favor is its advantageous geographical location in the center of the country, which simplifies logistics. Products can be sold not only in Russia but also neighboring Kazakhstan and other CIS countries - and this too is a potentially huge market. It is also important that the Southern Urals, which is known for the high level of its education system, is home to a number of powerful research institutions, as well as highly skilled engineers and scientists.

A Future in Education

Chelyabinsk Governor Mikhail Yureyevich wrapped up a weeklong visit to the United States earlier this month following meetings in California and Chicago, where he fielded questions about Russia’s investment climate and copyright laws from representatives of major U.S. corporations like Google and Bank of America.

The official was on a mission to convince American manufacturers to bring production to Chelyabinsk. Just as important to his region’s future, Yureyevich was also on hand to foster an internship program for Chelyabinsk State University students to intern at American companies, a program supported by the Washington, D.C.-based American Councils for International Education.

Such potential is highly valued by the American company Emerson, which has successful experience in the region. In 2004, the company became a strategic partner of the Chelyabinsk company Metran. Since 2009, Metran has been developing and manufacturing instrumentation and tools as a fully fledged part of the American corporation. Moreover, almost 70 percent of the engineers working in the Southern Urals are involved in international projects. The Chelyabinsk Emerson production is the largest in Russia, employing more than 1,000 people.

Recently, Metran, together with the South-Ural State University, established the Global Engineering Centre, which develops and manufactures automation equipment for the whole world.

The region also cooperates actively with the Finnish company Fortum. Corporate management recently allocated 73 million euros for the installation of two gas turbines, which will replace outdated equipment at the local thermal power station. They will also reduce the amount of emissions into the environment 15-fold.