Freedom to choose the destination for Russian gas 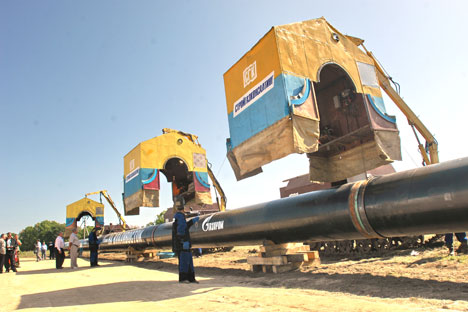 With a possibility of building pipelines to Japan and South Korea and a new infrastructure allowing for switching gas flows, Russian gas producers have a wider choice of export directions.

The fundamental documents governing the operation of the single Asian energy market are slated for signing in July 2012, State Duma Deputy Speaker Valery Yazev promised. Gazprom is already supplying liquefied natural gas (LNG) to Japan and South Korea and is conducting talks to lay pipelines to those countries. Simultaneously, new pipes are being built toward Western countries. In the future, this infrastructure will allow for switching gas flows to wherever it is more profitable.

A pine forest runs down the coast, near the leaden waters of the northern Baltic Sea. Emerging right from beneath the shore’s wet sand are pipes that will carry gas from distant Western Siberia to Lubmin, Germany starting in November. The Nord Stream pipeline is laid deep undersea. The underwater part alone, stretching from Russia’s Vyborg to Lubmin, measures 1,224 kilometres. After that, gas produced in wells of the Ob River Basin is pumped through other pipelines for a few thousand more kilometres.

“Along with my colleagues from the Asian Parliamentary Assembly, we have come up with the concept of a single Asian energy market that will reflect the key principles of international energy cooperation. In preparing the declaration, special emphasis will be placed on the principle of respecting state sovereignty with regard to natural resources and ensuring the safety of international energy transport,” Valery Yazev said. “Reconciling the interests of the world’s largest energy consumers such as China, India, Japan and South Korea with those of energy producers is not an easy task, since the latter want to sell at a high price, while the former want to buy cheap.”

To find its way in this flurry of often opposing assessments and desires, Russia is rapidly creating new routes to deliver its gas. The Nord Stream was the first major gas pipeline built to Europe after the collapse of the Soviet Union. It bypasses all traditional transit countries to the north, thus avoiding associated risks. Next in line is the construction of the South Stream, a pipeline leading to Europe that would take the south bypass.

“Russia is currently extracting 650 billion cubic metres of gas per year, with gas reserves estimated to last for more than a century. This will permit us to not only provide supplies to Europe, China, South Korea and Japan, but also to encourage socio-economic development in our country,” Valery Yazev stated recently in Murmansk. “By 2030, Europe will be consuming around 600 billion cubic metres of gas per year. It is our main market and we are perfectly aware of that. We have contracts running through the 2040s.”

To honour all its contracts, Russia needs to supply gas in all directions while increasing production. The plan is to boost gas output to 1 trillion cubic metres per year by 2030.

However, while Russia has a long history of selling gas to the West, the Eastern market is still evolving.

“Diversifying export energy markets and commodity structure is the major focus of Russia’s foreign economic activities. This will permit us to increase our share of hydrocarbon exports to Eastern countries to 10–13% by 2015,” Deputy Energy Minister Anatoly Yanovsky said in an interview with South Korean newspaper JoongAng Ilbo.

Negotiations have been difficult. For one, Russia has been in talks with China for over five years now. Gazprom and CNPC inked their first agreement on gas supply to China in March 2006, for 68 billion cubic metres of gas after 2011 – a preliminary agreement stipulating delivery along two routes. Gas for the first, Western pipeline, with a capacity of 30 billion cubic metres, is to be provided by the Chayanda and Yamal fields in Western Siberia. The second, Eastern gas pipeline, with a capacity of 38 billion cubic metres, will link China with fields in Eastern Siberia and Sakhalin. Construction will begin as soon as the contractual gas price is settled, but it is still up in the air. China is willing to pay a maximum of $250 per 1,000 cubic metres, while Gazprom wants at least $350. The most recent attempt to resolve the deadlock was made when Chinese President Hu Jintao met with Russian President Dmitry Medvedev on the sidelines of the St. Petersburg Economic Forum in June. The final decision was then postponed until the end of the year.

On 5 August, Gazprom and South Korea’s Kogas approved the Roadmap, a plan of action for supplying pipeline gas. If everything goes according to the plan, a pipeline will be laid across North Korea to the Southern republic. The gas from offshore fields in Sakhalin will be pumped through the recently built Sakhalin-Khabarovsk-Vladivostok pipeline, which measures 1,350 kilometres. The first phase of the pipeline, with a capacity of 6 billion cubic metres, will go into operation in the third quarter to meet the needs of the Primorsky Territory. Later on, the pipeline’s capacity will be expanded to 30 billion cubic metres – enough to sell gas to both Koreas.

For now, however, while pipeline contracts with large consumers in the Far East have not yet been signed, Moscow has room to manoeuvre, experts say.

“In terms of transport costs, it is very convenient to supply gas to Europe from Western Siberia, and to Southeast Asia from Eastern Siberia,” says Dmitry Aleksandrov, head of the research department at the investment company Univer Capital.

While the network of main pipelines in Russia’s Far East is still under construction, there is no direct route for supplying gas from Eastern Siberia to the European part of Russia and to Europe. Soon enough, however, the two gas transit systems will be linked.

“Constructing gas liquefaction plants has been a top priority. Some 10 years ago, few people in Russia had heard of LNG, but now Sovcomflot, the state shipping company, already boasts eight LNG carriers with two more under construction. All of them ship gas from Sakhalin gas production projects,” says BCS analyst Andrei Polishchuk.

These factors combined will give Russian gas producers freedom to choose between export directions: the gas can either be sent to any European country or, with a liquefaction plant in the Far East, to any country in the world. Or it could even possibly be pumped through pipelines to either of the Koreas or to China. In this case, whether or not any particular country wants to buy Russian gas will cease to be of crucial importance. As Dmitry Aleksandrov sums it up, everything will be determined by free market prices.