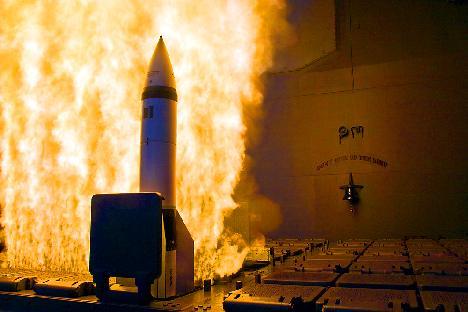 A new ABM proposal promises protection from asteroid strikes as well as missiles, according to Russia’s ambassador to Nato.

Having failed to extract a legal guarantee from the US that its Europe-based ABM (anti-ballistic missile) facilities are not directed against Russian nuclear forces, Russia is hoping to overcome its fears with a bold new plan.

The newspaper Kommersant has learnt that a missile initiative – code-named Strategic Defence of Earth ,  recalling the Reagan-era Strategic Defence Initiative – is being discussed in Moscow. The project proposes a joint system involving the US and Nato and is designed to protect the whole planet against not only missiles, but also asteroids, debris from comets and other threats from outer space.

The proposals are said to be reminiscent of the American Star Wars project, in that the system would monitor the space around the Earth and have striking capabilities to destroy any threatening objects as they approach.

“Currently, the US missile  defence system is aimed exclusively at protecting the country against missiles launched from somewhere in the Middle East,” said a diplomat close to the project. e_SDLq The new plan involves bringing together air, missile and space defence.”

A Kommersant source added: “Missile defence is currently being promoted by Washington as a configuration just  to solve the global problem of shielding America and its allies against missile threats. Our concept offers them an even more global challenge: to save the world. And it  won’t be alone, but together with us.

“There is already an archetype for this in American  culture. Remember the movie Armageddon , where Bruce Willis saves the Earth along with the Russian [cosmonaut] Lev Andropov, who hangs around the universe in a  trapper hat with a wrench and a bottle of vodka. ”

One of the key elements of the Russian proposal, according to Kommersant ’s sources, is to put the new space defence system under the control of the United Nations. If adopted, the system would certainly resolve Moscow’s concerns about the Euro-ABM system. But experts believe that Russia’s new venture has little chance of changing the course of negotiations with Washington over missile defence.

“This approach has the  right to exist. But it does not affect the other ABMs America is currently building in Europe,” Fyodor Lukyanov, editor-in-chief of the journal Russia in Global Affairs , told Kommersant .

According to the newspaper, the concept has been presented to President Dmitry Medvedev. After reading the document, the president is said to have written the word “interesting” on it. He has instructed Dmitry Rogozin and foreign policy presidential aide Sergei Prikhodko to refine the proposals.

Mr Prikhodko was unavailable for comment, while  Dmitry Rogozin declined to speak to Kommersant .

Mr Medvedev’s interest in the initiative comes as no surprise to one expert, who claims that “Dmitry Medvedev likes different innovations. The bolder and more creative the idea, the better chances it has of pleasing the president.”