Putin resets Russia-China relations ahead of his return to presidency 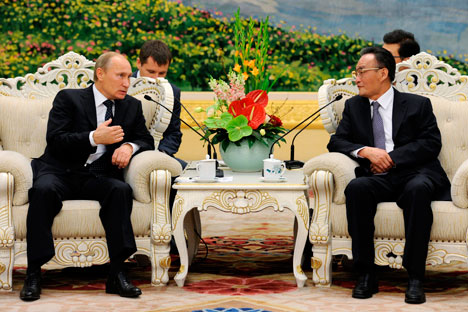 Russian Prime Minister Vladimir Putin made his first overseas visit to Beijing in October just a few days after the announcement of his politically pre-planned return to the Kremlin as President early next year at the plenary session of the ruling United Russia party.

Apparently, the two key events were not interconnected, but the need for Putin to go on a trip to Beijing had never been so pressing in order to “reset” the Russia-China relations in the backdrop of President Dmitry Medvedev’s well-meaning but somewhat botched efforts to “reset” the Russia-US relations during his presidential term.

While Medvedev’s “reset button” did not in any way tangibly improve the relations between Moscow and Washington over deployment of US missile shield in Eastern Europe and, more recently over Libyan, Syrian and Palestinian issues, the military and energy cooperation between Russia and China, the two main areas of the strategic partnership, faced unprecedented threats as the second wave of global financial crisis largely loomed over Russia.

Russian government’s senior level officials were at great pains to emphasize at the end of Putin’s visit that his trip to China had mainly economic purposes on the agenda, noting that it was planned ahead of his announcement for the 2012 presidential bid. They also stated that it viewed China as an important geopolitical partner as well as the largest consumer of Russian energy resources in the future.

In reality, Putin’s visit to China, the first foreign trip since he revealed plans to reclaim Russian presidency, was well-choreographed to provide him an opportunity to reassert, in a way to relaunch himself on the world stage, in order to recreate a perception that Russia was going to set up an alliance with China that would give the Kremlin more leverage in negotiations on many global thorniest issues with the US and European Union, in the near future.

In Beijing, Putin co-chaired the 16th Russia-China regular meeting after which he said Moscow and Beijing have built close ties in political and humanitarian spheres, but economic relations have often been faced with difficulties, implying that another main purpose of his visit was to finalize the tough ongoing negotiations over the massive but elusive Russia-China natural gas deal. In addition, China and Russia have been struggling to solve the debt issues over Russian oil.

According to many Russian observers, Putin’s visit to China marked the next stage of Russia’s efforts to build a deeper and trouble-free bilateral relations between the two neighbours who supposedly claim close friends and allies, but in fact economically and militarily are quite serious rivals.

The announcement of arrest of a Chinese man, identified as Tun Sheniyun, on the eve of Russian PM’s trip, for allegedly trying to gain details of the Soviet-era S-300 surface-to-air missile system through bribery seemed to bear out the undercurrent of this rivalry between the two giant neighbours. What was more mystifying to the observers was the fact that he had been detained in Moscow on October last year but his arrest was kept secret until the Putin’s visit.

During the visit, Russia and China signed a number of trade and economic deals worth $7 billion, showing a solid effort to move beyond energy-based economic ties between the two countries, with Putin at the talks with his Chinese counterparts laying more emphasis on Beijing for the Kremlin’s foreign policy, stressing that the trend toward greater bilateral cooperation would continue under his presidency after the recent period of Russia’s unsuccessful rapprochement with Washington under Medvedev.

Trade between Russia and China is recovering after the first global financial crisis and may hit $70 billion this year. The maximal trade indicator of the pre-crisis year 2008 was less than $56 billion. That was the highest pre-crisis indicator.

“Diversification of trade and economic relations is our goal. We will give full support to industrial cooperation, to the formation of technological alliances, to the fulfilment of infrastructural projects and to the enlargement of reciprocal investments,” he said.

Russia and China developed a set of instruments for upgrading the quality of economic interaction, Putin said. He referred to the investment cooperation plan and the program of interaction between the Russian Far East, East Siberia and Northeast China.

Russia has huge tracts of undeveloped territory in the Far East. Just across the border, hundreds of millions of Chinese people are crammed into a far smaller area. A radical shift in the Kremlin’s policy now may allow enough time to build up the Far East economically and demographically, which just might be enough too to resist Chinese expansion when it comes.

The sides at their talks also focused on the structure of bilateral trade, the expansion of mutual investment and cooperation in high-tech industry, and the implementation of long-term energy projects.

However, the long-expected $1 billion mega gas deal to deliver natural gas to China was not signed. In fact, the deal marred by the disagreement over a price formula was not even included in the agenda of talks in Beijing.

On September 27, 2010 during Medvedev’s official visit to China, an agreement on the basic terms of Russian gas supplies to China was signed. It set out the main commercial terms for future natural gas supplies, including volumes and the starting date, the 'take-or-pay' level, and the level of guaranteed payments.

Russia's gas giant Gazprom and China’s oil and gas company China Natural Petroleum Corporation  (CNPC) were expected to sign a final agreement on a price for gas deliveries at the St. Petersburg International Economic Forum in June but it did not materialize.

Gazprom Deputy Chairman Alexander Medvedev said in September that the sides had finally agreed on a price formula for Russian gas exports and the deal could be signed by the end of 2011.Under the future contract, Gazprom may deliver up to 68 billion cubic meters of gas to China in a 30-year period.

Speaking to reporters after his talks in Beijing, Putin tried to play down the fact of not signing of the gas deal, saying economic cooperation of Russia and China is not limited to fuel supplies as the two countries are involved in numerous projects in traditional cooperation areas and high-tech industries.

"The discussions on a price formula are of course, pivotal. The buyer wants to buy cheaper and the seller wants higher prices. We do not bargain at the political level, this is the task for our companies. I think they would find a fair, mutually beneficial solution to this issue," he said.

"I do not think that natural gas supplies are key to our cooperation. Our cooperation is multi-faceted and it becomes more and more diversified. I think we should make cooperation in high-tech spheres our priority," the Russian Prime Minister said.

He also said Moscow and Beijing should not focus on traditional cooperation areas, such as machine-building and aviation, but also on other spheres including nanotechnology, biotechnology, IT and medicine.

Currently, the two countries are studying numerous draft deals on hydrocarbon extraction and supplies, including joint projects to prospect and extract hydrocarbons in Russia's Republic of Udmurtia in the Volga area, joint participation in the Sakhalin-3 project in the Far East and in the Magadan-1 project to develop shelf hydrocarbon resources.

The western route is the basic and Russia's gas export monopoly Gazprom plans to start building the Altai gas pipeline, estimated to cost $14 billion, in the middle of this year and launch it at the end of 2015.

The PM also said that Russia resumed electricity supplies to China and now studies the possibility of building more power plants on the Russian territory.

One of the most important agreements reached during Putin’s visit, was the deal that two sides signed to set up a Russian-Chinese Investment Fund (RCIF) worth about $4 billion by two sovereign wealth funds, Russian Direct Investment Fund (RDIF) and China Investment Corporation (CIC) to invest $1 billion each in a direct investment vehicle with a 70 percent allocation to Russia and 30 percent to China.

The Russian Direct Investment Fund will control RCIF's management company. Russia's state-run bank VEB will be a strategic partner of the fund and provide financing.

"With reliance on the successful construction of the Tianwan nuclear power plant we will develop closer cooperation in nuclear energy, and using the most advanced world technologies and taking into account possible risks, we will reduce these to almost zero," Putin said at the press conference after talks with his Chinese counterpart Wen Jiabao.

All in all, relations between Russia and China consist of a political dimension that is clearly and extensively delineated, while the economic dimension remains rather superficial and muddled.

The bilateral economic relations are complemented by the Russian-Chinese political relationship, which is very strong compared to other countries. In fact, the Moscow-Beijing strategic partnership is more extensive, multifaceted and diversified than the political partnership between China and the United States or the strategic and other types of cooperation between Russia and the US. Political relations support economic ties, built up over the past 15 years.

It was therefore no wonder that fresh from his visit to Beijing, Putin said in Moscow he saw China as a reliable partner, not a threat to Russia.

"For us China is a partner, a reliable partner and we see the readiness of the Chinese people and the Chinese leadership to build friendly, neighbourly relations with us and search for compromise on difficult issues," he said in an interview to Russia’s three national TV channels.

He also said Russia "has no plans to compete with China" for global leadership, stressing, "China has other rivals. Let them sort it out between themselves."

Answering a question what he thought about his “hawkish” image in the West, Putin said: “First of all, the hawk is a good bird.” Responding to a follow-up question, “But surely you are not a dove,” Putin said this was against clichés.

“Now as before we will continue to pursue a balanced policy aimed at creating favourable conditions for the country’s development,” he said. “This means we want to have good-neighbourly, friendly relations with our partners.”

In Beijing, Chinese President Hu Jintao warmly welcomed Putin as “an old friend of Chinese people.” But despite China’s open support to Putin, Beijing is apparently seriously concerned about a resurgent Russia, particularly in Central Asia of former of Soviet Republics. It feels its energy assets which it has built after the collapse of the Soviet Union, are threatened by Russia as it tries to reclaim its former sphere of Soviet influence in the Central Asian countries.

As a whole, even if the level of bilateral cooperation between the two countries, remains small in absolute terms and the process of overcoming deep mistrust proves to be a difficult one, Putin through his visit to Beijing helped shape the world perception that Russia-China alliance was moving forward. Recently it was also witnessed at the UN Security Council, when Russia and China both vetoed a resolution recommending sanctions against Syrian President Bashar al-Assad’s government for brutal crackdown on opposition.

The old mutual suspicions between the two countries have not been completely forgotten, but new common interests and shared approaches in the international arena are helping to soften their edge. Under Putin’s coming presidency, which, according to Russian media, may last two terms, six years each, China and Russia relations may indeed be entering a new era of bilateral cooperation.