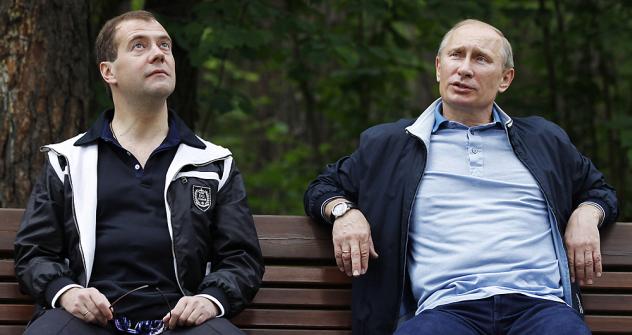 Face value: Mr Medvedev is seen as a democrat and a liberal, and Mr Putin as a conservative supporter of strong government. Source: Reuters

Analysts are studying the motivations behind the rulers’ proposed reshuffle – and trying to predict the potential outcomes.

The beginning of the parliamentary election campaign has been marked by a number of resounding statements from the country’s leading politicians, stirring up Russia’s political scene.

The announcement by President Dmitry Medvedev at the Congress of the United Russia party that he was nominating Prime Minister Vladimir Putin to be president was one such statement. This was closely followed by Finance Minister Alexei Kudrin’s resignation.

Subsequent in-depth interviews given by the president and prime minister have  attracted the close attention of the world’s media; political analysts are now guessing at what is behind the tandem’s recent decisions and trying to predict how Russia’s political system will change as a result.

The Putin-Medvedev reshuffle immediately gave rise  to speculation that the job swap had been agreed upon four years ago, on the eve  of the previous presidential election. Indeed, Vladimir Putin seemd to confirm this in his interview to three national TV channels.

However, Igor Yurgens, chairman of the management board at the Institute for Contemporary Development (where Mr Medvedev chairs the board of trustees), thinks it unlikely that an agreement was made in 2007. In an interview in Kommersant , Mr Yurgens said the ruling  tandem had to agree to the swap under the pressure of various circumstances, noting that Mr Medvedev only recently made it clear he  was ready to run for another term in office.

The president went on air to explain the rationale behind his decision, maintaining  that it was because Mr Putin was the most powerful politician in the country with a rating slightly higher than his own.

According to Igor Bunin, president of the Centre for Political Technologies, this makes it clear to everyone that Mr Putin is behind the wheel, and that it was up to the PM to decide whether Mr Medvedev should seek another term or not. “Vladimir Putin has many reasons to run for presidency, but one of the main reasons I think is his belief that the system he had created requires political stability to survive. Apparently, Putin was not sure whether Medvedev could maintain it, with its modernisation and political reforms,” he said.

Vladimir Putin’s bid for a third presidential term was met with mixed reactions from global politicians. Many foreign media organisations reported concerns that Russia could see yet another period of political stagnation – typical of the Soviet Union under Brezhnev. Mr Putin, however, rushed to allay these fears, and rejected the comparison as absurd, saying that none of the postwar Soviet leaders had worked as hard as him or Medvedev.

According to political analyst Dmitry Orlov, it is clear that Mr Putin is returning as the “supporter of modernisation and development, not stagnation”. Mr Orlov told news agency RIA Novosti: “A new Putin is returning to Russian politics. This Putin is the supporter of modernisation, positive change, and a new approach to creating a new interface for communication between the authorities and society.”

Mr Putin’s article in Izvesti a, in which he suggests creating the Eurasian Common Economic Space based on the Customs Union of Russia, Belarus and Kazakhstan, has also provoked heated debate. Many observers sounded the alarm bell, seeing this as something akin to the  recreation of the Soviet Union. Mr Putin, however, dismissed those concerns, stating that Russia had no imperial ambitions in post-Soviet regions.

According to Vladimir Zharikhin, deputy director of the CIS Institute, the idea of  creating the Eurasian Union is fully compatible with the emerging geoeconomic situation. “The post-Soviet nations have realised that  globalisation is, in fact, taking the shape of large economic clusters,” he said, going on to explain that Mr Putin’s initiative is an important part of his election campaign. “He has begun to outline the external perimeter of Russia’s strategy for the next few years.”

The Russian media have created a distinct image for each of the ruling tandem members. According to public.ru, the online library of Russian media, Mr Medvedev is largely seen as a democrat, liberal and patriot, whereas Putin is thought of as an experienced politician, a conservative and supporter of a strong government. Moreover, many experts predict that the idea of a tandem may soon lose its appeal, claiming that Mr Putin will simply concentrate most of the power in his own hands – again.

The leaders’ plan to swap roles has not affected their popularity. The latest Levada Centre poll shows that 68pc and 62pc of Russians approve of Mr Putin and Mr Medvedev’s work respectively.