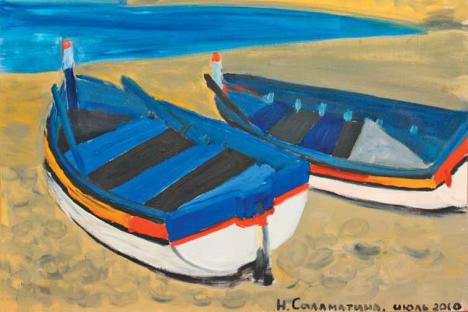 "My pictures are my smiles. I give them to the ones I love". Drawing by N. Salamatina

The American-Russian Children's Home works with doctors and artists to make life better for kids with cancer.

The charity foundation American Russian Children's Home has as acronym that conveys a special meaning in both Russian and English. In Russian, the abbreviation is DAR, the Russian word for “gift.” In English the abbreviation is ARCH, a “bridge” between Russia and America for the sake of helping children.

The little patient with huge round eyes and long blond locks called Barbie is only two-and-a-half years old. She dashes around the hospital ward, even though she’s been told not to run.  Attached to her little chest around-the-clock is an intravenous drip. It provides the medicines necessary to keep her alive. Barbie has an acute form of aplastic anemia. She is just one of the patients at the Russian Federal Scientific and Clinical Center for Children’s Hematology, Oncology and Immunology. Barbie’s grandmother stays with her at the hospital. Both her parents are far away and cannot come visit often: Her father works, and her mother is at home taking care of her younger brother. Barbie is angry at her parents, so now her grandmother doesn’t let the child out of her sight. She is ready to stay by her granddaughter so long as her presence is helpful. The doctors have told her that Barbie’s illness can be cured, but it is extremely important to avoid any secondary infections, particularly fungal ones. In children with blood diseases, fungal infections are potentially fatal. A very expensive medicine called Vifend helps to keep any fungus in check. Barbie’s life depends on Vifend, and one of ARCH’s first efforts was to raise the funds necessary to save this little girl. The money for her medicines was transferred to the Give Life (Podari zhizhn) foundation.

In this way, ARCH does everything in its power to help solve extremely serious problems. Lately, ARCH has seen more and more cases of oncologic, immunologic and hematologic illness in children. This is not necessarily because more and more children are suffering from these terrible diseases, but because doctors are beginning to identify these diseases at earlier stages.

“In diagnosing the illness at an early stage, we have much reason to hope that the child will be cured,” said Ekaterina Dubrovina, the founder and president of ARCH. “If we begin to fight, then the illness will retreat.”

Dubrovina is a pediatrician who specializes in hematology and oncology. But not all ARCH supporters are doctors. The organization also works with the artist Ana Tsarev, the Holy Nikolaevsky church in New York, Tastyimage.com, and the company Valerio 888, among others.

“The ideology of our charity foundation is this: We promote the creativity of some children in order to help others,” Dubrovina explained. “For example, last April ARCH worked with pupils at the U.N. school for children of Russian diplomats in New York to prepare a puppet show at Easter, which raised money to help children with cancer. In late May, the Russian schoolchildren in New York raised additional funds with festivals, a fair and sales. In cooperation with ARCH, they also put on a production of Nikolai Gogol’s play “The Marriage.” The first performance was for parishioners of the Holy Nikolaevsky Church, the second was for their school. The idea the foundation hopes to promote with such events is “children helping children.”

“We help to cure some children while teaching others compassion. Our foundation is fairly young, so we have only managed a few small drives so far, but absolutely every penny has gone to the Give Life foundation to buy the necessary medicines for our little patients,” said Dubrovina.

The money raised by ARCH goes to support treatment programs developed in specific institutions, including the Russian Federal Scientific and Clinical Center for Children’s Hematology, Oncology and Immunology and the Memorial Sloan Kettering Cancer Center in New York.

Besides donating money and medicine, ARCH sponsors also work to improve the children’s spirits and quality of life. For example, American artist Ana Tsarev donated 20 of her works to the center in Moscow. These paintings feature motifs from Russian folk tales and were used to decorate the center.

“The idea behind this gift was to introduce Russian folk tales into the lives of these sick children and make those tales come true,” said Dubrovina. “I should stress that a no less important aspect of ARCH’s work is the popularization of Russian culture among children and young people in America. We plan to hold classes in arts in which Russia has a centuries-old tradition – acting, dancing, music, and literature – to be taught by Russian émigré specialists.

The knowledge of her organization’s positive impact helps sustain Dubrovina as she struggles with the difficulties of running a charitable foundation.

“[There are] huge amounts of paper work and red tape; difficulty in finding premises for our various events. But harder still is the fact that people do not trust charity foundations,” said Dubrovina. “This is for obvious reasons: Money collected for good causes is often diverted. The result is that major sponsors do not like to support charities. In fact, our most important supporters are private individuals who contribute small sums. To provide funding for children in need more reliably we work closely with the Give Life foundation and with the Scientific and Clinical Center in Moscow.”

In addition to helping sick children, ARCH also has plans to help children who have been cured transition back into normal life. These children will have to return to a world with other children their age who have never seen cancer patients before.

“We are planning to start camps for the rehabilitation of children who have gone through treatment,” said Dubrovina. “We would like to organize these camps in America for children from Russia. We hope to begin work on our first camp of this kind next year.”

In December, ARCH will sponsor two Russian Christmas parties in New York City. It also plans to sponsor an exhibition of children’s drawings, “The Good Way” from the Give Life foundation, also to be held in New York. The show will consist of 83 drawings by children with cancer.

“In March 2011, this exhibition was shown in Moscow at the Pushkin Museum of Fine Arts. That show was made possible by the Give Life foundation, the brainchild of Chulpan Khamatova and Dina Korzun with whom we work closely,” said Dubrovina. “We plan to take this exhibition to several cities in the United States, including Washington. A small part of this exhibition was shown at the Russian Consulate in New York on Oct. 26 during a presentation of ARCH. However, we would like to be able to hold this exhibition in Washington in its entirety so as to attract as much attention as possible to the problem of curing cancer in children and to raise money to be transferred to our Moscow center.”