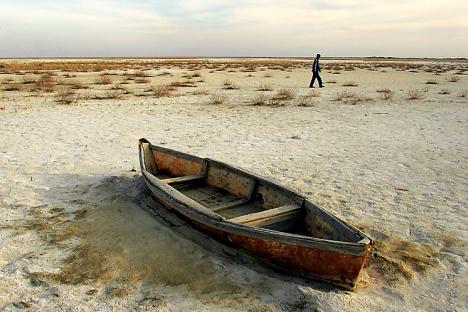 Nikolai Aladin was an underground researcher no one would fund. Yet his results aided the sea’s partial resurgence.

Nikolai Aladin approached the rusting hulk of a small, rusty ship on which the words Otto Shmidt were still readable on the bow. All around, the former bottom of the Aral Sea was walkable, stretching to the horizon and blending seamlessly into the surrounding desert.

This research vessel was named after a famed Russian scientist and explorer of, ironically, the Arctic. When it ended its last cruise in 1996, funded by a Japanese grant, it was the last ship afloat on the sea.

“I went on 25 expeditions on this ship,” Aladin remarked in his stentorian voice on a recent expedition to the sea.

Aladin, a professor at the Zoological Institute of the Russian Academy of Sciences in St. Petersburg, has studied the Aral Sea longer than anyone. He can take indirect credit for the recent rescue of the northern, Kazakh part that has turned the Aral from a symbol of catastrophic environmental mismanagement to one of model rehabilitation.

And yet his career has been anything but easy: except during the brief Glasnost years of the late 1980s, Aladin - portly, pony-tailed, erudite and strongly opinionated - has seen his research and generously dispensed advice often ignored.

He first saw, or rather did not see, the Aral Sea in 1978. In need of a vacation after defending his doctoral thesis at the zoological institute, he went to Aralsk, the northern port, to go diving.

The Aral, the world’s fourth-largest inland lake, is located in the desert east of the Caspian Sea (Aral means island in Kazakh). It is fed by Central Asia’s two great west-flowing rivers, the Syr and Amu Darya, which bring it glacier water from the Pamir Mountains.

Until the 1960s, it produced 50,000 tons of fish a year. But in the 1960s, the Soviet authorities began to divert water from the two rivers to produce cotton for uniforms and gunpowder, knowing the sea would die.

“When I got to Aralsk, the port was dry and the sea was more than 30 kilometers away,” Aladin recalled. When he reached it, he found that its salinity had doubled to 2 percent in less than two decades, possibly the fastest rise in history. So he took samples and measurements and decided he would make his life’s work the study of how the fauna adapted to the changes.

But back in St. Petersburg, his proposals were met with evasive replies. While the decision to sacrifice fish for cotton was not secret, the authorities discouraged any examination of its appalling consequences on the ecology and the life of the local population.

Philip Micklin, a professor of geography at Western Michigan University who would become the leading Western expert on the Aral, remembers scrutinizing the Soviet scientific literature for details in the early 1980s. “You’d find an occasional reference to the fact the sea level had fallen by so much, or the salinity had increased, but you never saw a whole article devoted to the desiccation,” he recalled during the expedition.

In Russia, Aladin was forced to study other subjects and to ask for his father, a naval physician, for money to fund his research on the Aral. At scientific conferences, he was sometimes allowed to read papers on his research, but not to publish them. “It was a form of samizdat,” he said, speaking of dissident self-publishing under communism.

All that changed with Mikhail Gorbachev’s Glasnost policy of openness. Aladin’s research was published and the consequences of the cotton-first policy on the health of the Kazakhs on the north shore and the Uzbeks on the south shore were widely described. The Academy of Sciences gave him his own research center, the Laboratory of Brackish Water Hydrobiology.

Sherpa to a Sea's Rebirth

Nikolai Aladin cared about the Aral before it was popular.

Nikolai Aladin was born in 1954 in Leningrad, now St. Petersburg. Since 1989, he has been the head of the Laboratory of Brackish Water Hydrobiology at the Zoological Institute of the Russian Academy of Sciences in St. Petersburg. Aladin has been studying the Aral sea since 1978, when he first came to Aralsk for vacation after defending his doctoral thesis — to go diving. “When I got to Aralsk, the port was dry and the sea was more than 30 kilometers [18 miles] away,” recalled Aladin. When he reached the sea, he found that its salinity had doubled in less than two decades, possibly the fastest rise in history. So he took samples and measurements; he decided he would make his life work the study of how the fish and wildlife adapted to the changes. Since then, Aladin has become an expert for a variety of international environmental programs devoted to the Caspian and Aral Seas, including UNESCOand the United Nations. He has contributed to more than 200 articles in scientific publications and gone on 41 expeditions to the Aral Sea.

But while Moscow was still studying ways to reverse the disaster, the Soviet Union dissolved and what was left of the Aral Sea was bisected by the Uzbek-Kazakh border. The Russian scientific authorities became reluctant to fund expeditions, in part in deference to nationalist sensibilities there and in part because they were strapped for cash.

Meanwhile, Western donors questioned why they should give money to Russians instead of to Western scientists or to Kazakhs and Uzbeks.

So officially, Aladin went back to studying the Caspian. His father passed away and he financed his Aral research by taking paying tourists on expeditions and trying to turn a profit, with mixed results.

In 1993, he encouraged a local Kazakh governor to build, with a handful of bulldozers and little expertise, a crude dike that kept the water from the Syr Darya in the northern part of the Aral. Salinity dropped and some fish returned, but the dike breached repeatedly.

The World Bank eventually funded the construction of a proper, 8-mile earthen dike and concrete sluice e_SEmD all work was done without consultations with Aladin. By 2005, the Bank had completed the dike, which allowed for the accumulation of water into the sea and the restoration of wetland ecosystems.

Six years later, the fish biomass in the Kazakh part of the sea jumped from 3,500 tons to 18,000 tons, said local fisheries director Zaualkhan Yermakhanov. Fishermen are hauling in 6,000 tons a year using crude nets. Villages in the area boast new houses, schools and satellite antennas while a fish-processing plant in Aralsk has created 41 jobs.

Today, the government of Kazakhstan, a net creditor to the world thanks to booming oil and minerals exports, is considering taking the rehabilitation of the Aral one step further. Two plans are being considered. In the first, the Kokaral dike would be raised so the sea would rise another 20 feet, expanding its surface from 2,125 to 3,125 square miles. The other plan would involve digging a canal to the north that would divert Syr Darya water to bring the sea back to Aralsk, returning the town to its role as a port.

Aladin, who continues to travel to the Aral, urges that both steps be taken, one after the other.

Where did the water go?

Until 1960: The Aral Sea is 26,000 square miles with a salinity of 10g/liter. It produces 50,000 tons of freshwater fish a year, and the fishery employs 60,000 people. Upstream, in the two rivers, there are 12 million acres under cultivation. Aralsk is a significant port. 1960: The Aral Sea belongs to the Soviet Union. The authorities in Moscow decide to expand irrigation for its cotton industry and turn the sea into a brine lake, calculating that the cotton is worth 100 times the fishery. 1987: The sea has contracted to a third of its previous size, leaving a cracked, salty desert. The irrigated surface has doubled into north Small Aral and south Great Aral. Salinity has tripled and the fishery has disappeared. The number of birds and animals decrease twofold over 30 years. 2011: The northern Aral, now 1,300 square miles, is revived with a dike, which was built with the help of the World Bank in 2005. It allowed salinity to drop and all two dozen fish species to return to the waters.