The SCO is deemed deserving of cooperation 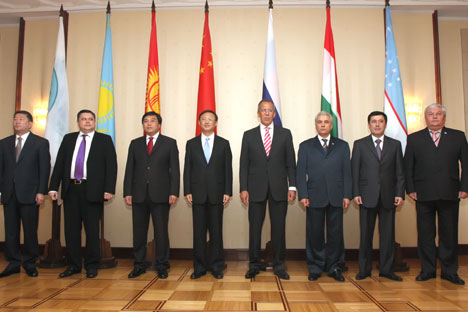 Turkey or US: Who is next in the rank? Source: ITAR-TASS

According to Kommersant’s sources, Ankara can count on receiving new status within the SCO as soon as 2012. The US, meanwhile, will most likely not be allowed to join the organization due to objections from a number of Central Asian countries.

Several diplomatic sources from the SCO member states have informed Kommersant that Turkey and the US have begun moving towards the status of dialogue partner with the SCO. According to Kommersant’s interlocutors, Ankara has made further progress by already having submitted an official application to the SCO secretariat in Beijing. And the US, say diplomats, has just begun holding informal consultations and gauging the opinions of the organization’s member states.

In the ten years since creation of the SCO (in addition to Russia, its members include China, Kazakhstan, Kyrgyzstan, Tajikistan, and Uzbekistan), Moscow has been actively seeking the organization’s recognition at international level. To a great extent it was due to the fact that during Vladimir Putin’s presidency the RF was trying to use the SCO as a counterweight to the growing influence of the United States in Central Asia. The call for the US to finally determine the date of withdrawal of its troops from regional military bases was made at the 2005 summit in Astana by the SCO. In order to give more weight to these demands, Russia was trying to make sure that the authority of the SCO was comparable to that of alliances in which the tone is set by the United States – primarily NATO.

Since its creation the SCO has been able to form partnerships with other international structures such as the UN, the OSCE, as well as associations patronized by Russia, such as the CIS, the CSTO and the EurAsEC. Now, the circle of global players who recognize the SCO as a serious organization is expanding with Turkey, one of the leading powers in the Middle East and Central Asia, as well as the global superpower, United States. “Ankara and Washington’s interest proves that we were able to create a serious and influential organization in record time,” a source in Russia’s Foreign Ministry tells Kommersant.

The position of dialogue partner in the SCO was established in August, 2008. According to the document, “the status of partner is granted to a country or organization that shares the goals and principles of the SCO and wants to establish equal, mutually-beneficial partnership with the organization”. Meanwhile, the status of dialogue partner is lower than the status of observer. Partners are able to participate only in selected SCO events. Moreover, they do not have access to the organization’s unpublished documents (but they can obtain them upon request, given there are no restrictions on their distribution).

Kommersant’s sources say that Turkey filed an official application for the partnership status in April. “Due to their influence in global politics and their economic power, as well as their joint struggle against various threats and economic partnership, the RF and the PRC were able to make the SCO an effective structure. Considering that Mongolia, India, Pakistan, and Iran have observer status in the organization, and Sri Lanka and Belarus were granted the status of dialogue partners, the SCO has become one of the largest organizations in Eurasia,” said a Turkish diplomatic source explaining Ankara’s motivation to Kommersant. “The relations we want to develop with this organization will reinforce the effective multilateral nature of our foreign policy and provide an opportunity to observe the ongoing events in the SCO and to familiarize members of the organization with our views.”

A source in the State Department has a similar explanation of the US interest in the SCO: “We have underestimated the potential of this structure. Surprisingly, in 10 years Moscow and Beijing were able to create an organization with a coherent vision and growing influence. Of course, it’s not NATO, as the values of the SCO member states are entirely different, and yet it is an interesting format with potential for growth. We would like to know more about the work of the organization.” According to Kommersant’s sources, the US has not yet submitted an official application for the status of dialogue partner, but has already clearly indicated its interest in cooperating with the SCO.

The director of Russia and Eurasia Programs at the Center for American Progress in Washington, Samuel Charap, believes that the US decision is long overdue. Back in 2009, Charap presented a report in the White House, advising the US to get closer to the SCO. “Partnership with this organization will have a positive effect on US relations with Russia, in addition to providing the obvious practical benefits of strengthening security in Afghanistan (which borders SCO members: China, Tajikistan, and Uzbekistan) and the entire Central Asian region. Moreover, this will open an additional diplomatic channel with China, one of the most influential members of the SCO, as well as Iran, which holds observer status in the organization,” Samuel Charap explained to Kommersant. “Moreover, it will be proof of the fact that the US is ready to join an organization where Moscow has a stronger influence than Washington. This will invalidate the arguments of those in Russia who consider the regional policy a ‘zero sum game’, in which US victory automatically always means Russia’s defeat.”

However, representatives of Russia’s Foreign Ministry doubt that Washington would decide to get closer to the SCO if it was dominated solely by Moscow. “There are two central forces in the SCO – Russia and China. The US would hardly support an organization in which Russia alone holds a dominant position as this does not benefit the US,” a source in Russia’s Foreign Ministry told Kommersant.

Meanwhile, Washington’s application, if ever officially submitted, may face problems. According to Kommersant’s source from the foreign ministry of one of the SCO member states, the situation is clear when it comes to Turkey: “No one has any objections regarding Turkey’s application. Members were generally ready to approve it at the SCO summit in Astana in July, but were unable to address all of the procedural issues on time. It will most likely be approved at the next summit”. With the US, says Kommersant’s interlocutor, things are more complicated: “Russia and even China are ready to give the US partnership status. Their logic is that the US will, either way, not learn any secrets, but this will raise the organization’s prestige. But some countries in Central Asia, particularly Uzbekistan, are categorically opposed to the idea. The reason is that by showing an interest in cooperating with the SCO the US is proposing a dialogue on human rights, and for Central Asian states, Washington, is not the most desirable interlocutor to have when it comes to this subject.”

Due to the objections of certain SCO members, it is possible that the US will not reach the stage of submitting an official application, says Kommersant’s interlocutor. “In the SCO, decisions are made on a consensus basis, and it turns out that we are unable to accept the US as our partner. For Washington, this situation would be somewhat humiliating. And for the SCO, which advocates the principle of openness, declining the application would be not be easy. So, both sides will probably try to spare themselves the embarrassment."