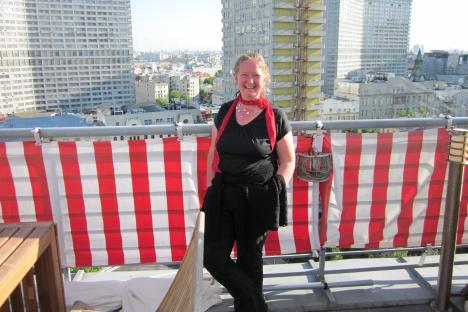 Phoebe Taplin, author of "Moscow Walks" during one of her numerous Moscow walks

Moscow is, feet-down, Phoebe Taplin’s favorite city to walk in. An RBTH contributor who has reported from Moscow and London, Taplin is writing a series of four books on the subject. The first "Autumn" volume is out now; the series of guidebooks is called, simply, “Moscow Walks,” and is inspired by and based on her famously popular (within expatriate circles) column in The Moscow News.

Despite the trappings of the guidebook format, the spirit of Taplin’s walks is more Henry David Thoreaux than it is Lonely Planet, and her almost mystical sense of place comes through.

Guidebooks can be precious and condescending and well, a snore. But during her years in Moscow, Taplin became known as the Pied Piper of Moscow’s expat community, expanding upon her base of trailing spouses and diplomats in Berlin. The walks in her books are much better practiced than most; she has clocked more than 5,000 miles herself.

While Taplin walks are well slogged, they also offer adventure, as Moscow never stands still. The place is in a constant state of reinvention, with buildings coming up and forests coming down. The contrasts of Moscow's environs can be seen in the chapter, “Go with the Flow.”

Taplin writes: “The longish hike along a lovely stretch of the Moskva River and through the woods at Fili passes the Gorbushka electronics market and two contrasting churches. The 19th century Nativity of the Virgin stands high on a wooded cliff above the river while the fabulous baroque Intercession is hemmed in by tower blocks."

Wait, electronics market? Tower blocks? And the next sentence, “Skirting around the right-hand side of the Sedmoi Kontinent supermarket, walk away from the main road…” And on it goes, Taplin’s eccentric and singular tour of the city.

Readers, especially those new to Russia, should be prepared for their own mishaps and mistakes when following "Moscow Walks." The author herself has had plenty of amusing adventures, from being propositioned by a drunken Cossack at a Gzhel railway station to sinking knee-deep in the marshes of Izmailovo Park. “One guy had to take off his trainers to wade barefoot through the mud. I kept trying to explain to him that it wasn’t always like this; sometimes it was even quite civilized, but he never came back,” Taplin recalled in an interview. “Another time we had to run away from a pack of wild dogs near a fancy dacha compound. We didn’t even stop when we got to the river, but ran right through it. It was all part of the adventure.”

On a day trip to Rostov Veliky, north of Moscow, a group left at dawn on the express train and “arrived on a brilliant white, blue and gold winter’s day,” Taplin said.  “One friend – who had just turned sixty – was so excited that she tobogganed down a snowy hill on her coat. We could already see the fairy tale towers of our destination (St Jacob’s monastery) ahead and then – as we approached – the whitewashed walls of the whole ensemble turned pink in the evening light.”

Most of these memories don’t make for guidebook reading, which is why Taplin will probably one day have to write a memoir. The only thing that’s missing from this book is a bit of magic realism, and a pop-out Taplin to take you where you want to go. “Moscow Walks” is the next best thing.

"Moscow Walks" can be purchased online through Amazon U.K. or The Moscow News.