Housing as an Investment 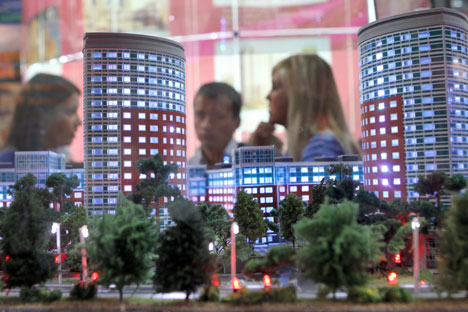 Mortgage lending continues its resurgence in Russia following the collapse of the housing market in 2009. During the first three quarters of 2011, Russians took out loans for housing totaling 396.6 billion rubles ($13 billion), which is double the figure of a year ago, according to data from the state agency for housing mortgage lending (AIZhK). The agency’s forecasts estimate that by the end of the year, mortgage loans will total 640 billion rubles ($21 billion), which is close to pre-crisis levels.

Mortgage lending continues its resurgence in Russia following the collapse of the housing market in 2009.  During the first three quarters of 2011, Russians took out loans for housing totaling 396.6 billion rubles ($13 billion), which is double the figure of a year ago, according to data from the state agency for housing mortgage lending (AIZhK).

According to data from Penny Lane Realty, the market’s recovery is being aided by a reduction on mortgage interest rates, now at an historic minimum of 11.9 percent for loans denominated in rubles and 9.6 percent for those in U.S. dollars.

According to data from AIZhK, the increase is evident in all regions of the country, including the Far East and Siberia, although Muscovites are borrowing the most; AIZhK shows that banks in Moscow have already loaned out 80 billion rubles ($2.6 billion) for the purchase of housing. Data from the Federal Service for State Registration, Cadastral Records and Cartography (Rosreestr), most buyers in Moscow are purchasing pre-existing homes. This is the least risky segment of the market, as the new owner immediately receives documents confirming his ownership of the property and can move into the apartment right away.

By taking a mortgage in foreign currency, Ksenia has a lower monthly payment, but she also takes a serious risk: Her salary is paid in rubles, and over the past three years, the ruble’s exchange rate against the dollar has declined by 30 percent. “I took the mortgage loan in dollars, because I fit the bank’s restrictions that I would be paying less than half my officially confirmed income per month. For taking a loan in rubles I would already exceed this limit,” she said.

Surveys show that in general, Russians don’t consider mortgages to be a good deal because of the overpayment of the interest. Those who do take mortgages try to pay them off ahead of time.

Ksenia doesn’t think she will be able to pay back the loan in advance, but she can easily afford the monthly payment. “I used to pay 25,000 rubles ($818) a month in rent. Now my housing expenses have grown a little, but on the other hand they are part of my apartment’s cost.”

Taking a risk on new construction

Although mortgages are increasing in Russia, they are not the most popular way to buy housing. According to AIZhK, this year, mortgages make up only 17.4 percent of all housing transactions. Most Russians choose instead to participating in equity construction projects or by co-investing in a building under construction.

The system works like this: A construction company planning a new apartment complex will announce the beginning of construction and sell apartments in a building that doesn’t yet exist, then the building is constructed from the amount of money collected. It is beneficial for both the buyers and the developers, since the price of apartments at this stage ranges from 30-60 percent less than the cost of a finished apartment, and the developers do not have to take out a loan to pay for the construction, which can range from 10-13 percent per year. In addition, the buyer doesn’t have to show any documents to prove his income, and he is allowed to pay the majority of the apartment cost on an installment plan, sometimes even interest-free, although this arrangement is valid only until the building is finished. And if a buyer finds that he cannot pay off the entire amount or changes his mind about the deal, he can resell his apartment under construction to someone else.

The Levashovs bought their apartment this way. In 2008, they agreed to buy a 400 sq. ft. two-room apartment on the outskirts of Moscow for 3.05 million rubles ($98,200). “It was the crisis time, banks ceased giving mortgage loans, and the Azbuka Zhilya Company offered this option to us,” said Tatyana Levashova, 54. According to the terms of the agreement, the couple paid 60 percent of the housing cost at once and then paid the rest of it by installments in the amount of 72,000 rubles ($2,350) per month over 18 months. As a result, their interest payments raised the price of the apartment only 7 percent over the initial cost. Taking into account the rise in prices for new housing in Moscow Region, which averages 10 percent per year, the Levashovs have already made a profit.

This kind of deal appeals to Russians who don’t have a lot of savings and don’t plan to live in the same apartment forever. Its primary drawback is the fact that the construction is not guaranteed, and the developer may run out of funds to finish the building, or may just be running a scam. In addition, a buyer can only officially register ownership of a new apartment after the new building itself is registered with the state – which takes on average two years after the construction is completed.

As part of his plan to reduce traffic and expand the capital to the southwest, Moscow Mayor Sergei Sobyanin has issued orders limiting mass construction of residential housing to a limited number of districts where convenient roads either exist or can be constructed. The mayor promised his plan will also have a positive impact on the transparency of housing purchases.

In Russia, as in many other places, private investors are riding out the financial crisis in real estate.  In Moscow, the most profitable investments are in large, economy-class buildings in the Moscow suburbs, according to Grigory Kulikov, chairman of the board of directors at Miel Holding. A representative of the Morton Company, which is constructing almost 5 million square feet of housing in the Moscow Region, said that there are private investors who buy 10-15 apartments at once when a building’s foundation is being poured.

Vladimir Yakhontov, Managing Director of Miel, agrees that the most profitable option for real estate investors is to put money into this “new Moscow:” “Now all state investments and investments of entrepreneurs will be spent on the development of this region, which means that the cost of property there will increase at a faster pace than anywhere else. For now, there is no master plan for the territory’s development. But as soon as it appears and programs begin to be implemented, prices will start growing regardless of the worldwide situation.”