A viewfinder on the politics of change 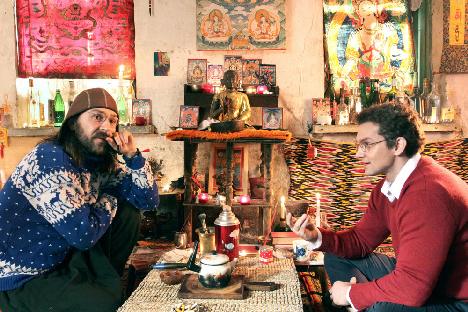 This year’s Russian Film Festival is highlighted by stories that reflect the social and political consequences of three turbulent decades.

The latest generation of contemporary Russian films continues to look back on the realities of the country’s near past. Some of the most outstanding new releases will be a big draw at the Fifth Russian Film Festival in London, which starts on November 4. Below we preview three of the best: Innocent Saturday , a prize-winner at the Brussels Film Festival, which captures Soviet Russia in the Eighties; the long awaited Generation P , which is based in the turbulent Nineties; and Elena , a critical view of the replete 2000s, which won a special prize at the Cannes Film Festival.

The tragic accident at the Chernobyl nuclear power station 25 years ago is central to this film. The action takes place in the Ukrainian city of Pripyat, starting on April 26, 1986 – the day the explosions occurred.

The film’s plot is by no means “Hollywood” in style: Valera, a young member of Komsomol and a typical administrative careerist, finds himself unwittingly privy to a state secret: he discovers the truth about the Chernobyl incident at the very moment when the authorities start trying to cover up what’s happened. At first he tries to flee, taking his girlfriend with him, and then, yielding to a whirlwind of events that don’t seem comparable in significance with the accident, he finds himself at the epicentre of the tragedy.

Innocent Saturday is particularly notable for its strong performances, unusual camera work and a confident directorial touch. Mindadze presents a vivid reflection of everyday Soviet life at the time, and attempts to capture the atmosphere in which a sense of the forthcoming collapse of the system was already in the air.

“Strictly speaking, the film is not about Chernobyl,” Mindadze tells Rossiyskaya Gazeta . “For me, the accident is a basis for looking at how people behave. Instead of running away, a person in an extreme situation stays where he is for some reason, and the details of life – which he paid no attention to before – suddenly become vivid and hold him back.”

The title of the film is a play on the phrase “Pepsi generation” – the young people who lived through the collapse of the Soviet Union and the advent of capitalism.

Based on Viktor Pelevin’s sensational novel Generation P – which became an instant cult hit when published in 1999 – the film remains very true to the book. The main hero, Vavilen Tatarsky, is one of the first people in post-Soviet Russia to take up the profession of copywriting. He writes snappy advertising slogans, deals with crooked advertisers and gets caught up in politics – all the while hovering between the real world and that of his  narcotic fantasies.

Victor Ginzburg has done well to capture Pelevin’s writing style, which Alexander Genis describes as bringing to life “the places where different realities collide. Where they meet, vivid artistic effects emerge – one picture of the world superimposed on the other creates a third picture, different from the first two.” Scenes shot in the style of an advert are alternated with television news footage from the Nineties: we see Yeltsin conducting an orchestra, and tanks firing on the White House.

The film benefits from the involvement of some of Russia’s leading actors, as well as high-profile media figures – an achievement for Ginzburg, who was not particularly well known before the film. Although he has spent most of his life in Los Angeles, he says this has not alienated him from the realities of his home country. “I feel American in Russia, and Russian in America,” he admitted in an interview with the BBC’s Russian Service. “In the film this conflict of values – the old Soviet values and the new western ones – was something I felt close to and could understand.”

This story, set post-2000, illustrates the choices open to ordinary people in a time when moral principles have become devalued.

Helmed by one of Russia’s most successful directors, Elen a won a special prize at the Cannes Film Festival and has been warmly received by the general public – a rarity for auteur cinema.

Elena and Vladimir’s marriage, although a classic mismatch, works for both of them. He is a rich, ageing businessman who suffers ill health; she is a middle-aged woman of humble origins, his former nurse. Elena is caught between the lives of her husband and her son, an idler who does nothing to support his family and leeches the money his mother takes from her husband. Two worlds, two contrasting figures from modern Russian society, and Elena becomes the bridge between them: on one side a disagreeable but successful individual, and on the other a scrounging dependant.

“I am sure that this story  will be understood not only in Russia but also in other societies,” said Zvyagintsev in an inteview with Russian  Reporter . “Of course, the script we wrote stems from the experience of living in our country, whereby the  paternalistic Russian state has engendered scrounging with its distorted understanding of consumption, and the attitude that causes you not to work but instead to do nothing.”