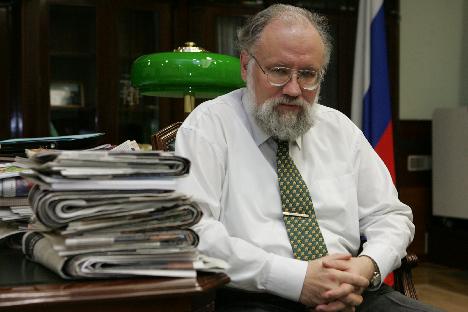 The need for voters to come to the polls may be the one subject on which the state election commission and opposition leaders agree.

The current Russian electoral system began to take shape in 1993 when the country adopted a constitution that vested the president with sweeping powers at the expense of the parliament. Since then, election laws have been repeatedly amended – they have been revised roughly 150 times since 2002 – but the fundamentals of the system remain the same. As a result, the government and the opposition, along with human rights activists, differ fundamentally in their evaluation of Russia’s electoral system.

The Central Election Commission describes Russia's electoral legislation as “one of the best in the world,” placing special emphasis on its sophisticated voting technologies, including an automated vote counting system, an electronic voter database, and video cameras installed at polling stations. This combination of measures, according to Commission head Vladimir Churov, rules out the possibility of vote tampering.

There is, however, a different view. “On the whole, the current condition of the institution of elections in Russia complies neither with international obligations, nor even with national legislation,” Russian human rights activists wrote in a statement to the Parliamentary Assembly of the Council of Europe (PACE). The statement was signed by Ludmila Alexeeva, chair of the Moscow Helsinki Group; Oleg Orlov, chair of the board of the Memorial Human Rights Center; Lev Ponomarev, leader of the For Human Rights movement; and human rights activist Sergei Kovalev, among others.

The essence of the human rights activists’ claims is that for the past decade, election laws have only been modified by the United Russia party – which they believe has been making amendments for its own benefit. For instance, direct gubernatorial elections were eliminated, parties were prohibited from forming election blocs, the “against all” ballot option and the minimum turnout requirement were both abolished, while minimum party membership requirements were hiked from 10,000 to 45,000 people, in a country with a total population of 142 million. In comparison, the United States also imposes a minimum membership requirement on political parties in order to register for elections, but with its population of 313 million, the requirement ranges from a minimum requirement of 25,000 in Illinois to just 3,000 in Wisconsin. According to German laws, parties do not need to be registered with any government body or meet any minimum membership requirements to form.

Proponents of Russia’s restrictive measures point to the fact that some of them were enacted to match the standards of European associations to which Russia belongs, including OSCE and PACE, and that elections themselves have become more meaningful to voters. In addition, the State Duma has overcome the legislative chaos and extreme polarity that made it difficult to pass any bills. Supporters also point to opinion polls showing that Russians overwhelmingly approve of the idea of having only three or four large political parties. Critics, however, have argued that the State Duma has degenerated into a body controlled by United Russia, and as a result eagerly endorses all decisions handed down by the Kremlin without any discussions with members of other parliamentary factions.

The Central Election Commission argues that the current party system in Europe, in which party representation in parliament is dependent on voter turnout, has taken centuries to develop, and its elaborate structure has adapted poorly to current realities – as evidenced by the failed attempt at election reform in Great Britain. In forming election laws, the Commission relies more on the legislation of the “new” democracies in Latin America, India, and Asia – where the democratic tradition of individualism is less engrained than in traditional Western democracies.

Election Commission head Churov says that the results of elections are far from predetermined. And, strange as it may seem, Churov’s views are shared by a considerable portion of the opposition: Opposition leaders believe that there are enough parties in Russia to represent a wide range of viewpoints and beliefs, an if Russians actually voted, they could shatter United Russia’s majority.

President Dmitry Medvedev, who recently agreed to lead United Russia’s parliamentary election list, does not think the current election legislation is perfect. He even agreed, among other things, to consider a restriction to prevent any one party from gaining a majority in the State Duma. At his initiative, the minimum share of votes for any party to win seats in the Parliament will also be reduced from 7 percent to 5 percent. Critics have decried the measures as cosmetic, while government supporters assert that such drawbacks and adjustments are typical of any “emerging democracy” – a stage at which, incidentally, Russia has remained for 20 years.