Grand hotel: the iconic Ukraina is reborn as an ‘oasis of elegant luxury’ 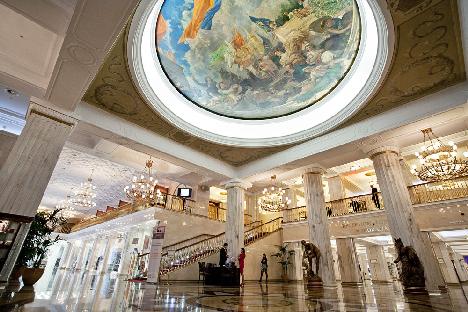 The Hotel Ukraina, once the largest hotel in Europe, has been restored to its former glory – with a little modern style and comfort added.

The Hotel Ukraina (or the Radisson Royal Hotel as it is now called) has always been distinct from the other Seven Sisters. Unlike the closed ministries and residential buildings, this hotel allows anyone to stroll in and admire its stunning panoramas – which is what legendary cosmonaut Yuri Gagarin did back in 1961.

The Ukraina is also one of the oldest and most celebrated of the Seven Sisters. When it opened in 1957, it was the largest hotel not only in the USSR, but in all of Europe; to this day it is Moscow’s tallest hotel. The observation deck that once occupied the 29th floor has gone, but the views can still be enjoyed from the fashionable restaurants at the top.

The spectacle begins in the main lobby, where you get a bird’s-eye view of Moscow – from the golden domes of the Kremlin churches to the boats on the Moscow River. But there are no glass towers on the horizon, as this is a view of Moscow in 1977, immortalised at the time in a huge diorama. Measuring 16m x 9.5m x 6m (52ft x 31ft x 20ft), the piece was created for a national exhibition in New York City. At the time, US astronaut Neil Armstrong wanted to buy it, but in those days Soviet Moscow was not for sale. In 2007, it was bought at auction by the Ukraina’s new owners, the Rezidor Hotel Group.

After a major, three-year renovation, the hotel has been transformed into an oasis of elegant luxury. Its layout and interiors have been changed – it now has all the elements of a modern five-star hotel, such as boutiques selling luxury brands – but the old trimmings, made of natural and traditional materials , such as marble, Karelian birch and onyx, still remain.

The spirit of the Stalinist era is unobtrusive yet palpable everywhere: in the lobby’s massive crystal chandeliers and the expensive curtains draping the tall windows; in the green glass lampshades and the hush of the library, where volumes of Marx and Engels are housed.

“Our Japanese guests are  especially thrilled by this,” the receptionist remarks. “One tourist even lay down on the floor to get a better shot of it.”

Some 1,200 paintings by Soviet artists adorn the walls of the hotel, the most famous by Polenov and Deineka. “Many of our foreign guests ask to buy these paintings,” says Natalia Kalinina, who has worked with the Ukraina’s management for more than 30 years. “But they are the pride of the hotel and are not for sale.

“One day, in 1991, we received a letter from England saying: ‘I stayed at your hotel in March 1988 and remember a beautiful painting showing children playing in the snow… I would very much like to buy it from you. If you cannot sell it to me, then I would be grateful for a photograph of it.’”

Natalia had the painting photographed and sent it to the English admirer. In reply, she received a letter of thanks and a family portrait taken in front of a canvas – a copy of the painting.

Part of the hotel’s wings are given over to private residential apartments, occupying 11 storeys. Like those of the other Seven Sisters residential buildings, these apartments have housed plenty of Russian celebrities: singers, writers, actors and scientists. In the late Fifties, an ice rink was installed in the inner courtyard of the hotel , where the future Olympic ice-skating champion Ludmila Pakhomova practised.

The Ukraina’s Olympic connection lives on: the hotel now boasts a 50m swimming pool and a fitness centre where coaching in different sports is given by former Olympic champions.