Vologda's Cathedral of Divine Wisdom: The last of its kind 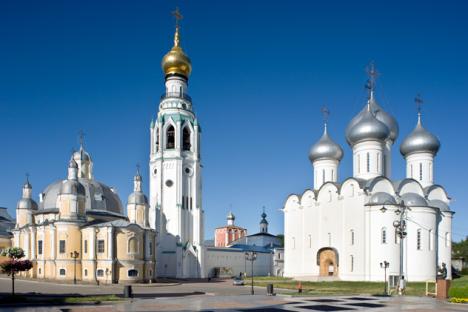 The great cathedral of St. Sophia in Vologda, modeled after the Kremlin churches, was the jewel of Ivan the Terrible, but its frescoes depict a world view that came to an end not long after its completion.

By the mid-16th century, the city of Vologda had become the major trading and administrative center in northern Russia. It served as the primary distribution point for Moscow's rapidly increasing trade with England and Holland by way of the Dvina River and the river's new port located at the site of the Monastery of the Archangel Michael, a settlement subsequently known as Arkhangelsk.

Vologda was still built entirely of wood until Ivan IV (the Terrible) decided in 1565 to include the town in his private domain, his oprichnina. With this decision, he initiated construction of a masonry fortress, or kremlin, intended to serve as his northern residence. After 1571 this enterprise was abandoned, and the walls were eventually dismantled. But one important monument remained:  the Cathedral of Saint Sophia.

Vologda's cathedral is an excellent example of 16-century church architecture based on Aristotle Fioravanti's Dormition Cathedral (1475-1479) in the Moscow Kremlin, Russia's Holy of Holies. The Sophia Cathedral was intended to serve as the seat of the Vologda bishopric, enlarged in 1571. For various political reasons, however, the cathedral was not consecrated until 1588, four years after Ivan's death.

Fortunately, the Saint Sophia Cathedral has largely preserved its 16th-century form. Its whitewashed brick walls are segmented and lead to a roofline of semicircular gables, or zakomary, restored after World War II. The onion domes, which provide a striking culmination to the structure, were rebuilt in their present form during the 17th century. The elaborate iron crosses above the cupolas were added in 1687.

The monumental simplicity of the exterior is imposing, but the St. Sophia Cathedral reveals its true grandeur on the interior, which contains some of the best-preserved examples of 17-century frescoes. In 1686, the archbishop of Vologda, Gavriil, commissioned the painting of the enormous interior space by a group of some 30 artists from the city of Yaroslavl. Among them were experienced masters such as Dmitrii Grigorev Plekhanov, who had supervised the painting of the Dormition Cathedral at the Trinity-St. Sergius Monastery near Moscow in 1684. In an era when the Western view of art as an occupation was entering Russia, the artists painted an elaborate inscription on the lower part of the interior with a list of their names and a proclamation on the beginning and end of their work, from July 1686 to summer 1688.

The frescoes include symbols of the faith, major church festivals, scenes from the life of the Virgin Mary, as well as the life and parables of Christ. In the main cupola, Christ Ruler of All is depicted, while the four smaller cupolas portray John the Baptist; the Trinity (Father, Son and Holy Ghost); Mary and the Christ Child; and Christ Emanuel. Martyred warriors and Russian princes are on the great piers that support the ceiling vaults. Elsewhere are apostles, Old Testament prophets and patriarchs, the four Evangelists. In contrast to earlier medieval art, these wall paintings demonstrate a greater attention to background detail – a process attributed in part to 17th-century engravings in the so-called Piscator Bible, published in Amsterdam, known in Russia and used by artists from Yaroslavl. The apse, which contains the altar, is also covered with frescoes, although lay worshipers are not generally permitted in this space. It is not even visible from the center of the cathedral because of the iconostasis, the wooden screen containing icons that separate the nave from the altar.

Indeed, the Sophia Cathedral's painterly art is not limited to its frescoes. The east side of the interior contains an icon screen that is among the largest in the Russian north, over 70 feet in height. The frame of this towering structure was completed in 1737 by Arsenii Borshchevskii, a local monk of Polish extraction, to replace a late 17th-century iconostasis badly damaged by fire in 1724. With the exception of the Local Row of ancient icons at the bottom, the new icons were completed a year later by Maksim Kalinin Iskritskii – also of Polish descent. Painted in oil on pine boards, these icons show a mannered Western style favored by Russia's church hierarchs and by the Russian court.

The Sophia Cathedral frescoes rank among the highest examples of 17-century Russian art. The most spectacular display is on the west wall, which contains a vivid "Last Judgment," with Christ enthroned and Satan seated in hell at the bottom right. In the middle are souls being weighed; the righteous are being separated from the condemned sinners. Among the latter are elegantly dressed foreigners, infidels who threaten Orthodoxy – a view of the world formed during Russia's long isolation and its incessant border wars. Especially notable is a Protestant man in a tall-crowned hat known as a capotain (or in America, the Pilgrim's Hat), worn in northwestern Europe in the 17th century.

The revealing irony here is that in the early 1690s, shortly after these magnificent frescoes were painted, the young Tsar Peter Alekseevich (later Peter the Great) would eagerly keep company with Protestant Europeans in Moscow's "German Quarter," created by the Orthodox Church in the mid-17th century to restrict foreign influence. During the formative 1690s, Peter would come to see the advanced technology and well-governed states of Protestant Europe as a model for Russia. Thus the world view vividly portrayed in Vologda's  Sophia Cathedral was on a collision course with a modern, secular view of Russia's place in the world, a vision so forcefully represented by Tsar Peter. One could indeed argue that the fallout from that collision lingers to this day.