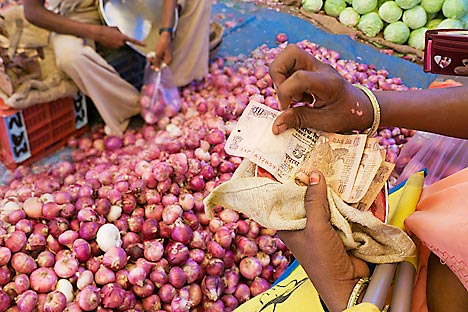 India will more than double their wealth over the next five years. Source: Alamy/Legion-Media

Material wealth growth of Asian and Pacific Region countries’ citizens can create new consumer and investment trends. Here’s a closer look at the wealth growth tendencies for the next 5 years.

Crisis or no crisis, people across the world are getting rich at an amazing pace. Global wealth has increased by 14 per cent – to $231 trillion – over the past year and a half. And it is set to increase by another one and a half times over the next five years, causing “unprecedented economic change.”

This is all according to a study conducted by Credit Suisse that analysed the distribution of wealth among 4.5 billion adults in more than 200 countries.  Experts said the good news is that, in five years’ time, the average wealth of every adult person will increase by 40 per cent to $70,700.

It was a surprise for many to learn that the main generator of global wealth was not the United States, but the Asia-Pacific Region. Residents of this region account for a 54 per cent increase in global wealth, which is defined as finance and real estate assets minus individual debt.

From January 2010 to June 2011, material wealth increased by 14 percent to $231 trillion. A further breakdown showed that the personal wealth of adults in the Asia-Pacific region jumped by 23 percent to $75 trillion, while the citizens of North America grew richer by 9.2 percent, and Europeans by just 4.8 percent.

According to the Credit Suisse forecast, the foreseeable future will see people accumulating wealth at an average rate of 8.4 percent per year. Global wealth will increase by 50 per cent – to $345 trillion – no later than 2016.  It is China that promises to be the main engine for this growth.

Household wealth in China will increase by more than 90 per cent to $39 trillion, and China will thus become the second richest nation in the world, surpassing Japan, whose citizens will be able to save $31 trillion by 2016. The most affluent nation in five years will still be the United States with $81 trillion.

According to estimates by Credit Suisse, citizens of India and Brazil will more than double their wealth over the next five years, to $8.9 trillion and $9.2 trillion respectively.

Wealth in India has tripled over the past ten years. Today, every citizen of India on average boasts personal finances and property worth $5,500. However, the average level of wealth in India is still many times below the world average ($51,000 per person) and nearly one hundred times lower than in Switzerland, the most affluent country in the world, where every adult citizen on average owns capital of $540,000.

Nevertheless, the rapidly growing wealth of citizens in countries such as India is capable of forming new consumer and investment trends. According to experts at Credit Suisse, the faster growth in the personal wealth of Asian citizens, coupled with the significantly smaller debt burden compared to Europeans, creates opportunities for fruitful and mutually beneficial cooperation in addressing the crisis in the Eurozone. Today, the average debt of an adult European citizen is $25,500 while, in the Asia-Pacific region, the figure is $9,200. And they have an ever-improving capacity to lend money to Europeans.

But the Credit Suisse report and optimistic forecasts will do little to bring peace to the markets. The bank’s research confirms that 29.7 million of the most affluent citizens – those who possess capital in excess of $1 million – make up less than one percent of the population. Yet they control 38.5 percent of global wealth. Last week, social inequality became one of the main reasons for the protests that erupted in hundreds of cities around the world.

India, however, is somewhat different. Despite the fact that a large number of ultra-rich citizens have been appearing in this country (there were 34,000 new millionaires in 2011 alone), most of them are considered residents of other countries.