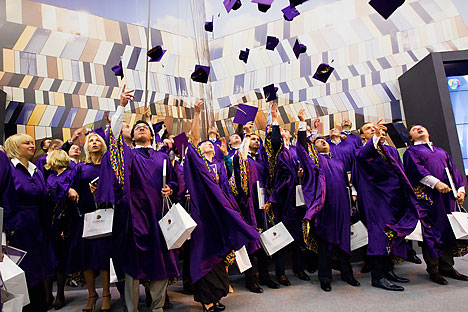 The Skolkovo business school turns five this year. What has it achieved so far?

As recently as five years ago, the suburban Moscow home of the Skolkovo business school was just an ordinary field overgrown with dandelions and daisies. Today, the only thing reminiscent of a daisy is a super-modern business center viewed from above. Designed by British architect David Adjaye, the glass and concrete campus of the school is divided into oddly shaped petals called clusters. The building abuts an elegant park.

And yet despite the contribution of the celebrity architect, the campus looks more like an ordinary shopping mall. The courtyard is full of gadget-toting students strolling about lazily. They look like the affluent young people Russian comics and satirists have started to mock as "start-uppers " – educated men and women who hope to create the latest must-have hi-tech product.

But some students are already outdoing the stereotype. Irina Linnik is one. Sitting in Isaac Correa’s fashionable on-campus restaurant, her face is buried in her aluminum MacBook. But unlike many others, Linnik is not “liking” something on Facebook or retweeting funny cat posts – she is communicating with her business partners. Linnik invented the Life Button, a simple device designed to help people with elderly parents. “It’s no secret that the healthcare system in our country is far from perfect,” Linnik said. “Even if you get through to emergency services, there’s no guarantee an ambulance will arrive on time. I have an elderly grandmother myself, so it’s an important issue for me, too. I devised a special button that mounts on a cell phone or wrist strap.”

The sensor will work even if the person wearing it has fallen or is unconscious, thanks to a special motion detector. The signal is then transmitted to a call center where employees decipher it and look the client up in a database that includes their medical records, insurance information, allergies, and more. A call center employee then contacts the relatives who decide themselves whether to call a regular ambulance, a private one, or deal with the situation themselves. “Has the Skolkovo school helped me?” Linnik asked, hypothetically. “Yes, of course. When I studied at the Higher School of Economics, my professors hammered into me the idea that entrepreneurship is bad. It was only here that I realized that making money is not only cool but also interesting.”

Irina Prokhorova, Skolkovo’s Business Development Director, is of a similar opinion. “For a long time, our country’s traditional idea was that working hard, let alone making money, was somehow shameful. So our mission is to restore people’s respect for honest labor. A shot in the arm of Protestant work ethic, if you will.”

That shot doesn’t come cheap: The 18-month-long MBA course at Skolkovo costs around $80,000 – on a par with established giants like France's INSEAD, or the London Business School. But it’s worth it. The curriculum is very hands-on. Students travel to implement projects in Russian regions and carry out ideas in the BRICS countries, and upon graduation, there is the possibility of an “angel investor”– something the school’s fans are invariably excited about. Students can select a mentor from among Russian businesspeople, including those who sit on the Coordination Committee, such as Ruben Vardanian, CEO of investment bank Troika Dialog, and Leonid Melamed, general director of the Alemar Investment Group. If the guru likes a student’s idea, it will be implemented quickly and its creator will be poised for a bright future. This was for instance, the way that ideas on how to chemically convert soft wood into hard wood and how to reduce steel quality control costs and downtime have won approval. Here is the fundamental difference between start-ups “made in Skolkovo” and those made elsewhere: Researchers here don’t get cash without a solid business plan, the investment procedure is strictly regulated, and major Russian corporations implement most inventions.

It's no secret that most serious Russian companies are stagnating. Their old-guard executives have exhausted their potential, while the new ones expect starting salaries disproportionate to their proven contribution. In order to maintain their firms’ prestige while getting what they want, a members of Russia’s business establishment created this system – in which those with real ideas pay for the opportunity to share them. And, as is the case in many big-name western institutions, the tuition at Skolkovo is not so much compensation for the school’s (admittedly large) expenses as it is a pass into a certain circle, which until recently was accessible only to those born into the right family or had substantially more than $80,000 in the bank.

To be fair, it’s not the MBA program that generates the bulk of the school’s profit, but the corporate training division. Clients for this service include TNK-BP, Gazprombank, Beeline, and Ernst & Young. Stephen Pierce, an analyst with the UK division of the accounting firm Deloitte, explains the firms' interest simply: “This popularity is understandable, given President Medvedev’s unofficial patronage of the school. Trends promoted by the powers that be are always in fashion, whether it’s new gadgets or business courses. But Russia will have a new president in the near future whose brutal image isn’t quite in line with Skolkovo’s proclaimed values.”

Business Development Director Irina Prokhorova begs to differ: “The country always needs thinking people who can generate profits. It wouldn’t be an exaggeration to say that we, to the extent of our modest abilities, are creating exactly that kind of generation. Judging by the interest expressed in our graduates not only by business but also by government agencies, the project will succeed regardless of instructions from the top.” It’s hard to argue with that: Vladimir Putin has repeatedly spoken out recently about the important role foreign investment plays in Russia’s future. And an incubator for startups is exactly what may attract it.