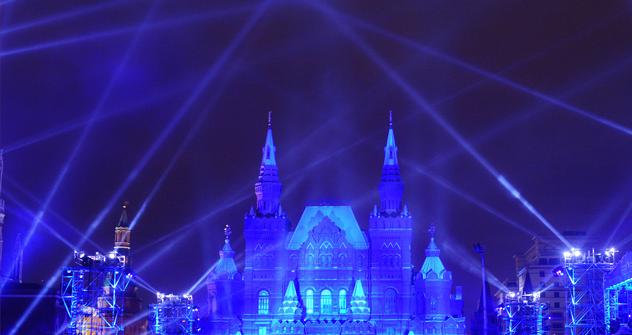 In presentation modeled after the Festival of Lights in Lyon, France, images flashed across the facades of major Moscow landmarks

Before pressing a symbolic launch button to inaugurate the Moscow International Circle of Light Festival, Moscow Mayor Sergei Sobyanin said that although it was hard to impress Muscovites with spectacles, the festival of light would literally be a bright spot in their lives.

“Artists from all over the world have prepared their best programs in order to show how beautiful and modern our city can look,” the mayor said. “This is important for us, because the city has embarked on a major program to improve street lighting. If citizens enjoy the light festival, it may become a tradition and could eventually become one of the city’s calling cards.”

The mayor’s words drew applause and shouts, which briefly drowned out the chimes of the Spassky Clock Tower. Then the first piano chords struck as spotlights on a multi-tiered stage in front of Lenin’s Tomb were switched on. The flash of lights flickered on the bodies of people in luminescent, skin-tight suits. Meanwhile, the darkening sky was lit with intersecting beams of light; sparkling light washed over the crenellated walls and towers of the Moscow Kremlin; and searchlights swept across the domes of St. Basil’s Cathedral, turning the State Historical Museum into a heap of sand and making geometric patterns on the façade of the GUM department store. All this was accompanied by music performed by composer Dmitry Malikov.

“After being invited to take part in the festival, I worked through the summer,” Malikov said.  “The result was a suite that, if you will, is my idea of what music should be heard in Red Square, a site where I had never worked before. Artists then created a light show based on my music.”

One of the festival’s organizers was Jerry Appelt, a world multimedia technology star who directed the opening of the Sydney Olympic Games, Eurovision 2011 in Germany as well as other major events.

The trickiest part was ‘cutting’ separate pieces for short video art projects. I wrote the music that was played at all the sites, ranging from rap to bell chimes, jazz improvisation and classical piano.

The Festival of Lights was born in the French city of Lyon 118 years ago when citizens placed candles in their windows and lanterns and lamps were lit all over the city. The festival was dedicated to the Virgin Mary who had saved the city from the plague. Today, the Festival of Lights is a worldwide tourist attraction that draws up to 3 million spectators.

Almost all of central Moscow’s famous sites served as screens for the festival, including, in addition to the historic buildings in Red Square, the Manege Central Exhibition Hall, the fountain in Manege Square, the Hotel Moskva and even the entrance to Gorky Park.

Two other sites were made available for competition program: One of the facades of Manege Hall was open to professional artists and budding designers through the Video Art contest, while Gorky Park’s Pushkin Embankment side was open to beginning designers as part of the Light Laboratory contest.

More than 360 multimedia and light installations were shown over three days. The Hotel Moskva, for example, which was bedecked with a garland of flowers that turned into a flock of birds, also briefly became a planet in an unknown galaxy, a chessboard and a rainbow.