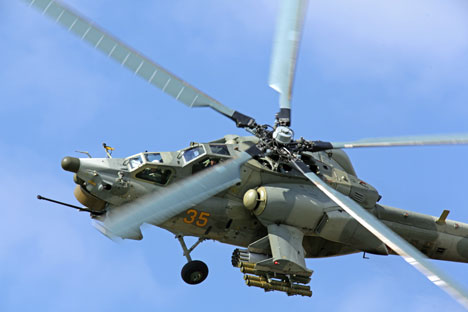 Mi-28N “Night Hunter” is not going to fly in Indian sky. Source: ITAR-TASS

Ruslan Pukhov, Director of Strategies and Technologies Analysis Centre, thinks that there are a number of reasons for losing the Indian tender, and the technical condition of the aircraft is not the main reason despite the Indian officials’ claims that their ground for choosing Apache aircrafts was the superiority of their technical specifications.

A representative for the Western Air Command in New Delhi stated that “both machines worked excellently, but the American helicopter had increased capabilities and displayed superior all-weather applications.”

True, there is room for improvement for Mi-28N “Night Hunters”, and some specifications should be upgraded. For example, according to Mr. Sukhov, the aircrafts’ operating system has to be improved, and also the radar allowing for the helicopters’ functioning at night and in bad weather doesn’t work properly.

But there may be other considerations that have influenced the decision of the Indian Ministry of Defence.

At the moment there are two more helicopter tenders in India for the purchase of multipurpose helicopters and super heavy helicopters, and Russian aircrafts take part in both of them – Ka-226 participates in the first tender, and Mi-26 in the second one respectively. And Ruslan Sukhov believes that, with both helicopters standing a high chance of winning the competitions, India simply can’t give all the three tenders to Russia.

The expert also claims that the current fascination with American aircrafts may have had an impact on the decision of Indian Ministry of Defence. Mr. Sukhov said that the advantages of American helicopters are widely known but there is little information on their shortcomings.

The history of comparisons between the Russian and American aircrafts in question dates back to 1995 when a group of Swedish experts tested the previous modification of Russian Mi-28N “Night Hunter” helicopters. According to the results of the exercise carried out by the Russian and Swedish pilots, Mi-28N outperforms its foreign rivals in flight performance, combat survivability, arms specifications and operating convenience are concerned.  However, they believe the Russian helicopter concedes to the American chopper as far as its shooting accuracy is concerned. However, this exercise took place more than a decade ago, and lately Indians have had more opportunities to observe the American helicopter in action.

Russian manufacturers have taken part in all three competitions, but it is not yet known who will win the other two. It is particularly important for Russia to win the contract for light helicopters, as it would allow them to penetrate a new market sector in India. Two candidates remain for this tender – the Eurocopter AS550 Fennec and the Kamov Ka-226T. The winner will be awarded a contract to replace the sizeable Indian Alouette II/III fleet which is mainly based in the mountainous northern areas of the country. The contract to deliver heavy transport helicopters will go to either the Russian Mi-26T2 or the American CH-47F Chinook.

The Indian Defence Ministry also plans to hold a number of future competitions for the procurement of helicopters, including one for the delivery of multipurpose helicopters for the country’s Navy. Experts estimate that India will deploy about 700 helicopters over the next ten years.