The Great Game is crowded 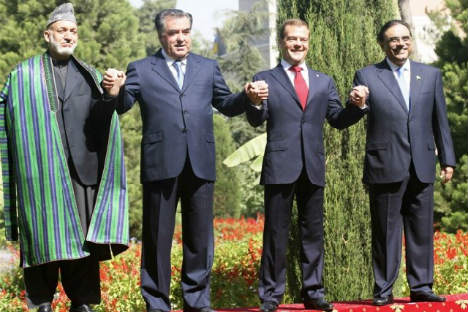 Central Asia and Tajikistan are in the centre of focus again.

When I was in Dushanbe, India’s defense minister just happened to be in the neighborhood, and popped in for a visit.

After the traditional bread and honey welcome ceremony at the airport, he discussed future uses of Ayni, a former Soviet airbase that India has quietly renovated to the tune of $70 million.

The Chinese, who recently built roads to Tajikistan from the east, told Dushanbe there is no hurry to pay off their $1 billion foreign debt to Beijing. After Tajikistan earlier this year signed over to China about 1 percent of its eastern mountains, Beijing dropped its claim to 20 percent of Tajik territory.

Within months, Tajik and Chinese soldiers were participating in a joint anti-terror drill in Western China. And, as Russian-language skills wither among a new generation of Tajiks, China has opened a Confucius Institute in Dushanbe to promote the study of Mandarin.

Not to be left behind, Russian leaders visited Dushanbe. At a joint press appearance with Tajik President Emomali Rahmon, President Dmitry Medvedev announced that the two countries had agreed to a 49-year renewal on leases for three bases that house Moscow’s 201st Motorized Division.

Not to be outdone, Iran’s president, Mahmoud Ahmadinejad, also flew into Dushanbe last month, inaugurated a new hydroelectric plant and signed accords for Iran to build a second one. Iran’s defense minister, Sherli Khairulloyev, said that if Tajikistan ever has any security problems, their Persian big brother is only a two-hour flight away.

Hmm, am I forgetting a player here? Of course, my country, the United States!

Marc Grossman, U.S. Special Representative to Afghanistan and Pakistan, was due to come to Dushanbe on Oct. 6 on a whistle-stop 12-nation tour. But, an “Afghan,” a massive dust storm blew in from the south, blanketing Dushanbe in dust, and shutting down the airport.

No worries. Grossman’s staff tore up his schedule, and found time for him fly into Dushanbe the following day. Since 2003, the U.S. has built border posts, barracks, bridges and now a special forces training center in Tajikistan.

Two weeks later, it was the turn of U. S. Secretary of State Hillary Clinton to make her pilgrimage to Dushanbe. She walked the new gardens with Rahmon, thanked him for his help on Afghanistan, and admired his big, new flagpole – the world’s biggest, it was American designed.

Get the big picture by now?

Central Asia’s Great Game is back in play.

Washington’s new timetable reduces current U.S. troop levels in Afghanistan by one-third by U.S. Election Day 2012, while its new, speeded up timetable for Iraq pledges to get all U.S. troops home by Christmas.

If there is one place where America’s Tea Party and Occupy Wall Street movements converge, it is this: Stop funneling billions of dollars into overseas wars.

In Moscow, it has finally dawned on the Kremlin that, for the last decade, American taxpayers footed the bill for what historically was Russia’s job: keeping Islamic holy war out of Central Asia.

Security Council chief Nikolai Patrushev recently said of Afghanistan’s government: “We think they are not ready.” When Communist and nationalist State Duma deputies threatened to vote against allowing U.S. military aid to move through Russia to Afghanistan, Deputy Foreign Minister Sergei Ryabkov lectured them: “What matters is preventing a re-Talibanization of Afghanistan.”

On Oct. 12, the UN Security Council voted to extend the mandate of the NATO-led forces in Afghanistan. Within hours, the Foreign Ministry in Moscow issued a statement praising the vote, but saying, essentially: “Slow down!”

Russia’s change of heart is too little, too late. American politicians, facing re-election one year from now, are probably not listening to Moscow.

James Brooke is the Moscow bureau chief for Voice of America.