United Russia platform has something for everyone 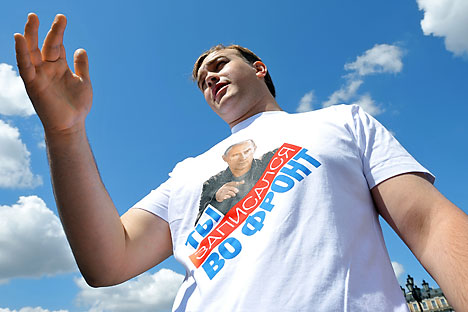 The program of the All-Russian Popular Front says that “the course of building a vertical power structure has largely been vindicated” and “the national state and political system should aim to develop in keeping with genuine rule by the people.” So

The United Russia party has unveiled its priorities for the next State Duma, written primarily by the members of the All-Russian Popular Front.

The People’s Initiatives Program, posted on the website of the United Russia party, “is not the result of work by Moscow’s experts and bureaucrats behind closed doors,” according to its authors. It has been drawn up by “authoritative experts, professionals from Russian regions and all citizens who care about the destiny of our Motherland” – in other words, members of the All-Russian Popular Front. The organization was created by United Russia ahead of the parliamentary elections as “a tool for developing direct democracy in the country.”

The substantive part of the document begins with a summary of the past decade, roughly a history of Russia since Boris Yeltsin left his post as president. The results are all positive: GDP, wages and pensions have grown, and the national debt and mortality rate have declined.

The Popular Front comes out in favor of strong federal power. Its ideologists argue that even in the most liberal countries, the state has had to step in to fight the recent economic crisis. They believe “the course of building a vertical power structure has largely been vindicated,” but think that “the national state and political system should aim to develop in keeping with genuine rule by the people.”

“There are many things Russian citizens are unhappy with,” the program drafters admit, including poverty, a poor business climate, corruption and the failure of officials to address people’s problems. Obviously, any Russian could expand this list. To make the citizens happy, “the fundamental objective of the state” must be met, which is to create conditions “for civilized competition of people, ideas, social initiatives, projects and programs in politics, economics and among the regions.” The approach appears to be liberal, but the proposed measures are hardly sufficient to meet the objectives set out in the next 100 pages of the document, especially the economic ones. But the state’s pledge to give everything to everyone is accompanied by a caveat: “A social welfare state and justice does not mean equality, but equal rights for all people.”

The document’s macro-economic section opens with familiar rhetoric about the need for modernization and diversification. The new element is that revenues from the sale of natural resources should be “used not only to enhance the ‘safety net’ but increasingly to finance the country’s movement forward.” This plank reflects the recent departure of former Finance Minister Alexei Kudrin, who firmly resisted “squandering” state reserves in this way.

Another “government priority” is stimulating private initiatives, partly by “removing all administrative barriers, and eradicating corruption and the negative aspects of Russian bureaucracy.” The program says nothing about how bureaucracy is supposed to fight itself.

Reflecting on the modernization of the political system, the authors of the document recall that “in our country, the interests of the state have often been put ahead of the interests of the individual” and warn that “this should not be repeated,” because “power is controlled by society.”

The document then details specific goals that would ensure a free and comfortable life for all Russian citizens. The citizens are used to hearing such promises, but what makes this list different is how detailed the proposals are. One such promise is “a revision of road markings.”

“The state must support and stimulate the export of manufactured goods and goods with high added value,” says the section dealing with foreign economic policy. The need for state support is justified by “tough competition” in world markets. Foreign partners also get their share of promises: “We will actively open up our economy to foreign companies that have innovations to offer and are ready to develop production in Russia.”

Business is urged to get more involved, “not only at the project development stage, but also in getting approval from regional and federal authorities.” The Popular Front proposes phasing out state economic control measures in favor of self-regulation. Its ideologists understand that “investors cannot be forced to come to Russia, they can only be drawn [here].”

The Program’s foreign policy section reaffirms Russia’s status as a leading world power and formulates a goal that is assumed to be in the national interest: “The full-blown utilization of opportunities offered by globalization, as well as the latest achievements of civilization and progress in consistently gearing them to the requirements of domestic development that meet the needs of the country and all its citizens.”

“For Russia, the priority of the European vector of development has to do with values and not geography,” the program says. “It…does not contradict, but complements and enriches versions of Eurasian development without limiting our freedom of action in any area of foreign policy.” But “the so-called West” is urged to “overcome the experience of its leadership, realizing that neither a forcible export of its own experience of political development, nor the creation of missile defense systems can force the world to ‘be happy’ or even build ‘an island’ of absolute security.”

Russia’s activities in Asia, Africa and Latin America in recent years are hailed as “the genuine breakthrough that the world needs.” The role of the Shanghai Cooperation Organization and BRICS and APEC projects are singled out.

The Program reaffirms the commitment to spending 20 trillion rubles ($663 billion) to reform the armed forces, in particular “to maintain the nuclear missile component at the most advanced level.”

“The country still faces many tasks and problems that need to be addressed,” the Program concludes. “We know how to tackle them. We have the will, the knowledge and the team to do so,” the ideologists promise. One would like to hope so.