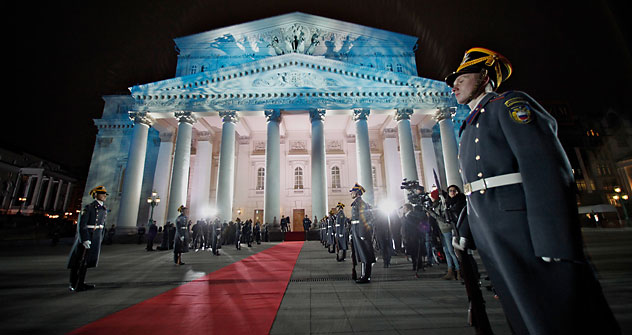 A dark theater for six years, the Bolshoi Theater’s main stage and opera house hopes to reclaim its role as Russia’s cultural heart.

The historic and world-renowned Bolshoi Theater reopened its regal doors 28th of September after six years of reconstruction, controversy and consternation. It begins its 236th season with a beloved, safe and traditional repertoire, still slightly resisting the 21stcentury.

The international community of music-lovers and balletomanes was very saddened, when, in the summer of 2005, they found their beloved Bolshoi Theater shuttered and surrounded by scaffolding. Three years without the Bolshoi! Some foreign diplomats and expatriates were devastated when they realized they would complete their postings without ever seeing the heralded Main Stage.

As it turned out, the art and music world would have to wait much longer for its beloved Bolshoi.

The start of the theater’s dramatic renovation did not come a moment too soon, however. According to some reports, the building was in such a state of dilapidation that it was on the verge of collapse. Over time, the Bolshoi Theater audience became painfully aware that the original completion date for repairs was an arbitrary date that would never be met.

However, no one would have imagined that they would have to wait until October 2011 to enter the legendary interior again.

The Bolshoi’s director, Anatoly Iksanov, a longtime administrator, admits that he came to understand the extent of the problem only as work progressed. “New issues emerged after the closure. When we scraped off the plaster covering the walls, we discovered seven massive cracks running from the foundations to the roof. Actually, the walls were only standing thanks to their own weight,” he said in a recent interview with RIR.

Officially, the work cost $635 million. Some reports suggested that in the end the budget bloated to twice that. A federal investigation committee was formed two years ago to ensure that public money had not been siphoned off, but its conclusions have yet to be published. The Bolshoi Theater does not comment on allegations o corruption. During a recent press conference, the Bolshoi’s press secretary Katia Novikova cut short questions on the topic this week, asking reporters to “ask only questions about our recent allegations.”

Kirill Kabanov, president of the National Anti-Corruption Committee, said “Our experts agree that the final cost is actually two times more than the official one. “

A new shine on old splendor

Yet care and attention defined the restoration. The most important result of the overhaul is a vast improvement in the acoustics, according to Iksanov. There have also been aesthetic improvements. The old balcony wood has been replaced by pine from Karelia. Even the seat and curtain fabric was chosen in accordance with acoustic experts’ recommendations. Four tons of gold has been used in the theater, while Soviet symbols displayed until 2006 (such as the hammer and sickle) have given way to original tsarist symbols from 1856.

Nevertheless, Soviet dictator Josef Stalin also left his mark. Stalin had a custom workroom designed for himself in a box near the stage. The room was scrupulously restored, “but it will remain inaccessible to the public,” Iksanov said.

Thanks to a more modern design, there is even more space at the Bolshoi. This extra space will be used as rehearsal rooms, while the main stage will gain more depth. (It should also be noted that the metro line passing ever so close to the Bolshoi was closed for a few days to lay new tracks designed to reduce vibrations that could be felt even inside the concert hall.)

The Theater’s artistic policy is perfectly in tune with its time. Conservatism is a present trend and the Bolshoi will still rank itself among the most traditional in the world. “We are going to direct great operas and ballets from the past, it is our top priority,” noted Anatoly Iksanov. “More modern productions shall be reserved for the New Stage, where the approach shall be more creative.”

During the last decade, the Bolshoi Theater rarely surprised or shocked its audience. One of the few exceptions was the creation of the “Children of Rosenthal” opera by Leonid Desyatnikov and Vladimir Sorokin—the first world premiere of an opera at the Bolshoi in a quarter century. Former artistic director of the Bolshoi Ballet, Alexei Ratmansky, also focused on forgotten avant garde works of the 1920s. Of course, these works are only shown on the intimate New Stage, an adjacent theater of a more modest size opened in late 2002.

The 236th season will open with “Ruslan and Ludmila,” a symbolic opera often regarded by musicologists as the birth of the Russian lyrical genre. The production will be directed by Vladimir Yurovsky and staged by Dmitry Chernyakov. The work is based on a Pushkin novel. In fact Pushkin, Russia’s most treasured writer, was supposed to write the libretto. He died in a duel instead.

The first ballet of the season, “Sleeping Beauty,” with original choregraphy by Marius Petipa, revisited by the Bolshoi’s art director, Yuri Grigorovich, will open in November. Later in the season, “The Knight of the Rose” by Richard Strauss and “Charodeika” by Tchaikovsky, will represent the only other new productions of a modest first season. Lovers of contemporary dance can also look forward to the fresh, breathtaking work of choreographer William Forsythe.

Ticket prices will spike this year, putting the Bolshoi more in line with the other major opera houses. At press time, tickets were already sold out until January. The only way to secure a seat before spring for the prestigious main stage is through the black market.