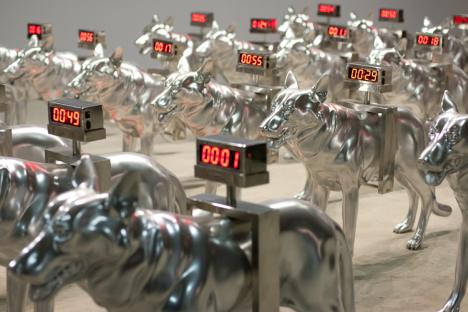 Forget drawing and painting. The Fourth Moscow Biennale focused on an interactive artistic life in which viewers were compelled to participate.

The Fourth Biennale's technological and interactive orientation resonated with Muscovites. Source: The press service of the Fourth Moscow Biennale of Contemporary Art

Visitors to the main exhibition at the Fourth Moscow Biennale, “Rewriting Worlds,” were confronted by a hugely oversized gas mask – a work entitled “Big Green Head” by the Russian group Electroboutique. Inside the gas mask’s goggles, a fiery apocalypse raged. The informational plaque on the wall stated that the interactive installation required the viewer to take their clothes off, and the apocalyptic landscape would turn into a blossoming nature scene—perhaps a nod to the mischievous irony of the Russian Nonconformists.

This populist work also has a transparent meaning: that only a person who is pure, literally and metaphorically naked, can return to their natural state. The concept is an appropriate preparation for the more active role viewers were asked to take on for this year’s show, in which passive spectators were asked to become “active users” taking part in the creation of a work of art.

The main principle of this biennale was interactivity. The works were not just for looking at: visitors had to touch them, talk to them, jump in front of them, get inside them, step over them, tread on them and even stamp on them. For most museumgoers, this experience was both unfamiliar and uncomfortable.

But the brief cultural shock and disorientation was swiftly replaced by the sensation of a gadget shop. This is exactly what was expected of the Fourth Biennale’s curator, Peter Weibel, who is a pioneer and promoter of new media in art.

In Russia, where people have maintained an attitude of piety towards the most traditional medium of artistic expression – painting – it’s not that easy to find artists who can satisfy Weibel’s tastes. As a result, only 14 out of 194 of the biennale’s participants were Russian.  The young artist Taisiya Korotkova’s “Technology” – a sterile expanses of laboratories, created with the aid of an archaic artistic technique, distemper on board – looked like a kind of ironic comment on this.

But the limited Russian participation was not entirely due to a lack of artists; not all the Russians invited by the Austrian curator were able to take part in the biennale. The organizers declined to finance the works of many of them, citing a lack of funding from the Russian Ministry of Culture.

“We received a letter in January inviting us to take part in the Moscow Biennale, but actually we didn’t take part,” said Max Iliukhin, a member of the Art Business Consulting group. “The reason is prosaic: The organizers stated that they didn’t have the €1,500 ($2,000) we needed. This was unexpected, because the first thing I asked the biennale organizers when I received the invitation to take part was: How is the financing going? They assured me that first the project is approved with the curator and then the funds are allocated. Weibel accepted our project, but nevertheless the funds for it were not found.”

Those who did take part in the biennale made no secret of the fact that they paid for their works out of their own pockets or those of their dealers. And the organizers did not pay Russian artists to take part, although in the past an honorarium of €2,000 ($2,700) was the norm. But most participants were not concerned by this. Many of the Russian artists selected by Weibel are at the start of their career, and for them, taking part in the biennale at all is a strong leverage point for their future negotiations with art dealers and curators.

But despite the obvious financial difficulties and the organizational muddle, the “Rewriting Worlds” project nevertheless achieved some real success.

The biennale exhibits were displayed in two emblematic locations at the same time: on the fourth floor of the TsUM department store – Moscow’s equivalent to the New York’s Saks Fifth Avenue – and at the ArtPlay design center, which is a refurbished factory.

The Fourth Biennale was successful in terms of the attention it received from visitors, and rightly so. The exhibition’s technological and interactive orientation resonated with Muscovites, who are crazy about technical toys, and the themes that Weibel presented are also local favorites. These included: contacts with extraterrestrial civilizations (Susan Hiller’s sound installation “Witnesses”), terrorism (“The Garden of Error and Decay” by Michael Bielicky and Kamila B. Richter), fashionable Asian cinema (Isaac Julien), oil (several artists have touched on this theme) and traffic jams (Ai Weiwei).