SCO a catalyst for Afghan stability 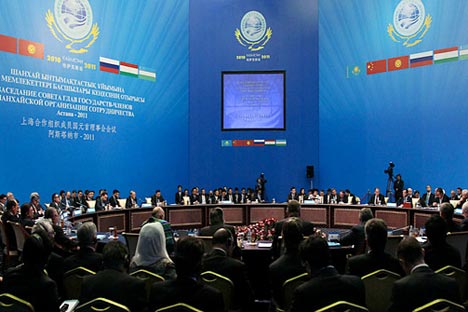 The six-nation SCO has a critical role in stabilising Afghanistan and the region after the withdrawal of the coalition forces from the violence-torn country in 2014, says Nivedita Das Kundu.

With the Nato troops expected to complete their phased pull-out from Afghanistan by 2014, there are renewed concerns about security of the violence-torn country and the viability of regional initiatives. New ideas will, however, have to be contextualised to tackle fresh geopolitical settings while keeping in mind the region’s interest. While most of the discourse acknowledges the relevance and utility of a regional mechanism, the Shanghai Cooperation Organization (SCO) is one institution which is already is in place and is trying to forge dynamic and strong policies, which could go a long way in  addressing the regional security concerns.

The SCO,  an inter-governmental international organisation founded in Shanghai on June 15, 2001, comprises  six countries -- China, Russia, Kazakhstan, Kyrgyzstan, Tajikistan and Uzbekistan. The six-nation body is focused on fighting the evils of terrorism, extremism, and separatism on the one hand and on creating a web of regional prosperity on the other. India, Mongolia, Iran, Pakistan (all observer states) have expressed their strong desire to become full members of the organization. India and Pakistan are considered as the favorites for getting full membership of the SCO by 2014. It is expected that Afghanistan will soon be upgraded to the status of an observer from that of the dialogue partner so that it can play a more active role in the organization. (Other SCO dialogue partners are Srilanka and Belarus). Most of the SCO member/observer states share common border with Afghanistan; Afghanistan’s significance for Tajikistan, Turkmenistan and Uzbekistan is immense as these countries share close historical and cultural ties with the people of Afghanistan. The people of northern Afghanistan are essentially of the same ethnic stock as Central Asian Uzbeks, Tajiks and Turkmen. Consequently, the two decades of festering crisis in Afghanistan have impacted these countries as well.

During the Soviet period, Central Asia bore the burden of causalities from the war in Afghanistan. In recent years, the Islamic Movement of Uzbekistan (IMU) was provided bases, training and access to the arms market by the Taliban. The IMU, with the Taliban support, carried out incursions into Uzbekistan and Kyrgyzstan. Further, refuges from the Afghan civil war in Tajikistan were influenced by developments in Afghanistan. Also, much of Afghanistan’s drug production flows to Europe through Central Asia. All these factors argue for a more active role for the SCO in Afghanistan for the sake of maintaining peace and stability in the region. Moreover, when the Nato forces leave Afghanistan by 2014, Afghanistan will not yet be ready to fully assume responsibility for its own security. Security forces will need to be trained and equipped. Infrastructure projects will have to be designed to improve the quality of life and to integrate Afghanistan better so that this country could play its role as the hub between Central and South Asia.

There is, of course, no denying that India (currently an observer, which is expected to become a full member) can contribute a lot to stabilizing Afghanistan along with other SCO states. India has contributed substantially to the reconstruction of Afghanistan, which has won enormous goodwill among Afghans. But India's activities have been hampered by the deteriorating security situation and constant efforts of extremist groups to sabotage it's reconstruction work in that country. Recently India signed a landmark strategic partnership agreement with Afghanistan during Afghan President Hamid Karzai’s visit to India on October 4. Besides providing a framework for expanding multifarious relations between India and Afghanistan, the pact significantly envisages a role for India in providing training to the Afghan National Security Forces and the police.

Most of Central Asian SCO states bordering Afghanistan appreciate India’s role in Afghanistan and have assured India their full support. New Delhi has emphasized the importance of regional cooperation as  this can help in addressing trans-border issues, developing commercial and economic opportunity and ending cross-border infiltration and terrorism. Moreover, the SCO might be amenable to the idea of a co-security partnership with NATO. This is because the SCO, unlike NATO or Collective Security Treaty Organization (CSTO), lacks the identity of a military bloc. Till date, the SCO has not planned any military involvement in Afghanistan, but now this could happen with growing security concerns related to drugs trafficking and arms smuggling.

In fact, common approaches to combating terrorism and stabilizing the situation in Afghanistan have become the basis for SCO’s broader cooperation with the NATO. The trend towards cooperation between the Western powers and the SCO on the Afghan issue received an impetus after Barack Obama came to power in Washington. The SCO is now ready to cooperate with the West on the Afghan issue. This convergence of positions led to consultations that took place between the NATO and the SCO on Afghanistan. Initially, a special conference on Afghanistan was held in Moscow on March 27, 2009 under the SCO’s aegis where NATO countries also participated. The conference resulted in a ‘SCO-Afghanistan Action Plan’ that called for closer SCO involvement in Afghanistan and wide collaboration in fighting terrorism and drug trafficking in the region. As SCO members and observers surround Afghanistan, the action plan appears to be a roadmap to eventually draw Afghanistan into the SCO fold. The US and the SCO are already exploring ways of working together to ensure a transition from a NATO-led operation in Afghanistan to one where the regional countries take the lead.