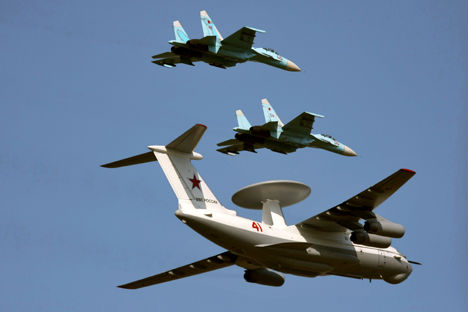 Russia had produced some 40 aircraft, based on A-50 over the decades. Source: KMO

The Russian Air Force has deployed the upgraded version of the Beriev A-50 flying radar. It is also jointly developing flying radar based on the A-50, designed together with India.

Designers of the new Airborne Warning And Control System (AWACS) aircraft have overhauled most of its computing hardware and software and combat stations, reported military spokesman Colonel Vladimir Drik.

“The aircraft underwent a deep modernization which took into account reports from the units where such vehicles are used. The result is a great improvement in a number of specifications of the A-50U AWACS,” he said.

Thanks to the upgrade the flying radar now has a greater range, improved target identification and better satellite communication capability. It can better track cruise missiles and supersonic aircraft and is more reliable overall, the Air Forces officer added.

The media earlier reported that the replacement hardware for the A-50U project allows it to track more targets and direct more friend-fighters. It also weighs less than the old equipment, which allows the aircraft to remain in the air longer before refueling.

The A-50 AWACS are based on the Ilyushin Il-76 transport which first entered service in 1984. Russia had produced some 40 such aircraft over the decades. It is also jointly developing flying radar based on the A-50, designed together with India.