Medvedev tries branding the way to an IFC 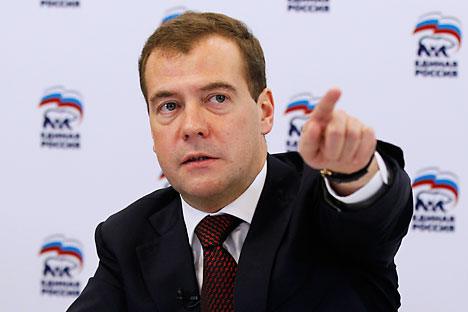 Russia's President Dmitri Medvedev claims that if Russia has learned how to build theaters "it can also build an international financial center.” Source: ITAR-TASS

Russia's attempts to make Moscow an international financial center have been met with skepticism by some experts.

In his ongoing quest to develop Moscow into an International Financial Center (IFC), Russian President Dmitry Medvedev met with leading international bankers, investors and consultants on Oct. 28. Attending the meeting at the headquarters of Sberbank, Russia’s biggest bank, were the likes of Jamie Dimon, chief of JPMorgan Chase, and Stephen Schwarzman, head of the Blackstone Group.

Medvedev originally floated the idea of making Moscow an IFC in 2008, but plans were sidelined due to the global financial crisis. But in 2010, as the situation improved, he set up an International Advisory Board, and in May 2011 appointed former Kremlin Chief of Staff Alexander Voloshin to head the Kremlin’s task force in charge of developing Moscow’s international financial clout.

Addressing the Oct. 28 meeting, Medvedev said that the aim of setting up an IFC was to give a qualitatively new impulse to the economy and create new jobs, but major problems remain, some of which are totally outside Russia’s control, and some not.

“The discussions of our plans to develop a financial center in Russia will be based on the trends and events now taking place on all financial markets. We are not at all happy with these trends. But I’ll tell you frankly - that makes us all the more determined to create an IFC in Moscow,” Medvedev said.

Closer to home, Medvedev said that while the idea of an IFC was still undergoing development, major decisions had already been made, “in particular, to merge our two biggest stock exchanges and a fully agreed bill about a central depositary.” This legislation is expected to pass the State Duma and come into effect by the end of this year. Also under discussion are proposals to streamline taxes on financial transactions

The merger and central depositary are major steps in the right direction, but there is still a long way to go. In the strictest sense of the word, the only real International Financial Centers are, in fact, London and New York. Russia will have its work cut out for it to get anywhere near this level. It is hard to imagine, for instance, American, European or Japanese companies deciding to raise money or list in Moscow as opposed to London or New York.

“Recently, we’ve tried to work actively, and I would like you to assess openly what we did right, and what we did wrong. And I would ask you to do so without being too diplomatic,” said Medvedev, noting that the advantage of having such members on the council was their ability to state the whole truth.

Medvedev also said that modern financial instruments would allow Russia to increase the Russian market’s competitiveness and increase capital. “In accordance with the agreement reached earlier, we will obviously regard the IFC as an integral part of Russia’s economy. That makes things more complicated, because the Russian economy has its problems and difficulties,” said Medvedev, before segueing into an invitation for the council’s members to attend the opening of the revamped Bolshoi Theater that same evening.

“We’ve learned how to build theaters,” said Medvedev, “so I hope we can also build an international financial center.”

Unfortunately, this kind of approach is more akin to the typical kind of grandstanding that Russia and numerous other emerging markets so often confuse with substance. But big, supposedly prestige projects that generate headlines, and invitations to high-level people to tell governments what they should already know are no substitute for real progress.

Russia needs to get down to serious consulting work to solve its problems. Far and away the most effective way to move forward is to spend time with the people directly involved to find out where the real barriers to change lie, and then working with stakeholders to see what can be done. But of course this professional approach garners no headlines.

In short, Russia still displays a very shaky understanding of modern business and marketing. At the opening of the Bolshoi Theater that evening, Medvedev noted that Russia had few national “brands,” but that the Bolshoi was one of Russia’s greatest.

The concept of “nation branding” is well established, and it’s clear what Medvedev has in mind, but it’s equally clear that calling an expression of high culture such as the Bolshoi Theater a “brand” like some commercial product merely demeans it.

The Bolshoi is yet another mega prestige project, as Medvedev admitted in so many words during his speech: “Our country has always found money to ensure that the Bolshoi was in the right condition. We did this 150 years ago, and we’re doing it again now.”

As Medvedev noted, the reconstruction took six years. What he did not mention were the huge schedule and cost overruns and the numerous allegations of corruption that accompanied the work – and which are all too typical of such projects in Russia.

Similar points apply to Skolkovo, Russia’s much-vaunted high-tech hub now under construction outside Moscow, which again Medvedev sees as a “brand.” The view is that big investments rather than quality products and services automatically create brands.

Many Russians and foreigner see such projects not as “brands,” however, but as “hype.” As so often, Russia is doing things a little backwards, putting style before substance. The country is moving in the right direction, but it hasn’t arrived yet.

Stephen Wells is Head of Capital Markets at ESC and a former Chief Economist at the London Stock Exchange who has consulted to governments, regulators and stock exchanges world-wide.