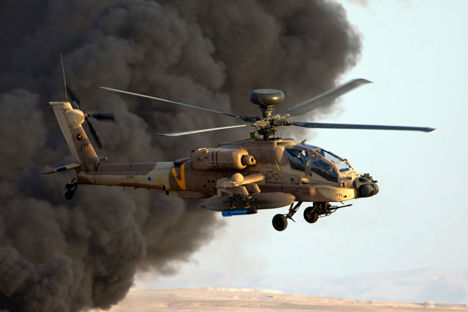 India has decided to purchase American AH-64D Apache Longbow attack helicopters, news agencies reported, citing a source in the Ministry of Defence. The decision to buy American helicopters was taken after opening the tender for the supply of 22 combat vehicles, in which the Apache Longbow beat out the Russian Mi-28N Night Hunter attack helicopter in the finals. According to media reports, the Apache was chosen after comparative tests of the two vehicles, performed in late 2010.

The tests included firing practice of the helicopters’ weapons. The Indian contingent was apparently more impressed with the Apache. A representative for the Western Air Command in New Delhi noted that “both machines worked perfectly, but the U.S. one was superior in key features such as increased capabilities and all-weather use.”

Such definitions (“increased capabilities” and “superior all-weather use”) are particularly slippery. Experts familiar with the Mi-28N insist that it has the very same capabilities as the Apache. To be sure, the “Twenty-Eight,” like any other vehicle, has its drawbacks – its relatively ineffective radar system and weak night sight capabilities, for example. These disadvantages perhaps evoked some frustration among Indian pilots. The helicopter is called the Night Hunter and its reputation is ill-served when it falls short precisely in its night time operability. The organisers of the tender reportedly listed another 20 points of criticism that kept the Russian chopper from winning the tender.

All of these criticisms are more or less valid. But many military experts believe that they are unlikely to have played a decisive role in determining the tender’s winner. At the end of the day, the on-board radar system andnight vision capabilities could have been improved before delivering the Mi-28N to the Indian army. This could have included working with foreign companies and using equipment made outside of the Russian Federation. That’s what happened with the Su-30MKI, for instance, whose avionics include French, Israeli and Indian equipment, which serve only to increase the aircraft’s combat capabilities. Similar upgrades could be carried out on the Night Hunter. But New Delhi was not interested. Why?

In our opinion, there are a number of reasons for this. The main reason for the selection of the AH-64D over the Mi-28N is the fact that the Russian Hunter has only just been put into operation in its own country – the Russian Air Force currently owns just twenty Mi-28Ns. As General Nikolai Makarov, the armed forces’ chief of general staff, said that the troops should be supplied with 15 of the helicopters each year, but the first delivery won’t be complete until 2015. So the Indian Air Force (IAF) would have to wait until the end of this period for Russian manufacturers to start work on helicopters for New Delhi. And this is unacceptable to them.

Boeing’s Apache Longbow, on the other hand, will soon be twenty years old – and its first model, more than 1,000 of which are currently in operation, is almost thirty years old. Today, it acts as the main strike force of the U.S. Army’s helicopter fleet. Major upgrades began in 2006 to improve the combat vehicle’s efficiency, a process that the Pentagon hopes will result in the new 284AH-64D helicopter. It is not certain that India will get the latest version of the Apache, but the previous model is also quite a good purchase. So the Indian generals have probably made the right decision here.

There is one more important reason why the American Apache AH-64D was chosen in the competition between two arguably equal combat vehicles. It comes down to the principle of not putting all your eggs in one basket. The approach of India’s Armed Forces to procuring combat equipment is one of diversification. This approach does have its drawbacks – the varying requirements for servicing vehicles, for example, will be expensive and burdensome for the army and the economy when it comes to repairs, upgrades, and importing spare parts. On the other hand, India won’t be held hostage to the interests of one specific government. Currently, 70–80% of India’s military equipment is Soviet or Russian-made. The complicated processes taking place in Russia’s military-industrial complex – including technological change, rising prices for the supply of materials and power components, energy costs, the training and development of qualified technical staff – all of these impinges on the military contracts signed by New Delhi and Moscow. The perceived delays and the quality of the products delivered also influences the process. It’s certainly understandable that India does not want to be dependent on the prolonged restructuring of the domestic defence industry. And perhaps it's right in its own way.

But on the other hand, this doesn’t mean that New Delhi should abandon Moscow, a tried-and-tested partner in military-technical cooperation. Russia has a number of advantages over other countries when it comes to supplying military equipment. First of all, Russia has been doing this for over fifty years – it has experienced both success and failure (with successes far outweighing the failures). Secondly, and perhaps most importantly, Russia has never used its arms supply, the sale of licences and manufacturing to local enterprises, or upgrades as leverage against India in political matters. This, however, is something that Washington does on a regular basis.

The Mi-26T, for example, can carry up to 20 tonnes of cargo, while the Chinook can carry just 13.5 tonnes in the fuselage or 14.5 tonnes in external store. There have been instances in Afghanistan when our Mi-26 helicopters have pulled damaged American CH-47s and AS-532s out of mountain clefts. The Russian Ka-226T light helicopter is also a superb vehicle, notable for its unique modular ability to change function at a moment’s notice. It can be used for land, sea, mountain or jungle rescue, or as an air ambulance; it can also patrol specially protected areas, deploy parachute infantries in remote locations, and carry small cargo on an external sling or inside the cabin. Its exceptional hovering precision, superlative manoeuvrability, excellent power consumption, simple operation and maintenance, and compactness surpass the technical quality of any similar helicopter. And given its relatively low cost for purchase and maintenance, it is clear that this machine stands a very good chance of winning the Indian tender.

It is, of course, up to the Indian Air Force to decide which vehicle they prefer. In Moscow, there’s no doubt that New Delhi will make the right choice.