Russia looking out for its own, makes an offer to Europe 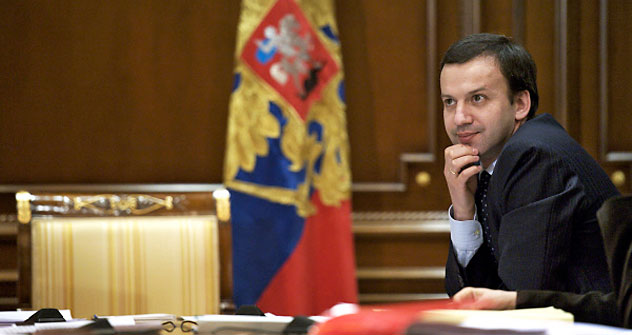 Moscow's pledge to give the $ 10 billion loan to EU has some experts raising eyebrows.

Russia appears to be joining China in offering assistance to the European Union in order to fight its debt crisis. Russia plans to make its offer via the IMF, and is also leaving the door open for some bilateral deals with EU countries, according to Arkady Dvorkovich, a top economic aide to President Dmitry Medvedev. Dvorkovich mentioned that the volume of such help is likely to be up to $10 billion. With the amount really a token one, not even sufficient to provide for a routine tranche of international assistance to Greece alone (the next tranche, approved on Oct. 21, is expected to be worth 8 billion euros), Russia’s offer must be considered more of a political gesture.

But in this case, even politics appear important. The recent volatility of the financial markets, caused, in large part, by doubts about the stability of the finances of European governments, has caused a lot of damage to emerging market countries, Russia included. A decline in appetite for risk and a flight to quality have nearly shut down the Russian financial markets for new borrowers since early August, and only now are issuers attempting to re-open them. Similarly, in the past few weeks the ruble lost 15 percent of its value while domestic interest rates increased dramatically. Although all of this has since improved, it has only done so as a result of an improvement of the market environment in Europe, which was itself the result of the adoption of a new financial plan by the European governments. The deterioration in market financial conditions in Russia has demonstrated just how interconnected the country is with the rest of Europe and the world, so the Russian government’s readiness to help make the European Financial Stability Fund work is really its readiness to help ensure the stability of Russia’s own financial markets.

However, the token amount shows that Russia’s ability to provide such help is limited, for two reasons. One is that the Russian government – as opposed to the Central Bank – has spent most of its savings in recent years in efforts to help the economy find its way out of the crisis. As a result, its two funds – the Reserve Fund and the National Welfare Fund – only have a little over $100 billion left, and chances that the government will need these savings should oil prices fall again are quite high. The other reason is that the government clearly wants to ensure security of any financing to Europe, so providing additional funding to the IMF appears the best option. It is also perhaps not coincidental that the Fund’s managing director, Christine Lagarde, is expected to arrive in Moscow on Nov. 7, so the exact details of this transaction will likely be hammered out at that stage. Russia clearly has all sorts of political interests in Europe – ranging from competing for influence in the former Soviet Union to energy exports. But it seems that, unlike China, Russia will refrain from taking a hard line here in favor of seeking some goodwill that can be spent in other areas.

However, it is conceivable that Russia would takes a far greater role in providing funding to Europe’s bailout fund if a better infrastructure is set up. Just under half of the Russian Central Bank’s $520 billion of reserves are kept in euros. The CBR typically invests its reserves in highly liquid and AAA-rated bonds. Therefore, it would be likely that, if the Eurosystem’s common binds were to appear, the CBR would buy serious quantities of them. However, since the issuance of such bonds now appears quite slim, it is very likely that Russia’s participation in funding Europe’s financial stabilization will be quite limited and, will be contained only to IMF-related or bilateral transactions.

Alexei Moisseev is head of macroeconomic analysis at VTB Capital.