The ambassador of better will 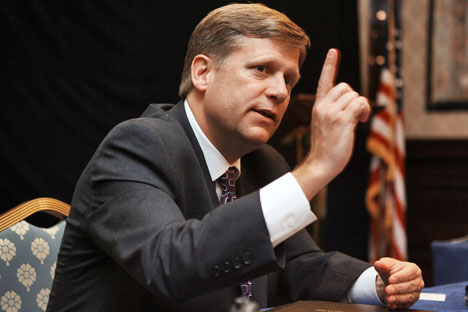 McFaul's appointment as the next American ambassador in Moscow indicates a shift in the U.S. policy toward Russia.

On Oct. 11, a day before the Foreign Relations Committee of the U.S. Senate was to begin hearings on the nomination of Michael McFaul, President Barack Obama’s top Russia adviser, as the next U.S. ambassador to Russia, the “Washington Post” published an op-ed by David Kramer, president of Freedom House, and Robert Kagan, of the Brookings Institution.  In their piece, Kramer and Kagan called on the Senate to confirm McFaul.

Uh-oh!  When two sworn enemies of the Obama administration’s policy of the “reset” voice their support for a man widely considered as one of its architects, something must be going on.

The intense media coverage of McFaul’s nomination, first announced by the White House in May, is somewhat unusual: After all, no one in Washington, DC was bubbling with excitement when John Beyrle, the current U.S. Ambassador to Russia, was sent to Moscow in 2008.  And, honestly, how many American journalists know the name of the Russian Ambassador to the United States?  For the record, it’s Sergei Kislyak.

But then, the reasons for replacing Beyrle, a career diplomat, with diplomatic novice McFaul have never been clearly articulated, although it’s true that during his tenure, Beyrle committed a couple of faux pas.  In August 2008, shortly after the beginning of military activities in South Ossetia, Beyrle irritated his superiors at the State Department by claiming that Russia’s response to the attack by the Georgian military on Russian peacekeepers was justified; he later backtracked from this statement.  This “error of judgment,” however, didn’t cost Beyrle, a George W. Bush appointee, his job. Impressed with Beyrle’s credentials, the newly elected President Obama asked him to stay in Moscow.  In December 2010, though Beyrle was in hot waters again: Classified diplomatic cables posted by WikiLeaks revealed some unflattering opinions he had about the Medvedev-Putin tandem.  Obviously offended, Moscow nevertheless made it clear that it was ready to leave the WikiLeaks story behind.  Neither incident, however, prevented Beyrle from taking part in all important bilateral meetings over the past four years, including presidential summits.

Some Russian analysts, pointing to McFaul’s experience in security issues, took his nomination as a sign that Washington was planning to pay more attention to U.S.-Russia relations – just at a time when these relations are particularly troubled by seemingly irreconcilable differences over European missile defense.  Others are not so sure: They argue that if Obama needed McFaul for help in defining Russia policy, he would have kept McFaul in the White House in Washington rather than in Spaso House in Moscow where McFaul will be inevitably overwhelmed with numerous administrative chores.

The second point of view does seem to hit a nerve: should the Obama Administration pursue the policy of the “reset” in its current form, why would there be any need to replace Beyrle with McFaul – or anyone else, for that matter?  Instead, it appears that by dispatching McFaul to Moscow, the White House is sending a message that its policy toward Russia is about to change.

The shift in U.S. policy toward Russia seems to grow from purely domestic roots.  Preparing for a tough re-election campaign next year – and weathering a tsunami of criticism for his economic policies – President Obama has chosen the path many of his predecessors have traveled: he has begun promoting his national security and foreign policy successes.  The policy of the “reset” with Russia is one of the administration’s most obvious achievements in the international arena: Obama can point to a new arms control agreement and also to increased cooperation with Russia on Afghanistan and Iran.  Yet, critics of the “reset,” such as Kramer and Kagan, keep arguing that its benefits came at a price: willful ignorance of what they call “Russia’s deteriorating human rights situation.”  To deflect this criticism, the Obama Administration has apparently decided to shift the focus of its Russia policy on human rights issues.

Here McFaul’s credentials as an academic with a strong track record of “democracy promotion” come in handy.  So does his scathing criticism of then-President Vladimir Putin’s policies in 2000-2008.  And the title of McFaul’s latest book – “Advancing democracy abroad: why we should and how we can” – must have had the same effect on Kramer and Kagan as the sound of a horn does on a hunting horse.

Evidently, the White House decided not to wait until McFaul’s confirmation by the Senate to introduce the new “twist” in its policy vis-à-vis Moscow.  A couple of weeks ago, Michael Posner, U.S. Assistant Secretary of State for the Bureau of Democracy, Human Rights, and Labor, went to Russia on a six-day trip.  While traveling in Moscow, Nizhny Novgorod and Kazan and meeting with Russia’s civil activists, Posner played the role of a Goodwill Ambassador of sorts, delivering a preachy message that ”the United States would ‘redouble’ its efforts to make sure Russia heeded international norms on human rights.” If Posner’s “goodwill” mission is an example of what the White House expects of the next U.S. ambassador to Russia, then there is no doubt that McFaul – who, unlike Posner, lived in Russia and speaks fluent Russian – will be an even better Goodwill Ambassador than Posner.  What will happen to the “reset” McFaul reportedly helped to architect, remains to be seen.