India, Pakistan getting into SCO tent 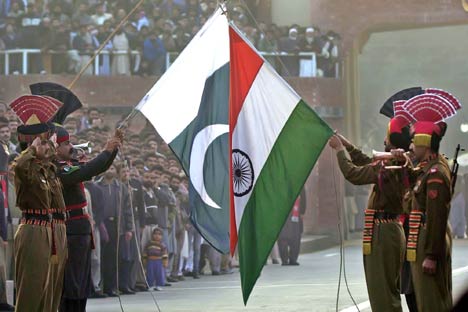 Moscow has revealed that the Russian-Chinese political consultations in the Russian capital on Monday discussed India’s membership of the Shanghai Cooperation Organization (SCO).

Moscow has revealed that the Russian-Chinese political consultations in the Russian capital on Monday discussed India’s membership of the Shanghai Cooperation Organization (SCO). The Russian Ministry of Foreighn Affairs (MFA) said the two sides had an “in-depth exchange of views” on the agenda for the forthcoming SCO heads of governments meeting in St.Petersburg next week on Monday and they “spoke for accelerating the process of enlargement of the SCO”.

Most significantly, the MFA statement named India and Pakistan. A Russian-Chinese consensus position seems to have been reached, finally, with regard to granting India membership formally at the next SCO summit, which China is hosting.
To be sure, the robust moves by the United States to unfurl the New Silk Road and to form an OSCE-like organisation for regional security in South Asia have given impetus to the decision by Russia and China to expedite india and Pakistan’s SCO membership.
The US scheme envisages the western powers and NATO, EU, et al, on the driving seat of a regional security architecture in South Asia. The visiting French FM Alain Juppe sounded out Delhi about the idea, which was to have been unfolded formally in Istanbul tomorrow during the conference on Afghanistan by Hillary Clinton, US secretary of state. (Clinton has cancelled her trip Istanbul at the last minute due to her mother’s illness.).
India is unlikely to warm up to the idea of a western-sponsored regional security architecture for South Asia (but may prefer to leave it to Pakistan to kill the idea). Indeed, Pakistan has apparently voiced reservations to the Turks who are organising the Istanbul conference. Pakistan apprehends - rightly so - that the western game plan is to pressure and isolate it within the four walls of a regional forum.
The western powers are pushing for the idea in the hope to mediate/reconcile the various contradictions in the intra-regional relationships in the region that are impeding an enduring Afghan settlement - Kashmir problem, India-Pakistan ties, Durand Line, Afghan-Pakistan relations and so on.
Conceivably, Russia and China would take a dim view of the western move to establish hegemony over Central and South Asia. The mother of all ironies is that Moscow and Beijing are offering to Turkey a formal SCO status as well, just when Turkey is acting as the handmaiden for the US projects on New Silk Road and the regional mechanism for South Asia. It is a meaningful poser to Ankara to make up its mind as to which is its real personality. The Russian MFA press release is here.

M K Bhadrakumar is a former Indian career diplomat who has served in Islamabad, Kabul, Tashkent and Moscow. Read his blog at http://blogs.rediff.com/mkbhadrakumar/