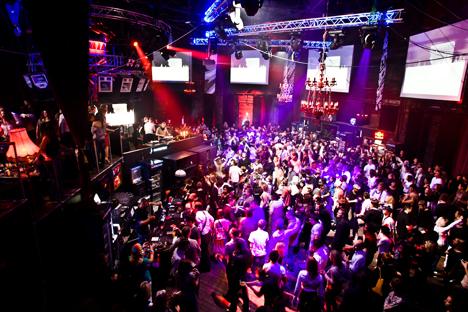 Moscow will keep you partying all night long and, if you’re up to it, several days in a row.

You have to be flexible enough to enjoy the Moscow nightlife, know the right places for your taste and have a cool crowd to join you. My advice: Do not plan too much, just see where you end up.

Start with a relaxed after-work cocktail or light dinner, simply pick up your phone and end up hours later dancing on the bar trying to hold on to your notebook and being embarrassed about your boring business style. As for me, after a long day of work, I am usually not much in the mood for partying, especially after a hard day of Moscow business life, so if I made plans to go out, I would probably give up in the planning stage. It’s better to rely on the spark that hopefully comes with the first cocktail.

In Moscow they are so many ways of having fun. From cheap to expensive – it all depends on your taste and wallet. If you want it really Soviet, you ought to try Chebureyki bar. I can highly recommend the one on Solyansky Proyezd near Kitai-Gorod metro station (Solyansky Proyezd). This totally unspectacular, extra plain, well-lit stand buffet has no bar flair whatsoever, but you will enjoy Chebureyki (which is a fat-fried something filled with meat or cheese) on plastic plates, next to a real Russian man. Vodka or cognac is sold in bottles, consumed out of plastic cups. And it features absolutely affordable prices – the chebureyki go for less than 100 rubles ($4). More of a wine person? A good wine selection with delicious snacks is served at “Prostyie Veshi” (Simple Things) a small wine bar not far from the Kremlin on Bolshaya Nikitskaya. Given the small interior, it is recommended to reserve a place, even during the week.

Another nice place to pre-party is Starlite Diner. It serves typical burgers and fries, a good base for the long alcohol binge of the night ahead. And keep this place in mind also for an early morning breakfast – it is a 24hour diner, and in the mornings it is not uncommon to see the party crowds from the previous night. It has all-day breakfast, and the prices are very much ok (about 300 rubles ($10) for a burger with fries.)

It is time for some cocktails? Something with a touch of exotic can be found at Tiki Bar. The interior is decent, and not over the top, and it features cocktails in the range of 300 rubles. Right next to it is the Real McCoy, a well-known expat hangout. You should check out their program in advance since occasionally there is great live music and dancing, otherwise it’s a bit boring – unless you’re a foreigner hoping to pick up a date. Both bars are located next to metro station Barrikadnaya.

A bit more expensive is partying on the roofs of the many 5-star hotels in town. Try the O2 bar at the Ritz-Carlton. Some people like it, although a cocktail goes for around 1,000 rubles ($30). The Radisson Royal (former the Hotel Ukraina) has a restaurant with a panoramic view, which is a very comfortable place to chill out with your business partner. The Hyatt Ararat has a nice roof bar as well, however during a recent Friday evening visit, there was a suspiciously large crowd of old and rather sleazy guys with semi-trashy ladies and escorts. A bit more distinctive is the Kalina bar in Lotte Plaza on Novinsky Bulvar. With a great view over the city, you can sip some cosmopolitans and try your superstar qualities in karaoke. If you want to see some young expats lusting after some cowgirls, visit Crazy Daisy. The bar there is specifically made for female guests to dance on, encouraged by the baristas. The highlight is a tequila-based cocktail called “salty tits.” As you might guess, this is not served in a glass.

Most people have heard about the famous clubs, such as Club Raj, Pasha and Soho Rooms. If not, you will surely find many other blogs (or semi-advertisements) about those clubs on the web anyways. Night Flights may be familiar to many, due to its reputation as the address for the expat who wants to find some fun tonight. No further explanation needed, apart from a short note about the price: For about $300, your night there can get a little sweeter.

Stop – Face control? Moscow has a reputation for this. However, many clubs and party organizers are responding to the demand of many party people who have had enough of this pseudo-exclusivity. A good place with none of the drama is Sushi Rumba. By day a restaurant with decent Asian food, at night it becomes a cocktail bar, karaoke rooms and dance club. It has decent prices (around 300 rubles per cocktail) and easy-going crowd. The Hard Rock Café on Old Arbat is also an all-in-one place with a restaurant during the day, that has more of a bar feeling at night. Another good place for pub lovers who are interested in beer, cider and some delicious chicken wings is the John Donne Pub (various locations, including Nikitsky Bulvar).

And there is so much more! Enjoy the party scene in Moscow – which is available to you every day of the week. Just whatever you do, do not party on the streets. Drinking in the streets is illegal and will result in continuing your party at the local police station.