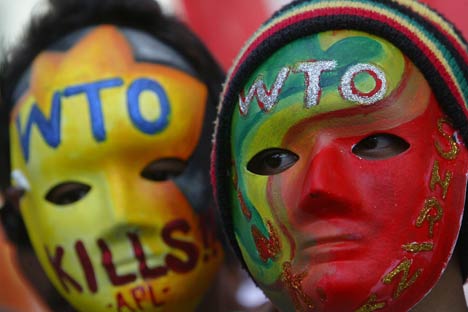 Will Russia benefit from joining the World Trade Organization?

Better late than never. This might be a reaction among investors and businessmen in both West and East on announcement that Russia has completed its 18-year long march towards membership in the World Trade Organization. The Ministry for Economic Development says that Russia’s entry will be approved by the WTO General Council in mid-December.

Russia’s accession would surely be a feat for the international trade club. Membership of one of the world’s largest countries seems to be a silver lining in the dark cloud now shadowing the global economy in general and the WTO in particular. The Doha round of trade talks between developing and developed countries on trade in agricultural goods that started in Qatar a decade ago have stalled, and will not be resumed in the near future. So the WTO needs to welcome Russia just to raise its political prestige, not to mention the benefits Russia’s economic growth could bring to the world economy in general

For Russia’s part, WTO membership will hardly affect the country’s economic performance in the near future. However, the long accession marathon was not wasted. By many counts, the terms squeezed by Russian negotiators from their trading partners are favorable for the country’s economy and trade. They ensure undiscriminating access of Russian products to foreign markets, which in international trade speak is called “most favored nation” status. Russia can also use the WTO’s trade disputes settlement mechanism. Membership would create a more favorable climate for foreign investment in Russia as well as better opportunities for Russian investment in the WTO member-countries.

After entry, Russia would also be able to defend its economic interests by participation in negotiations on international trade agreements. A still more important concession to Moscow is the provision of a transition period during which access of foreign merchandise to the domestic market would be limited. It is presumed that during this time Russian businesses would upgrade their production technologies and marketing techniques to challenge international competition.

Nevertheless, no matter how good the terms of WTO entry, it would be unwise to say that “all is well that ends well.” Although Russia can now join the World Trade Organization, it should not do so because its economy is inherently weak and uncompetitive. Moreover, membership in the WTO would maintain this order of things for the foreseeable future unless the government radically alters its socio-economic policies, which have made the country a lame duck even among the emerging countries. This paradox can be understood by scrutinizing the basic realities of Russian economic life.

First, Russia’s export product base is steadily deteriorating. A World Bank report explains: “Oil and gas composed less than half of total exports in 2000. In 10 years, this figure had grown to two-thirds of total exports, with an additional 15 percent of exports coming from other extractive commodities and only 9 percent from high-tech exports, mainly in the defense industry.” After 20 years of talk from the Kremlin about the need to diversify and modernize the economy, Russia’s economy still relies on the extractive industries. With revenue from oil exports covering half of the federal budget, the country fully depends on the whims of world energy prices. Joining the WTO now means to accept its secondary role in the international division of labor as a major supplier of raw materials.

Secondly, last summer Prime Minister Vladimir Putin argued that Russia needs WTO membership to eliminate losses of revenue from exports amounting to about $2.5 billion annually. The major losers in this discrimination are Russian steel and non-ferrous metals tycoons, who lobbied the Kremlin to join the WTO. While their oligopolies have already trained their businesses to withstand international competition, the majority of Russian manufacturing, agricultural and service companies, to say nothing of small businesses, are uncompetitive even in the domestic market. Without strong state support, prohibited by WTO rules, they would lose even after the expiration of the transition period for full accession.

Thirdly, although corruption has been condemned by the Kremlin as country’s Public Enemy No. 1, there are no visible signs it has decreased. By some estimates, the sums paid in bribes and kickbacks exceed all government tax revenue. Kickbacks in hostile corporate acquisitions and settlements in courts are measured in many millions of dollars. In the last couple of years, thousands of backhanders were indicted on corruption charges, but only hundreds were jailed. The overwhelming corruption has put Russian businesses under double taxation that makes them initially uncompetitive. The invisible hand of the market is replaced in the country by often visible hand of corruption.

And finally, many Russian entrepreneurs are easy prey for government bureaucrats and law enforcement officers who demand their share of assets or kickbacks from profits in exchange for protection. The practice bars even large companies from marketing their goods nationwide, because bureaucrats in the regions defend local businesses against outsiders. As a result, many high-quality domestic consumer products can‘t be marketed across the country. Two decades after the start of market reforms, there are only a handful of nationally recognized brand names of products “made in Russia.”

It’s no wonder that the unfriendly business climate causes domestic capital to flee the country. The Central Bank of Russia estimates that this year the capital outflow will reach $70 billion. This would be an addition to the approximately $1 trillion that has left the country since the mid-1990s. What the Russian economy badly needs now is the most favored domestic business treatment. This need is a lot more acute than the most favored nation treatment offered by the WTO membership.

It is hard to find a clearer description of attitude of the Russian political elites towards business than its comparison with the famous wisecrack by U.S. President Calvin Coolidge: “The business of America is business.” If the Kremlin could be honest, its declaration must be: ”The business of Russia is to fleece business.” With such a disposition, to push Russia’s still-nascent capitalism into the WTO will result in economic turmoil and disintegration comparable to the collapse of the Soviet Union.

Felix Goryunov is a Moscow-based economics journalist who has been covering GATT/WTO issues and international economic problems for over 30 years.