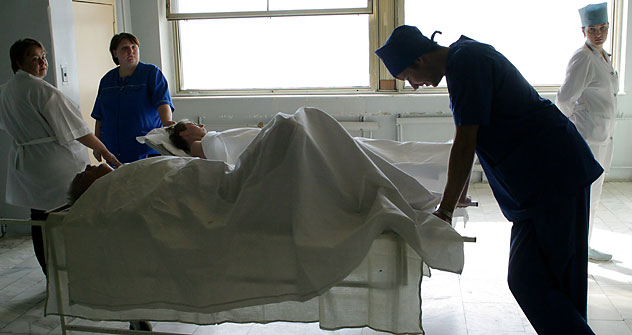 Alternative civilian service is a good option for conscripts who don't want to serve in the army. Source: PhotoXPress

Young men have the right to work in civilian jobs rather than do military service but few take that option.

This spring, about 218,000 young men were conscripted for military service. The same number is expected in the fall. Most conscripts, including conscientious objectors, are aware of their right to choose alternative civilian service (ACS) under the Russian Constitution adopted in 1993. If military service goes against the conscript’s beliefs and religion, he can instead sign up for alternative service under a law that came into effect in 2004. And despite the harsh life awaiting conscripts in the armed forces, few opt for ACS. Part of this is because the length of service required for ACS is 21 months – nine more than the 12 months required for military service, although the term of service can be cut to 18 months if the alternative service is in a military organization. Additionally, the service must be completed outside the conscript’s home region, the pay is barely enough to live on, and the jobs are undesirable and physically taxing.

Any Russian who has reached the age of conscription can opt for alternative civilian service. To do so, one has to submit an application to the draft station six months in advance of the call-up, stating the reasons for the choice, and then wait for the draft commission’s decision.

Once a year, the Ministry of Health and Social Development issues an order listing the vacancies and enterprises where those granted the right to ACS can serve. The list currently includes 633 organizations and about 5,000 jobs in 125 different fields. Most alternative conscripts work as hospital nurses, builders, house painters, foresters, librarians and general workers. In terms of wages, paid leave and days off, their rights are the same as those of other workers. But unlike other workers, the alternative conscript cannot terminate his employment contract or work somewhere else part-time, although an alternative conscript can take classes by correspondence or in the evenings, which is a significant advantage over the life of an ordinary conscript.

“The reasons that alternative service is unpopular are banal: there is a lack of proper information and myths circulating about ACS, portraying it as something mysterious and dubious,” writes Lev Levinson of the Human Rights Institute in a book entitled Alternative to Conscription. “Many still think it means four years of servitude taking out chamber pots.” Until a law changed in 2008, the term of alternative services was three-and-a-half years.

The hardest part, say human rights activists and alternative service members themselves, is to persuade the recruiters to accept an application for ACS. According to Levinson, when a young man submits an application, he talks to the recruitment officers without witnesses and is often treated harshly. ”Sometimes they tear up the applications, make threats and simply cheat by saying that the application is not properly worded.” One method frequently used to sow confusion in the young mind is to invoke stereotypes. A correspondent for Kommersant Dengi who went to a Moscow conscription center posing as the cousin of a would-be alternative conscript seeking information about ACS, was told by a recruiting officer that this was an option, but only for “mama’s boys.” He said that, during his six years in the job, he had only one conscript who opted for ACS.

Nevertheless, several conscripts have managed to successfully exercise their right to alternative service.

Last August, Levinson’s 22-year-old son Boris completed his ACS as a postman. “After finishing a college course for film projectionists, I spent two years dueling with the recruitment office, skipping four call-ups and trying to obtain permission for ACS,” Boris Levinson recalled. “They kept losing my documents and asked me to reapply. In the end, permission was granted.”

Boris said the only unpleasant thing about ACS was the need to get up early because work started at 6:15 a.m. “And one had to work Saturdays. Still, it was not the army. I was entitled to paid leave and sick leave. Like all postmen, I was paid 11,600 rubles a month,” he said.

Alexander Kovalyov from the town of Pushkin outside St. Petersburg is doing his alternative service as a janitor at the local boarding school. After earning a degree in automobile service and repair technology, Kovalyov tried to get into ACS in order not to serve in the army. “I hate being forced to do things, especially if it is in the army,” he said.

Human rights activists have long suggested that conscripts be allowed to choose the place of alternative civilian service in exchange for a repeal of any deferments except for a deferment on health grounds. “That might make alternative service more desirable for young people,” said Lev Levinson. “In the meantime, the military is quite happy with the situation as it is. Their task is to prevent people from calling their bluff and joining ACS in droves, otherwise they won’t be able to meet the recruitment targets.”

This story is abridged from the original version, which appeared in the Oct. 26, 38 edition of the Kommersant-Dengi Magazine.

About military service in Russia

Military service is mandatory in Russia for men. According to Article 59 of the Russian Constitution and the federal law on military service, every Russian man over the age of 18 is obligated to serve one year in the Russian army. Men are chosen for service through a conscription process. A conscript has the right to opt-out of military service because of his religious beliefs, but he cannot get out of his service to the state – he must instead apply for alternative civil service (ACS).

Dodging official service is illegal, and can result in criminal charges, but there are several ways to get an exemption. Service can be postponed for men enrolled in universities, and those who have completed courses in high schools in the Reserve Officers Training Corps are also exempt from conscription. Conscripts can be exempt for health reasons upon providing necessary documentation. Men can be conscripted until they reach the age of 27.