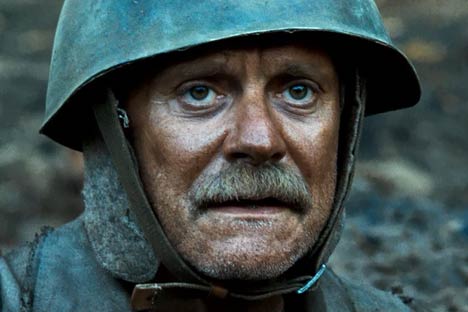 While many voices within the Russian film community believe that the American Academy wants to see Hollywood-style foreign fare, the evidence suggests that the more art-house and “foreign” a film, the better the chance for selection. Source: Kinopois

The decision to nominate Mikhalkov's “Burnt By the Sun 2: Citadel” as the country’s official submission for the Best Foreign Language Film reflects an ongoing fight over what sort of Russian film should be.

Bashing Nikita Mikhalkov seems to be the rage in Russia these days, and who can blame those taking part in it?  When the Russian Oscar committee decided at the end of September to forward Mikhalkov’s “Burnt By the Sun 2: Citadel” as the country’s official submission for the Best Foreign Language Film, the resulting furor generated front-page headlines. This controversy followed that over Mikhalkov’s 10,000 word conservative manifesto, “Right and Truth,” which he issued last October. It also came on the heels of the director’s unlicensed use of a “migalka,” or blue siren, captured by commuters on cell phones this past May that showed the director weaving in and out of Moscow traffic. Mikhalkov, it is fair to say, has become a polarizing figure in Russia, a focal point for many complaints about the state of Russian politics, society, and culture.

When “Burnt By the Sun 2: Citadel” premiered in May, a few weeks before the blue siren episode broke, it became the most widely-panned film in Russia since last May’s appearance of “Burnt By the Sun 2: Exodus.” Collectively, the two films cost over $50 million to make and earned less than $10 million. Critics savaged both; audiences by and large dismissed them. Most interpreted the films as shameless attempts to capitalize on the renewed interest in World War II in Russia and to promote a brand of state patriotism.

The decision to choose the second sequel as Russia’s Oscar candidate smacks of egoism and nepotism, ironically two attributes Mikhalkov denounced in his manifesto. Moreover, Mikhalkov serves on the Oscar committee and put his own film forward. In a year that saw Andrei Zvyagintsev’s “Elena” win a special jury prize at Cannes and Aleksandr Sokurov’s “Faust” capture the Golden Lion at Venice, the committee was hardly short of good candidates for a film that could potentially make the American Academy’s final list. Russian media reports mostly agreed that picking Mikhalkov’s flop meant that the cronyism rampant in Russian politics spilled over into the cultural world. And, given that Mikhalkov has made no secret of his love for Vladimir Putin, the charge is a sound one.

When the committee held its vote, chairman Vladimir Menshov, the Oscar-winning director of “Moscow Does Not Believe in Tears,” broke with tradition and went public. He argued that there was something not quite right about a committee member advancing his own film and that the film was critically drubbed and commercially unsuccessful, calling on Mikhalkov to reconsider. Even Mikhalkov’s brother, Andrei Konchalovsky, came out against the decision, declaring that it made no sense to submit the second part of a sequel. He also stated that he had quit the Oscar committee three years ago because it was not capable of making the right decisions.

"Cinema history is full of follow-ups far inferior to their predecessors, but rarely has it thrown up a sequel quite so contrary to the spirit of the film that spawned it as "Burnt by the Sun 2: Exodus,” wrote Leslie Felperin in "Variety." “Given that "Exodus," reputedly the most expensive post-Soviet Russian pic ever made, crashed and burned even in home territory on May release, offshore auds are hardly likely to warm to this much more than their Russian counterparts did."

But beyond the squabbling, which has a lot to do with the fierce hatred many feel for a director who airs his personal and political views so publically, it is not hard to see why a Nikita Mikhalkov film would be selected.  “Burnt By the Sun 2: Citadel” is the fifth movie by Mikhalkov to be forwarded to the Academy.  His previous track record is impressive. His 1992 “Close to Eden” made the final Oscar list. His 1994 “Burnt By the Sun” won. “The Barber of Siberia,” Mikhalkov’s 1998 epic, was disqualified apparently because the print did not arrive on time. His 2007 “12” made the final list.  Mikhalkov’s movies have therefore made the final cut more than all other Russian films submitted since 1992 combined:  Sergei Bodrov’s 1996 “Prisoner of the Mountains” and Pavel Chukhrai’s “The Thief” in 1997 were the only other finalists. Given this history, unparalleled in Russian cinema, there is logic to forwarding one of his films for the Academy’s consideration, even one universally acknowledged as bad.

The decision reflects an ongoing fight over what sort of Russian film should be chosen. The last decade’s submissions have alternated between more traditional art-house movies, which most foreign viewers interpret as “Russian,” and popular blockbusters that marry Hollywood-style effects and techniques to “Russian” themes.  Zvyagintsev’s 2003 “The Return,” Andrei Kravchuk’s 2005 “The Italian,” and Anna Melikian’s 2008 “The Mermaid” were all art-house, critical successes that did not earn huge box office returns.  None of them made the final list. Timur Bekmambetov’s 2004 “Night Watch” and Fedor Bondarchuk’s 2005 “Ninth Company” are the epitome of the new Russian patriotic blockbusters that have done well in theaters and still earned critical acclaim. They too did not make the Academy’s shortlist.  Last year, the Oscar Committee chose Alexei Uchitel’’s “The Edge,” set in the special camps of the postwar Stalinist system. Uchitel’, previously known for his art-house films such as “His Wife’s Diary” (2000), which the Russian Committee selected, openly declared he made “The Edge” in the style of a Hollywood blockbuster.  Although it did not make the final five on Oscar night, it was a finalist for the Golden Globe.  Meanwhile, Mikhalkov’s “12, “based on Sidney Lumet’s “Twelve Angry Men,” was the last Russian film to make the shortlist and was a commercial success with an art-house feel.

While many voices within the Russian film community believe that the American Academy wants to see Hollywood-style foreign fare, the evidence suggests that the more art-house and “foreign” a film, the better the chance for selection.  All three of Mikhalkov’s films to make the shortlist conformed to what many believe a “Russian foreign film” should be like:  deliberately placed and philosophical.  Of course, the same could be said of many films that did not make the final cut.  The Academy will select nine films for a shortlist and announce them a week before other Oscar nominations are announced.  In the end, whether the committee submitted the film out of crass cronyism, because of Mikhalkov’s previous record, or from a belief that the film could make the shortlist because it was an American-like blockbuster full of special effects, it seems clear that they made a bad choice.

The Huffington Post reported in recent weeks that Menshov was still waiting for a response from Mikhalkov, adding that the sequel would most likely be ignored by Academy Award voters.

However Kirk Honeycutt of the Associated Press, in a story picked up Hollywood Reporter, was kinder to the film than most, suggesting it wasn't as bad as Russian critics think it is. Still, there is little hope that Mikhalkov will reignite the international attention he once commanded.