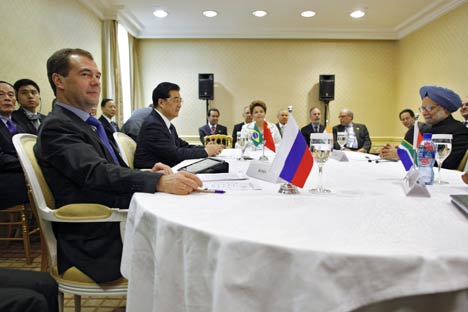 Brasil, India, Russia, China are getting stronger together. Source: Reuters

The 3-4 November 2011 G-20 summit at Cannes that grappled with various raging issues governing the world economy particularly the Euro zone crisis also brought into focus the rising profile of BRICS as a major player towards resolving global issues including the financial crisis, - Strategic Culture Foundation reports. As rightly pointed out by Russia’s top economic advisor Arkady Dvorkovich prior to the summit, BRICS countries have enhanced their position in international politics to play a decisive role in salvaging the global crisis, and also towards playing a greater role in shaping policies of global financial bodies like International Monetary Fund (IMF) and World Bank. The statement issued after the meeting of the grouping also pointed out that the grouping will cooperate with the Euro zone countries and European Union, which represent the largest economy in the world, and that can be achieved through multilateral coordination in global financial bodies.

Will BRICS rescue eurozone from disaster?

Some of the developments can be noticed in the meeting of the grouping that took place at Hotel Carlton on 3 November 2011, which were perhaps not starkly visible in earlier meetings of BRICS. The grouping took a coordinated position that though the emerging power centre will play a positive role to help bail out the countries like Greece from the crisis, it is the Euro zone that must be at the lead to find out solutions to the crisis. In this sense, the countries refrained from emphasizing any measures or policies which may appear imposing or taking advantage of the fragile situation in Europe. Chinese President, Hu Jintao expressed hope that European Union will be able to resolve the crisis and urged that “international community should provide support and help” to the region to come out of the crisis. The BRICS countries acknowledged that the Euro zone crisis is a crisis of global proportion, and unless it is recovered expeditiously, it may further deteriorate global economic scenario. The grouping further emphasized that in order to resolve the crisis, it is very necessary that the process must be democratic, with emerging powers having due share in the decision making process. The statement at the end of the meeting read, “The leaders agreed that the Euro zone sovereign debt crisis was a matter of serious concern for the global economy and had caused fresh instability and volatility in markets after the 2008 economic crisis,” and pointed out that the members agreed that “the only way to emerge from this crisis was to ensure rapid economic growth in a sustained and balanced manner, on a global basis.”

Besides these collective maneuvers, the members of the grouping also came forward individually to contribute towards resolution of the crisis. The potentials of these fast growing economies towards resolving the crisis is no minimal, and this was clearly reflected in the statements of the leaders of BRICS. Indian Finance Minister, Pranab Mukherjee observed that, “Our assessment of the situation is let them (Eurozone) make a credible assessment of solvency issue, try to sort out those problems and then supplementary financing could be considered.” India’s Planning Commission Deputy Chairman Montek Singh Ahluwalia observed, “So far there is no bilateral request. But we are ready to help. We cannot afford the crisis spilling over to the world at large.” Russian President, Dmitry Medvedev stated at Cannes that Russia is interested to help the crisis prone countries. He like other BRICS leaders emphasized on “the necessity for the BRICS to come up with a common stance.” He emphasized, “We have to help preserve one of the world’s leading currencies.” He further stated, “We are all interested in preserving the euro, not just the Europeans, the Russian Federation, China and other countries.” Russia has also reportedly decided to offer $10 billion through the IMF, which may be increased further in coming days. Similarly, Brazilian President Rousseff revealed that her country will play a significant role towards mitigating the Euro zone crisis. One of the mechanisms to salvage the Euro zone countries from crisis is to buy European Financial Stability Fund (EFSF) bonds. There are prospects that the emerging powers including the BRICS grouping will buy these bonds so that capital may be infused to the region’s financial markets. As agreed by the Euro zone leaders, the EFSF capacity may be increased to one trillion Euros. Already, Asian countries hold 40 percent of EFSF debt, which itself shows the rising prowess of BRICS countries, particularly China which is the largest exporter to the European Union.

Though there are apprehensions as to exactly what will be modus operandi to guide the bailout process, there is unanimity that international financial bodies must play larger role, and which can be possible by larger involvement of the grouping. There are also concerns as to what exactly these countries will get in return while helping the Euro zone to come out of the crisis. The forthcoming BRICS summit to be held in New Delhi in March 2012 will likely further strengthen the group bonding, and help these countries evolve common policies on various global issues of importance.

The rise of BRICS (Brazil, Russia, India, China and South Africa – the last one joined the group last year) within a span of three years since its formal inauguration in Russian city of Yekaterinburg in 2008 is really phenomenal… These countries not only represent engines of growth and change in a rapid pace, but also represent the rising aspirations of emerging powers and their importance in the global scene. The grouping, whose genesis was predicted in a report in 2003, has impacted the global politics and economics in myriad ways. It has represented the shift in the balance of power. The members, whether deliberations at the United Nations Security Council, or G-20, or summits of importance like the one of climate change, have coordinated their efforts to emerge as a single voice. Whether it is the crisis in Arab or the crisis in global finance, the grouping has largely coordinated their policies. The Chinese leader Xie Xuren, who echoed the sentiment of the grouping at 2009 G-20 summit at Horsham, had rightly observed that these countries demand for a ‘fair and square, compatible and orderly’ world order. In this summit an agreement was reached to grant increasing voting rights to emerging economies at global bodies like IMF, but which could not take place on ground due to ensuing global financial crisis. The G20 summit at Seoul last year agreed for 6 per cent shift of quota shares in IMF to emerging economies. With the passing of months, the profile of the grouping will likely grow further. With increasing clout of these countries in global scene, and with their rising voice in various global bodies, it is but a matter of time that the global order will be more representative.