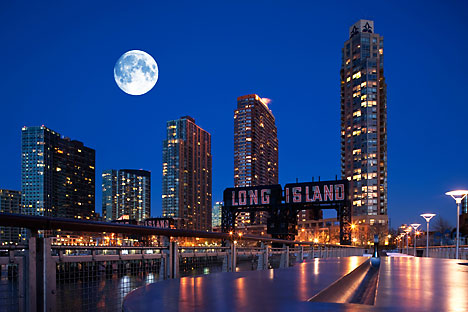 Russians and citizens from other post-Soviet states have become steady buyers of premium property in New York City and on Long Island. According to experts, demand for property among Russian-speaking non-residents in the United States has doubled over the past two years and continues to grow.

The typical Russian property buyer is a businessman aged 35–45, married with adult children. Their favorite locations are Manhattan and some parts of Long Island, especially the posh Hamptons. Property in vacation areas like Florida is also in demand.

Edward Mermelstein, an attorney and managing partner with Rheem Bell & Mermelstein LLP, says that in his 20 years of practice, he has never before seen this kind of buying spree among Russians. The average price of property in Manhattan is $3 million, and the greatest demand is for luxury apartments in New York’s most upscale buildings. “I rarely see Russians buying property for less than $800,000–900,000,” Mermelstein said.

Almost half of the deals his company handles involve clients from Russia and Ukraine. More recently, the number of clients from Kazakhstan has increased.

The most important thing for Russian buyers is a prestigious location. Location, according to Mermelstein, boosts the price by 30–40 percent compared with similar apartments in other places. “Russians usually buy real estate in the best buildings in prime locations, focusing on Park Avenue, Central Park West, Central Park South, 5th Avenue and 57th street. You often hear a Russian client asking where the best buildings and best apartments are,” said Victoria Logvinsky, vice president of Douglas Elliman Real Estate.

Logvinsky believes one of the reasons for the run on real estate is “deferred demand,” in which clients have money to go ahead with transactions they put on hold a couple years back.

Experts attribute the increased demand among foreigners to the economic situation in their home countries. The dollar is weakening against their local currencies, which allows them to buy apartments they could not afford in the past. Logvinsky named “capital flight in connection with the unstable political situation in Russia” as another motive for Russians buying American real estate.

Not all Russian buyers are thinking of obtaining a green card at the time of the deal. Real estate lawyer Anna Gerzon says that many of her clients who already own property in New York are content with tourist visas that allow them to stay in the country for six months, visiting the city on vacation. “They don’t care that they have no status in the country, they just come here to relax,” she said.

Many come to the U.S. on tourist visas to look for property and make a deal. Mermelstein notes that owning property in the U.S. is not grounds for obtaining a green card or immigration clearance, though he agrees that many of his clients see property in New York as a “safe landing” opportunity for their families.

Logvinsky describes these purchases as a “new trend.” “These are wealthy people over 40 whose children are just over 20. It’s logical that parents are looking for two- or three-bedroom apartments for their children,” she said. “Very often it is the woman who initiates the purchase. Believing and investing in real estate is very much part of the Russian mentality,” Logvinsky said.

Logvinsky has also noticed an influx of Russians from London, which has been a popular place of residence for wealthy Russians. “I also worked with some Russians who are tired of London and looking to move their families and business here to NYC,” said Logvinsky.

In addition to New York proper, the Russian-speaking diaspora is invading the Hamptons area of Long Island, which is famous as the vacation home of New York’s elite, including former mayor Rudolph Giuliani, current mayor Michael Bloomberg, Bill and Hillary Clinton, and many others.

Logvinsky notes that many Russians who used to rent homes in the south of France for the summer have been showing more interest in renting homes in the Hamptons this year. Russian businessman Igor Sosnin paid a record $850,000 to rent a house for the summer season. Russian composer Igor Krutoy, who already owns an apartment at The Plaza in New York, is finishing a house in the Hamptons; it should be completed next year.

Experts believe that high-end real estate is still a good investment right now. “Obviously, the cost of floor space will grow. Today we are at the 2004–2005 level,” said Mermelstein. In 2008–2009 it was possible to get a 20–25 percent discount on the current price. Now the prices have stabilized, but there is still a bargaining margin of some 10 percent, according to Logvinsky.

Although most Russians prefer to buy, there are increasing numbers of foreigners renting high-end property. “Young people with good taste, the children of rich parents who were used to a certain quality of life back home and want to live in the same conditions when they come to study in New York,” Logvinsky said, describing the renters.

Most sales transactions, especially those involving Russian clients, are handled by fly-by-night incorporated firms that cannot be traced to the names of the buyers. Real estate lawyer Anna Gerzon says it is a common practice in her field to open a new LLC just to conduct a purchase and sale deal. According to Gerzon, Russian clients like to make sweeping renovations immediately after buying a property.

“Russian clients always know what they want, and it has to be expensive. Immediately after the purchase, they either have the property renovated or rearranged by famous designers. They like everything new and with the maximum amenities, such as a gym and a shop. They want everything to be within easy reach, Gerzon said. And, she added, “our people adore skyscrapers.”