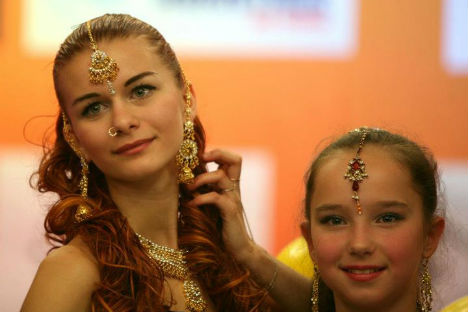 Diwali celebration traditionally brings together the Indian community in Moscow. But people of other cultural and religious backgrounds often join in the celebrations of the Festival of Lights.

This Saturday the celebration of Diwali in the Gubkin Cultural Centre represented an impressive mélange of languages and attires. One could hear Hindi, English or Russian from all directions, and the spacious hall on the first floor of the Gubkin Cultural Centre was filled with large groups of people where anyone seemed to know everyone else. Before the festive concert a lottery was held. I’m not sure what the main prize was because the winner didn’t come to get it but this was a case in which the competition was even more captivating for the participants than the award itself. The children were particularly thrilled running along the stage and emitting delighted squeals every time the announcer was declared a number, adding to the whole cacophony of sounds.

It was a spectacular view too. People looked and were dressed very differently. A lot of men were wearing festive kurtis, some were clad in elegant business-suits. Some women changed their footwear to sandals or flip-flops but most were wearing autumn boots with their gorgeous varicolored saris or, more frequently, kurtis. This clothing combination unimaginable in India looked like a perfect symbolical portrayal of Diwali being carried to Russia. I was particularly impressed with a little girl wearing a light vapory kurti and heavy winter boots feeling perfectly comfortable. This is, I thought, a manifestation of the adaptation art that Indians have honed to perfection: being flexible with what they can’t change (aka freezing November cold in Russia) and still expressing their unique cultural self through colorful clothing attires.

There seemed to be about 1,000 guests at the festival. There were also several Pakistanis among them. When I asked what the reason for their coming to the Hindu holiday was, the reply was that there are not so many Pakistanis residing in Moscow, and they are linked closely with the Indian community, and sometimes join the festivities out for sheer interest for the cultural events or for the sake of seeing their friends. I was a little surprised seeing a few Russian couples among the guests. So, as it turns, Diwali is one of the occasions that brings together not only Hindus and Jains but also welcomes people of every origin and confession to celebrate the triumph of the good over the evil.

The high point of the celebration was Indian Ambassador Ajay Malhotra’s lighting the candle and giving a concise but very hearty congratulatory speech crowned with the solemn final words: “You can take Indians out of India but you can’t take India out of Indians”.

The festive concert that followed presented a splendid succession of dances including fast dances that charged the audience with energy and made the viewers cheer and applaud enthusiastically, as well as beautiful slow dancing performances plunging viewers into a contemplating, philosophical mood. Besides traditional Indian dances, there were also performances with a mixture of dance elements created under the influence of Arabic dance movements, which added to the multifaceted festivities.