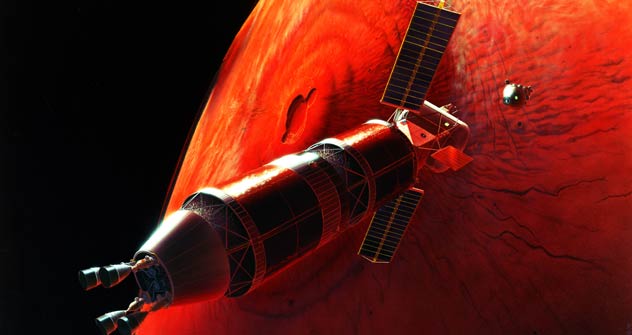 It remains to be seen to what extent the Mars-500 international project will contribute to the exploration of the Red Planet.

The ambitious ground-based simulated manned mission to Mars, Mars-500, came to a close.

Conducted by the Russian Academy of Science’s Institute of Biomedical Problems and designed as the preparation stage for a long-duration space flight, the Mars-500 experiment did not answer the question of whether humans can fly far deep into space and return unscathed, but it increased our understanding of the challenges of long space journeys.

Launched on June 3, 2010, the Mars-500 mission put an international crew of six – three Russians, one Chinese man, and two representatives from the European Space Agency, an Italian and a Frechman – in small modules simulating a spaceship headed for Mars. The mission lasted 520 days. Each participant will be paid 3 million rubles ($100,000) for their contribution to science.

A real international mission to Mars could take place after 2030 according to Roscosmos Deputy Head Vitaly Davydov. “We are planning on flying to Mars after 2030, in the mid-30s. That means many of us will live to see this remarkable event,” Davydov said at a press conference following the completion of the experiment.

Davydov emphasized that Roscosmos, along with well the European and Chinese space agencies, would make use of the scientific data obtained from the 520-day simulated flight to the Red Planet.

“We are developing a national space strategy through 2030 based on a federal target program we are preparing for the period through 2025. We will definitely take into account the Mars-500 findings,” Davydov added.

The ground-based mock spaceship was built onsite at the Institute of Biomedical Problems in Moscow. It consisted of a landing module, an experiment module, living quarters, storage and a greenhouse. There was also a separate module simulating Mars’s surface.

The main goal of the experiment was to study human responses to extreme stress when there’s nowhere to escape or obtain help. While physical survival in isolation is possible, things otherwise taken for granted on Earth, such as a variety of events and easy communication, are missing. Time becomes an abstraction, and the days blend together. The lack of personal space or opportunity to have privacy takes a very heavy psychological toll.

According to one of the participants in the experiment, “Our beds were basically three-tier bunks, with the bottom one almost at ground level. We decided to switch bunks every 10 days, since it was hard to sleep on the bottom bunk due to the high concentration of carbon dioxide.”

There were no serious conflicts among the Mars-500 experiment participants; the men locked up in the capsule mainly had to battle monotony and boredom, especially after the simulated landing on Mars in February of this year.

Adaptation to cultural differences was more challenging, however. For example, the Frenchman and the Italian couldn’t understand why the Russians wholeheartedly celebrated the New Year but ignored Christmas. But according to Bubeev, communication with the Chinese participant was the hardest of all, to the extent that e-books on Chinese culture had to be sent to the “spaceship.”

One of the biggest challenges presented by interplanetary missions is the creation of systems that sustain the biological needs of the people in space. Any person onboard a spacecraft is completely dependent on its life support system, and the systems planned for use in interplanetary missions will be radically different from the one installed at the ISS for example, which is not a full-cycle, self-contained biosphere. Developing a system capable of providing fully regenerating life-critical components will take at least 10 years.

Microgravity also presents an enormous threat to the human body. Zero gravity conditions were not simulated during the Mars-500 experiment, but earlier American research indicates that people who spend a long time in space suffer from bone mass loss. Observation of 13 astronauts, each of whom had spent six months at the ISS, revealed a 14 percent loss of skeletal strength compared to before the flight.

Despite total isolation, the crew of Mars-500 was still working in the comfort of complete control from the ground. But in the vicinity of the real Mars, where a signal from Earth takes 40 minutes to arrive and where decisions may need to be made in just seconds, it won’t be possible to video chat with family or send letters, postcards, newspapers, or gifts with a cargo ship or visiting crew.

Andrei Kislyakov is a commentator for Voice of Russia.