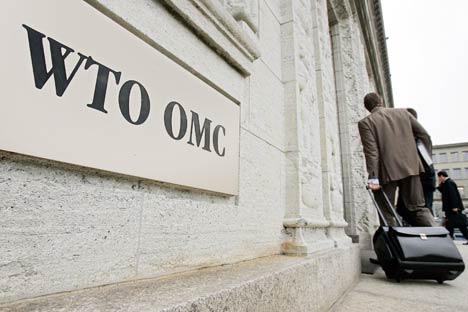 What economic consequences will Russia's accession to WTO result in?

Russia reached an agreement with Georgia on a bilateral deal late Wednesday night that paves the way for its much-anticipated entry into the World Trade Organization, Reuters reported. "We are happy that Georgia supported the draft agreement and that finally an agreement has been reached," said Maxim Medvedkov, Russia's top negotiator in accession talks, Reuters reported.

Russian entry, which now looks all but certain to take place by the end of the year, would come after 18 years of negotiations and represent the biggest step in world trade liberalization since China joined a decade ago. Russia, the largest economy outside the WTO, has an economic output of $1.9 trillion, or about 2.8 percent of the world economy.

After Wednesday's agreement, the next step on the path to membership will be a previously scheduled meeting of the Working Party on Russia's Accession, chaired by Stefan Johannesson, on Nov. 10 and 11. The group intends to complete its work and forward recommendations to a ministerial conference due Dec. 15-17 for making a final decision about approval of Russia's entry. Russia then will have to sign a protocol of accession stating that it accepts the approved "accessions package." The parliament will have to ratify the protocol, usually within three months from signing. Thirty days after, the applicant government notifies the WTO Secretariat that it has completed its ratification procedures, the applicant government becomes a full member of the WTO.

Below is a breakdown of how entry into the WTO will affect some of the biggest sectors of the Russian economy.

Russia reserved the right to mete out subsidies to farmers after entry, but the amount of money will gradually decrease by 2017, President Dmitry Medvedev said in July. The government will also retain the right to increase import duties on some agricultural products to help the domestic sector, he said.

The impact of WTO accession is likely to have only a limited impact on the industry which provides 40 percent of government revenue, the exportation of natural resources. Oil and gas are exempt from import tariffs by other countries.But Ildar Davletshin, an oil and gas analyst at Renaissance Capital, said that membership in the WTO could usher in some minor changes to the sector. There may be new pressure to lower natural gas prices from the European Union, which is seeking to reduce Gazprom's stranglehold on the supply market. And the oil and gas services industry, which provides equipment, may become more competitive. Davletshin stressed that any changes would be "marginal" and would occur "in steps rather than in one go."

With Russia's entry, imported consumer goods will become more accessible for shoppers, Alfa Bank chief economist Natalia Orlova said. Most foreign goods in Russia are currently sold at 30 percent to 40 percent mark-up from their original prices on the average because of high import tariffs. WTO membership will eventually make prices on consumer goods more compatible since new products will appear on the market and importing goods will become cheaper, Orlova said. But an overnight "collapse" of prices is not likely, she added.

Russia's accession could result in domestic steelmakers increasing exports to the European Union, since the current restrictions for exporting Russian rolled steel to Europe are likely to be canceled, said Dmitry Smolin, an analyst at UralSib Capital. Domestic steelmakers have been limited to exporting a certain amount of rolled steel to Europe annually since the European Union introduced quotas regulating Russian supplies in 2002.

"Theoretically, the WTO entry might result in canceling these quotas," Smolin said.

The companies are allowed to export a total of 3.3 million tons of rolled steel this year, compared with 3.4 million tons in 2010, he said. However, it might take more than three years after Russia joins the organization for the restrictions to be canceled, since the WTO entry doesn't mean that the quotas will be canceled automatically, Smolin said.

Another problem is that demand for rolled steel in Europe hasn't fully recovered after the 2008 crisis and is likely to remain weak for the next two years, he said.

Aviation and railways represent a mixed bag. "There's no straight answer because there are both positives and negatives for every company," said Vladimir Dorogov, an analyst with Alfa Bank. In aviation, Aeroflot will lose at least a large portion of the fees it currently charges European airlines overflying Siberia. The company does not reveal how much it makes from the practice, but the European Commission has said the fees cost airlines flying to Asian destinations $420 million in 2008.

At least part of the losses will be made up for by cheaper access to new planes and pilot hire, which will also benefit other airlines. But the impact will not be immediate: Medvedkov, Russia's chief negotiator on WTO accession, said last month that reforming the fees would be unlikely before 2013. For aircraft maker Boeing, which has been at the forefront of lobbying for ascension in both Moscow and Washington for more than 15 years, the news will come as something of a victory. "Boeing fully supports Russia's accession, as it has supported other countries in the past in the interest of free trade," said a Boeing Russia spokesman in an e-mailed statement.

Import tariffs on wide-body aircraft will be reduced from 20 percent to 7.5 percent in the four years following accession, according to data compiled by David Tarr, consultant and former lead economist at the World Bank. Russia has agreed to substantial tariff reductions in construction, agricultural and scientific equipment, as well as medical devices, he said in "Russian WTO Accession: Achievements, Impacts, Challenges." Tariffs in these sectors will average 5 percent.

Ascension will have little if any impact on Russian Railways, which is "physically and institutionally" isolated from Europe, but international documentation may ease transit of goods between Asia and Europe, said Dorogov.

Foreign and local drug makers are excited about Russia's accession, which is expected to facilitate sales of innovative drugs in the domestic market and increase its investment attractiveness. After Russia joins the organization the data exclusivity regime aimed at protecting the data of pre-clinical and clinical trials of innovative drugs will start working locally. This will result in foreign and domestic drug makers getting six years of patent protection for innovative medications to be sold locally, said Vladimir Shipkov, executive director of the Association of International Pharmaceutical Manufacturers.

The lack of data protection in current legislation makes foreign drug makers reluctant to register new medicines in Russia, since producers of generic drugs can use the data of original drugs' trials, causing losses for manufacturers of original medications. "Getting the data exclusivity regime working in Russia is a longtime dream of foreign drug makers,' Shipkov said.

Russia will significantly increase its commitments to multinational insurance providers. It will allow 100 percent foreign ownership of non-life insurance companies upon accession to the WTO. Russian prohibition of foreign participation in mandatory insurance lines as well as Russian restraints on the number of licenses granted to foreign life insurance firms will be phased out five years after accession. Russia had restrained the amount of foreign investment in the sector to about 15 percent of total investment; but as part of its accession commitments, Russia agreed to increase this limit to 50 percent.