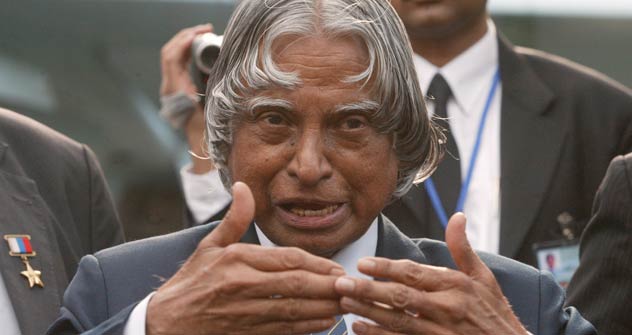 According to Dr Kalam report, the reactor would shut down automatically within 3 minutes in case of any natural disaster.

Tsunami, earthquakes. Kudankulam is out of reach for these threats. Official report endorses the safety of nuclear plant. But it failed to convince the protestors around Kudankulam. The Indian prime minister faces a serious diplomatic challenge over the Russian-built nuclear power plant ahead of his visit to Moscow in December.

Former Indian President Dr A P J Abdul Kalam came out in strong support of the Russian-built Kudankulam Nuclear Power Plant.  Dr Kalam said this week that the project met the 4 basic safety aspects of nuclear criticality, radiation, thermal hydraulic and structural integrity safety. The former president said that the people of Kudankulam did not even need to have a “nano-sized” doubt at the project’s safety.

Can Fukushima happen in Russia? No… .

An official with the Tamil Nadu state government in Chennai confirmed Indian media reports that the former president submitted a report endorsing the safety of the plant.  The report which Dr Kalam prepared along with his aide V Ponraj states that the Kudankulam Plant is in a seismic zone II, making it impossible to witness an earthquake with a magnitude of 6 points on the Richter scale.

Dr Kalam also rubbished tsunami threats to the plant, stating that Kudankulam was around 1500 kilometres from the tsunamigenic fault, making it incredibly unlikely for tsunamis to hit the area. The report added that even if there was a tsunami, the waves would lose intensity by the time they hit the plant. According to the report, the plant’s reactor is located at a height of 8.7 metres, the turbine plant at 8.1 metres, diesel generators at 9.3 metres, and the switch yard at 13 metres, making them out of reach for high tidal waves.

According to the report, the reactor would shut down automatically within 3 minutes in case of any natural disaster. The former president also said in the report that fears of radiation leakage were unfounded since the reactors have a passive heat removal system.

India Today cited the former president as saying, “We are all caught too much with the disease of fear and danger.” In remarks aimed at the protestors blockading the plant, Dr Kalam was quoted as saying, “History is not made by cowards. Sheer crowd cannot bring about changes. Only those who think everything is possible can create history and bring about changes.”

Dr Kalam also proposed a 10-point plan to the Indian Government, which would create more than 10,000 jobs, a world-class highway, a speciality hospital and educational subsidies. The measures suggested by the former president include the provision of motor boats and cold-storage facilities for fishermen, who are at the forefront of the protests.

India Today also cited Dr Kalam as claiming that a “foreign hand” was behind the protests, which he called “ill-informed and misguided.” A French protestor in Kudankulam, who spoke to RIR on the condition of anonymity, said that the protests would continue until the project was abandoned. “If Kalam is so sure of the safety, why is he trying to bribe the inhabitants of Kudankulam with jobs and infrastructure projects,” the protestor asked. “The Indian Government has a poor record of ensuring the safety of its citizens, look at Bhopal in 1984,” the protestor, who first came to India to protest against a potential French nuclear power plant in Maharashtra, said. The French protestor refused to divulge any details about the financing of the demonstrations that have marred work on the plant since the beginning of October. Officials from 2 churches in the vicinity of Kudankulam declined comment when asked if they endorsed the on-going protests and blockade of the plant.

Repeated assurances on the safety of the Kudankulam plant by senior Indian Government officials including Prime Minister Manmohan Singh have failed to convince the protestors around Kudankulam. Analysts in India and Russia have suggested that the Indian prime minister faces a serious diplomatic challenge over the Russian-built nuclear power plant ahead of his visit to Moscow in December.

Reed more about Kudankulam from this author: Rainy days for Kudankulam