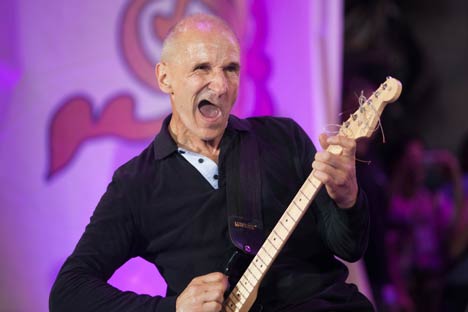 Pyotr Mamonov, an iconic Russian rock musician, is a mix of Steve Jobs and Ivan the Terrible. Source: ITAR-TASS

Actor and musician Pyotr Mamonov, an iconic figure in Russia, began his creative life in counter-culture and the avant-garde and ended up an Orthodox hermit.

It’s a starry night in southern Russia. An elderly man is sitting hunched over on a park bench. He wears a drab windbreaker and loafers. He is thin and bald, with practically almost no front teeth. He looks like a cross between Steve Jobs and Ivan the Terrible. “The world is a single organism,” he says. “If something is out of order, the whole body aches. For example, I’ve got a toothache, and all of me cries: ‘Oh! It’s the same here.’”

This is Pyotr Mamonov, once a cult figure in 1980s underground rock as part of the band Zvuki Mu, which worked with famed producer Brian Eno. “I have never seen anything like it. This man is simply possessed,” Eno once said of Mamonov. Music critics claim that Russian punk grew out of Mamonov’s shows. On stage, his magical grace and raving temperament created a genre of absurdist one-man theater that played to packed audiences for years.

But those tumultuous days are in the past: Now Mamonov seldom leaves the remote village in the Moscow Region where he has been living off the land for the last 15 years with his wife, meditating on life in between farming. Mamonov is now seeped in Orthodox spirituality, and he has minimized his contact with the outside world. “When I was 45, I found myself in an impasse and I kept thinking about those important issues: What are we doing on this Earth? And then I came to faith: the Lord revealed Himself to me. I realized why I was alive,” Mamonov says seriously.

He is still remembered by the public, though, and his rare concerts in Moscow play to full houses. Mamonov performs, among other pieces, songs from his “pre-Christian period,” explaining that the songs are intended to show people how not to live. In fact, you can hardly even call them songs. The old man plays two chords on an expensive Gibson as if he is holding a cheap battered guitar in his hands, accompanying them with ironic texts that verge on sarcasm. The critics facetiously describe this genre as “Russian blues.” His concerts are attended not only by loyal music fans but also by film buffs: Mamonov is currently better known as an actor and an Orthodox “holy fool” who speaks his mind without any inhibitions. In 2006, when he received Russia’s Best Actor award for his performance as a repentant hermit in the film “The Island (Ostrov),” Mamonov appeared before a fashionable audience in a knit cardigan, jeans, and sneakers, and lamented the crowd’s indifference to the real problems of Russia.

“Do you expect Putin to solve these problems? Putin is a wimp, an intelligence officer, what can he do? We should do it ourselves,” Mamonov said, much to the embarrassment of the show-biz stars in attendance.

“All these songs and films will be forgotten”

Mamonov was born in 1951 in the center of Moscow, the son of a translator and engineer. He formed his first band in the mid-1960s, riding the wave of Beatlemania. He soon became a wildly popular Moscow hippie. His popularity owed much to his taste and talent for titillating the public. Mamonov would behave first as a chimpanzee, then as a huge reptile, tying himself up in all sorts of knots and mimicking epileptic fits. Mamonov’s fans aptly described his act as “Russian folk hallucination.” In the 1980s, at the peak of his musical popularity, Mamonov’s life, as he admits, revolved around two things: “women and booze.” At those times, he was rarely completely sober and was always ready to pick a fight, sometimes ending up in intensive care. After recording the album “Zvuki Mu” in London in 1989, he withdrew from society and disbanded the group.

In 1988, he became a popular actor after playing a paranoid drug lord in the cult Soviet film “The Needle (Igla),” which starred Viktor Tsoi, the frontman of the iconic rock band Kino. He won international acclaim for the 1990 musical film “Taxi Blues,” which garnered an award for best director at Cannes. He continued to work with that film’s director, Pavel Lungin, in late 2000s to produce two more films, “The Island” and “The Tsar,” which collected many prizes at Russian and international film festivals. And while in “The Island” he, in fact, played himself, in “The Tsar,” he played Ivan the Terrible, famous for his brutality. He recently appeared in the year’s most successful Russian film, “Chapiteau Show,” which won a prize at the Moscow Film Festival.

But Mamonov treats his creative works with little respect: “I’ve just purchased a CD of [African-American soul singer] Solomon Burke. He had 21 children, 79 grandchildren and 17 great-grandchildren. He had a family of 300 people! That is something worth living for. And all these songs and films, they will all be gone eventually.”

“I’m crying from my swamp: don’t you come here!”

Mamonov explains that he uses his popularity to help people come closer to God. “I am a grown man, I am 60, I’ve lived my life, and I’ll die soon. We all originate from Adam; we are all one family; so how can I hide from my relatives what I understood about life?” He said recently.

The life lessons he hopes to share are simple: that man is vain, that vanity obscures the mind and that, in the end, “people stop hearing each other;” that God is the most important of all, and that “people lose Him through their sins: some through drinking, others through condemnation, envy or deceit;” that a man is himself a creator who “himself decides whether to create good or evil; it’s everyone’s personal choice.”

Mamonov says all this quietly and a bit wearily, without any sign of sarcasm or narcissism. His words reveal that his life now is an open struggle with himself.

“From my swamp, bogged down to the waist, I cry out to others: ‘Don’t you come here!’ It is not as if I stood on a mountain and taught other people. No, I’m bogged down to my waist in this swamp and I warn them: ‘Hey you, keep away from here!’ This is what I’m trying to do,” Mamonov says, adding: “We all choose byways. In this respect, I am a very good example; I often choose the longest way round. Thanks to God, He led me to the right spring. And what if he had not? What if I had died? What would I say there? ‘You know, I’ve been so busy?’”

Ethics according to Mamonov

The way Mamonov speaks is reminiscent of his quasi-blues punk songs, with one dominant theme unfolding gradually, but today his theme is “faith.” He speaks in a combination of liturgical words and slang, Gospel quotations and counterculture jargon.

“If people do not recognize God’s law, society will fall apart,” he says. “Look at Christian Europe today. There’s nothing but monuments, there is no faith, the churches are empty. Take the huge St. Peter’s in Rome, what was it built for? Why the huge size? It used to be filled with people. That’s how people lived: They put all their hopes in God, their Father, their Creator. What do we see today? Creature comforts have choked all spiritual aspirations, there is no peace in families, no children are born. Europe is a society of old people, and we are moving in the same direction – everything is slipping rapidly towards Sodom and Gomorrah.”

Even for those who do not embrace the teachings of Christianity, parts of Mamonov’s message are hard to deny: people should learn to forgive and look for the causes of failure in themselves rather than blaming others; life is all about creation and joy; material things are important, but cannot be a substitute for the meaning of life.

“As long as we are confined within our own shell – ‘Me, me, me, I am unhappy with this and that’ – we will never hear each other, or be able to live together and build this country,” Mamonov says. “In all I’ve done in my life, I’ve been sincere and honest, even in my sins and errors.” Perhaps this is the message today’s Russia needs to hear the most.