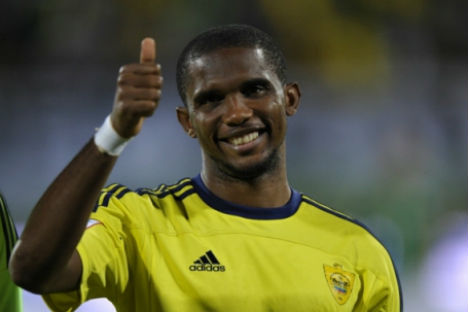 A high-flying soccer player with a $30-million price tag brings pleasure and a kick of hope to Dagestan’s capital city.

Tarlan Bakhishev, 14, has waited six hours with his friends to get a ticket to see his local soccer team, Anzhi Makhachkala. The teenagers are bubbling with excitement as they watch a training session. Somewhere out on the pitch is a Cameroonian who just put the Dagestani capital on the football map.

In one corner of the stadium, a few dozen fans perform their evening salah, the Muslim prayer, and thousands more anticipate the arrival of their latest star — striker Samuel Eto'o, formerly of Inter Milan.

Eto’o has signed with a club that one year ago couldn't attract top Russian talent, let alone the world's best players. But this two-time European Cup champion joined the Russian football club this fall on a three-year contract for a reported $30 million a year in wages.

It's nothing unusual for a lowly club to go from nowhere to attracting the best in European football in an instant. Russian oligarch Roman Abramovich transformed English club Chelsea after buying them in 2003, Manchester City are basking in the cash of the Abhu Dhabi United Group—and their recent thrashing of cross-town rival Manchester United. Anzhi, it turns out, is more than a club with a stack of cash.

The club is in Makhachkala, the capital of the Dagestan republic in Russia’s Northern Caucasus. The region is the site of an intense and long-running battle between authorities and Islamic extremists which has seen almost daily attacks. On the day Eto'o walked out onto the home ground for the first time, five people died in a series of attacks.

That was hardly an extraordinary day for the republic. The last few years have seen more than a hundred policeman killed each year in the republic of 2.6 million people.

That is why the players and their families are not living in the city, instead flying down for each game from Moscow. Eto'o has dismissed any security concerns.

“Plenty of people will be looking out for my security, and if I took this decision it’s because I don’t consider that my life or that of my family are in any danger,” he wrote on his web site. “I’ll travel there on the day of the match or the eve of the match and then I’ll go back to Moscow.”

After he was presented to fans, Eto'o--a smooth media operator who is adept at saying very little--avoided questions about the dangers of Dagestan.

However a few days before the press conference, the entire hockey club Lokomotiv Yaroslavl was killed when a Yak-42 crashed. Eto'o led a moment of silence for those who had died.

Journalists who were flown down in a Yak-42 asked Eto'o if was worried about traveling to games in Russia.

“When we sit in a plane, I always give my life up to God. It doesn't matter whether it is a Cameroonian, Spanish or Italian airline,” he said.

Club general director German Chistyakov insisted the city was safe but did admit that he had a different image of the republic before he came, “I thought that there is practically a war going on here, that tracer bullets fly and you have to crawl when you move about,” he told Russian news agency, Ria Novosti.

The money for Eto'o and the other players all comes from one man, Suleiman Kerimov, a Dagestani, and one of the more reclusive oligarchs even though he has been a member of Russia’s lower house of parliament, the Duma, and is currently a Senator.

“Kerimov doesn't give interviews, he speaks to Dagestani people through the football club,” said Enver Kisriyev, head of the Caucasus section at an academic think tank in Moscow.

Forbes magazine estimated that Kerimov is worth nearly $8 billion made through clever investments in the 1990s. He now owns one of the country's biggest gold producers but has managed to remain out of the limelight except for when he crashed his Ferrari Enzo at high speed into a tree in Nice in 2006. He was seriously injured and needed months of recovery. His passenger, Russian TV host Tina Kandelaki, was luckier but still suffered burns.

Judging by the reception for Eto'o, the club can do no wrong in Dagestan. Close to 8,000 packed into the stadium just to see a training session and more than a dozen children ran onto the pitch to try and reach and touch Eto'o.  At one point, a local Cameroonian student, who is studying medicine in Makhachkala, also ran out and dived to kiss Eto'o's feet.

Dagestan is one of the poorest republics in Russia with at least 40 per cent unemployment and club officials and Kisriyev said that Kerimov's aim is to give young people another way out, away from the route to extremism. As part of the project the club will set up seven different football centers for youths in Dagestan, bring in quality football trainers and build a new stadium.

“People are laughing, being ironical [about the project] but you have to understand the social aspect,” said Kisriyev, “I'm not saying it is a panacea and that it will get rid of Dagestan's many problems, but it will create some kind of positive movement.”

Kerimov had tried to take control of the club for at least three years said Kisriyev, but it was only possible when a new and proactive Dagestan president, Magomedsalam Magomedov, came in.

Relations between the club and the president remain close — support of a high ranking official helps soothe the problems in an often dysfunctional republic.

“You just need to ring him,” said Chistyakov about Magomedov., “Even if it is not such a serious question like the selling of water at the stadium. He always listens and tried to help when [activists] and the police do not understand each other.”

Few took the club seriously at first even after they bought Roberto Carlos, the former Brazilan international who won the World Cup in 2002, in August. He's 38 and the assumption was that he wanted one last pay day.

But the arrival of Eto'o has changed all that.

He is in the prime of his career and his arrival could attract other great players. The club sacked its Russian manager and has been linked to the world's top coaches such as Jose Mourinho of Real Madrid and top players.

“There has never been anything like this in Russian football,” said Bogdanov, the football editor at daily newspaper Sport Express, “Anything is possible if the investors are patient and invest in infrastructure.”

The club, which is in 8th position, will enter its winter break on Nov 6 before the second part of the season, which will see them fighting to win a place in European competition.

“It would be great to sign Christiano Ronaldo,” Robero Carlos told Spanish television referring to the Real Madrid striker and one of the best paid players in the world. He said that he had been trying to persuade other stars to join him at Anzhi, “Our aim is to get Anzhi on the same level as Real [Madrid] and Barcelona.”