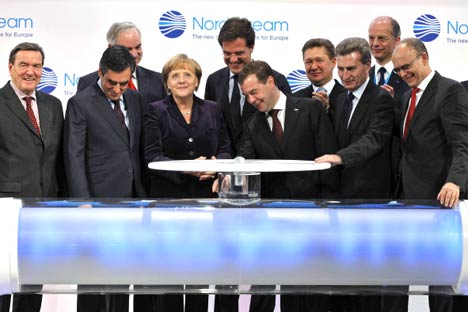 The inauguration of the long-anticipated Nord Stream pipeline gave both Russia and EU representatives the opportunity to say nice things about the other – but the actions behind the words are what counts.

On Nov. 7, Russian President Dmitry Medvedev was in Germany to take part in the official inauguration of Nord Stream, the new gas pipeline that runs along the bed of the Baltic Sea. As a result, Russia can now provide gas supplies directly to Europe and thus bypass third countries such as Ukraine and Poland.

In addition to German Chancellor Angela Merkel and former German Chancellor Gerhard Schröder, who is a member of the Nord Stream consortium, the French and Dutch Prime Ministers, Francois Fillon and Mark Rutte, also took part in the ceremony since firms from France and the Netherlands were involved in the construction along with Russian and German companies. On completion, Nord Stream will have an annual capacity of 55 billion cubic meters of gas, enough to supply some 26 million homes.

The pipeline cost 7.4 billion euros ($10.2 billion) and stretches for 1,224 kilometers (760 miles), so it was no surprise to hear Merkel say at the ceremony in the city of Lubmin on Germany’s Baltic Coast that the pipeline was the biggest energy infrastructure “of our time” and an exemplar of cooperation between Russia and the European Union.

During the ceremony, Merkel called Russia the EU’s leading energy partner. The Germany chancellor said that despite all the efforts to diversify energy supplies, the two sides would remain linked for decades, and that the energy partnership with Russia represented great opportunities.  She also noted that while the construction work proceeded surprising quickly, the legitimate interests of all the Baltic littoral states had been taken into account.

For his part, Medvedev said that the new pipeline represented “an important step in strengthening relations with the EU and Germany." During his stopover in Berlin before flying on to Lubmin with Merkel, the Russian president spoke warmly of the strategic partnership between Russia and Germany.

Medvedev also sees the pipeline as a contribution to Europe’s energy security and therefore to Europe’s overall security, and hopes for the necessary decisions to be taken in connection with the euro crisis.

But Europe has not forgotten the “gas wars” of the 2000s, when gas supplies to the continent were cut on several occasions due to quarrels over pricing between Russia and Ukraine. While Moscow rightly claimed that the problem lay in Ukraine’s inability to pay for its Russian gas, Europe was also critical of the secret contracts between the two countries and the resulting lack of transparency, which damaged the credibility of both countries. In addition, most Russian and foreign observers agree that Moscow attempted to leverage its energy resources as a geopolitical weapon to re-establish its great power status, especially vis-à-vis Europe, not least because Moscow announced an official policy to become an “energy superpower” and form a GAS OPEC.

The Nord Stream project has therefore encountered opposition amid fears that it would increase Europe’s dependence on Russian gas, although Moscow has since given up its policy of becoming an energy superpower, and the attempt to establish a GAS OPEC has failed, as most experts predicted.

In recent years, Moscow has nevertheless nurtured high hopes of exporting more gas to Europe. Germany’s decision to withdraw from atomic energy after the problems with Japan’s Fukushima nuclear plant emerged following the March 2011 tsunami boosted these hopes, especially now that that the Nord Stream pipeline will for the first time allow the direct export of gas to Germany and on to Western Europe.

But since 2008, demand for gas in Europe has fallen due to the economic slowdown, while imports of liquefied natural gas have increased and the production of shale gas has developed. In addition, research and development of alternative energy sources and other suppliers are continuing – for example, the import of hydroelectric power from Norway via electricity lines now under construction.

Medvedev’s positive note in Germany is a welcome change from Moscow’s gas wars rhetoric, which massively undermined Russia’s credibility. The new pipeline represents a splendid opportunity for Moscow to prove to Europe, and indeed the world, that it is becoming mature enough to put business above politics and great power plays, and that it is ready, willing and able to take advantage of the huge, unrealized potential for trade and cooperation between Russia and the EU.

As always, however, aggressive rhetoric aimed at Europe and the West in general could well be used in attempts to shore up domestic support – until Moscow finally realizes that business is not a zero-sum game.